Attack on Titan is a great anime show and with it comes great characters and Levi Ackerman quotes. It focuses on topics like comradeship and working together, brokenness but finding importance to make yourself whole again.

Theme of the Anime

I think the main topic is personal and power struggles. This anime taught with words, Attack on Titan quotes that are worth your salt.

This anime invokes so much sadness and pain as I have discovered while watching the series.

There are funny and sweet moments, too, but I can still feel the pain and frustrations of those people caught up in the power struggles between positions of power and those who wanted to become powerful.

Who is Levi Ackerman?

One of the persons who created a long-lasting impression is Levi Ackerman. Throughout the anime seasons, I think he smiled once or twice.

He has this serious expression or emotionless expression that makes me think he had it rough during his younger years.

In the anime, he's a commander of the Survey Corps with great ability and knows when to appreciate his subordinates. His most endearing character is his freakiness with cleanliness.

Survey Corps is the team where Armin Arlert and Eren Jaeger choose after passing the training.

Nevertheless, Levi Ackerman is one great character in AOT. So, I've gathered some meaningful quotes he said in the anime adaptation. 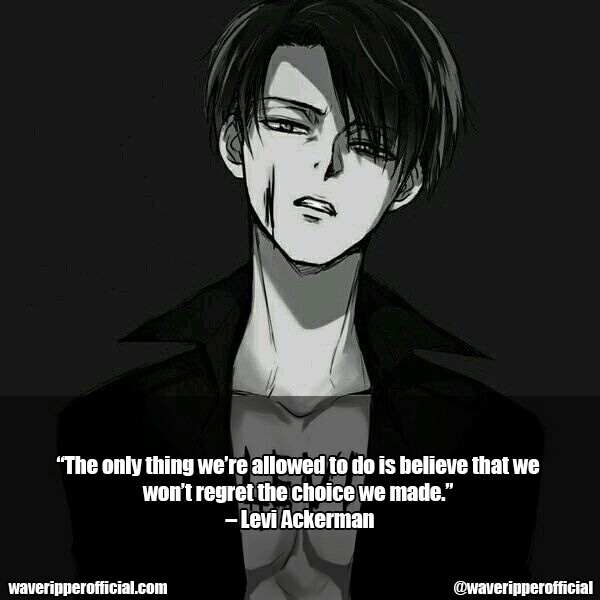 "The only thing we're allowed to do is believe that we won't regret the choice we made." - Quotes of Levi Ackerman

This one is an encouraging quote and lesson you need to learn right, no matter what. It shows how quick-witted Levi can be in gruesome situations. Yes, believing is the only thing we're allowed in any given situation.

"The lesson you need to learn right now can't be taught with words, only with action." - Quotes of Levi Ackerman

Levi prefers to teach what he knows through actions, rather than words. He is surely a man of action.

"This is just my opinion, but when it comes to teaching somebody discipline...I think pain is the most effective way." - Levi Ackerman Quotes

Yep! Levi has had it rough either during his younger years or in training for the military. He learned the concept of discipline the hard way through painful experiences.

"I don't know which option you should choose and I could never advise you on that... No matter what kind of wisdom dictates you the option you pick, no one will be able to tell if it's right or wrong until you arrive to some sort of outcome from your choice." - Levi Ackerman Quotes

This is one of Levi Ackerman quotes in the anime showing his open-minded trait. All of his comrades, including Armin Arlert, Eren Jaeger, Mikasa look up to him for his leadership.

Attack on Titan Quotes by Levi on Practicality

"If you don't want to die, think!" - Levi Ackerman Quotes

A blunt reminder! This is so true! Levi once again manifested his practical and quick-thinking skills in the anime by giving a lesson at times of great adversity. Not all could think like him and could abide by his words. But, in the end, what Levi said is true.

"The difference between your decision and ours is experience. But you don't have to rely on that." - Levi Ackerman Quotes

Levi is surely an interesting fellow. He's telling you he's superior but in the end, he's giving you the opportunity to decide for yourself. This is one difference between Levi and all other commanders in the anime.

"Whether you have the body, dead is dead." - Levi Ackerman Quotes

This quote shows his cynical but practical view of life. Even Armin Arlert is quite surprised with his demeanor.

Attack On Titan Quotes by Levi on Pain and Suffering

"A lot of time, you're going into situation you know nothing about. So what you need is to be quick to act...and make tough decisions in worst-case scenarios." - Levi Ackerman Quotes

He is a great commander indeed! Even if it's not in an anime situation. A painful experience could only bring this kind of thinking to Levi. And, he's using his position to teach and encourage his comrades about a thing or two on suffering. The brooding commander always gives his comrades a matter of choice.

"I think the best discipline is pain." - Levi Ackerman Quotes

Levi has known tremendous pain although no one seems to know more about it. Apparently, this source is not elaborated on in the anime.

He had said this quote once or twice. This painful experience might have almost broken him once and put him through a lot of suffering. But, he picked the pieces and vowed to never repeat the same mistakes again.

"I want to put an end that recurring nightmare, right now. There are those who would get in my way. But I'm fine playing the role of the lunatic who kills people like that. I have to be ready to rearrange some faces. Because I choose the hell of humans killing each other over the hell of being eaten." - Levi Ackerman Quotes

This quote is a double edge sword. Yes, he's referring to the actual situation as presented in the AOT series, which is Titans eating humans.

For him, he wants to stop this madness. He'd rather have people killing people because that's just what war is. Titans are monsters. The terror of being eaten is unthinkable.

As for the other edge, Levi could be telling the viewers that it's more acceptable when people criticize you for who you are.

But, when your devils (inside) eat your resolve and what you know about yourself, it's much more terrifying. Sometimes, it's really hard to wake up from a nightmare.

Attack On Titan Quotes in Choices and Trust

"The difference between your decision and ours is experience. But you don't have to rely on that. CHOOSE... Believe in yourself, or believe in the survey corps and me. I don't know and I never have but I can believe in my own abilities or the choices of the companions I trust. But no one ever knows how it will turn out. So choose for yourself, whichever decision you will regret the least." Levi Ackerman Quotes

This Levi Ackerman quote is another encouragement to stand up for yourself. Whatever choices you make, you must accept the consequences.

In this world, no person is going to blame you for the choice you do, no matter what. You choose the choice with the least regret. In the anime, Levi has shown that through his inspiring quotes and actions.

These Levi Ackerman quotes are really something to live by, even if an anime fictional character had said them. You can use them as a rule on how you create a choice in your life.

Nothing could really prevent you from doing what you believe in.

Do you want more quotes from the characters such as Armin Arlert on Attack on Titan anime? Watch out for my upcoming posts.

There are a lot of characters in the Dragon Ball universe. Over time, Akira Toriyama has introduced new and more powerful characters to battle against END_OF_DOCUMENT_TOKEN_TO_BE_REPLACED

Tokyo Ghoul is a dark, gritty anime that tells the story of humans living in fear of Ghouls: beings that look human but survive by END_OF_DOCUMENT_TOKEN_TO_BE_REPLACED

What would you do if you could take out your enemies with a single punch? For most people, the answer is nothing, because they don't END_OF_DOCUMENT_TOKEN_TO_BE_REPLACED

Eye color in anime varies. You have blue, purple, gold, brown, black, and red. Typically, anime characters with red eyes are either demons, vampires, or END_OF_DOCUMENT_TOKEN_TO_BE_REPLACED

Fans are no strangers to anime characters with purple eyes. Though it's not a particularly common eye color, there are still quite a few anime END_OF_DOCUMENT_TOKEN_TO_BE_REPLACED

We all know that anime is full of beautiful characters. But sometimes, there are some ugly anime characters too. Today we're going to take a END_OF_DOCUMENT_TOKEN_TO_BE_REPLACED