In One Piece, there are many memorable quotes from the different characters. Whether they are funny, inspiring, or heartbreaking, these quotes stay with you long after you finish watching the show.

In this article, we will explore 35+ of the best One Piece quotes from our favorite characters! 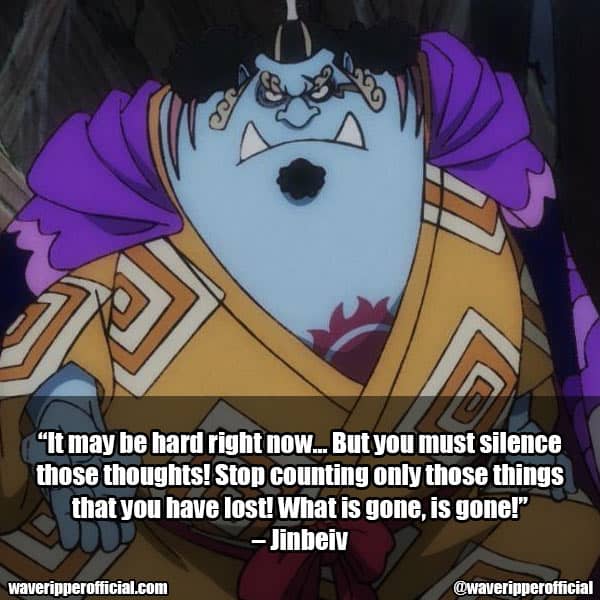 “It may be hard right now… But you must silence those thoughts! Stop counting only those things that you have lost! What is gone, is gone!” – Jinbei

“Maybe nothing in this world happens by accident. As everything happens for a reason, our destiny slowly takes form.” – Silvers Rayleigh

“If I can't even protect my captain's dream, then whatever ambition I have is nothing but talk! Luffy must be the man who becomes the Pirate King!” – Roronoa Zoro

“Being strong isn’t just about having power or move, it about one’s spirit.” – Roronoa Zoro

“You need to accept the fact that you’re not the best and have all the will to strive to be better than anyone you face.” – Roronoa Zoro

“I’m going to be the world’s greatest swordsman! All I have left is my destiny! My name may be infamous…but it’s gonna shake the world!!!” – Roronoa Zoro

“There is someone that I must meet again. And until that day…not even Death itself can take my life away!” – Roronoa Zoro

“If you do anything that would cause me to abandon my ambitions… You will end your own life on my sword!” – Roronoa Zoro

“Only those who have suffered long can see the light within the shadows.” – Roronoa Zoro

“When the world shoves you around, you just gotta stand up and shove back. It’s not like somebody’s gonna save you if you start babbling excuses.” – Roronoa Zoro

“Pirates are evil? The Marines are righteous?… Justice will prevail, you say? But of course, it will! Whoever wins this war becomes justice!” - Donquixote Doflamingo

“Those who stand at the top determine what’s wrong and what’s right! This very place is neutral ground! Justice will prevail, you say? But of course, it will! Whoever wins this war becomes justice!” - Donquixote Doflamingo

“What do you know of death? Have you ever died? You think death will preserve your cause forever?Ridiculous! Death leaves nothing behind! Once a person passes on, nothing remains but dead bones. If there is one thing I can’t stand, it is a person with no respect for life.” – Brook

“It’s not about possible or impossible. I’m doing it because I want to, I decided to become the Pirate King, and if I die fighting for it, then that’s that!” – Monkey D. Luffy

“No matter how hard or impossible it is, never lose sight of your goal.” – Monkey D Luffy

“Dying is not repaying a debt! That is not what he saved you for. Only weak men would die after someone spared their lives!” – Monkey D Luffy

“If you hurt somebody… or if somebody hurts you, the same red blood will be shed.” – Monkey D Luffy

“I love heroes, but I don’t want to be one. Do you even know what a hero is!? For example, you have some meat. Pirates will feast on the meat, but the hero will distribute it among the people! I want to eat the meat!” – Monkey D Luffy

“Being alone is more painful than getting hurt.” – Monkey D Luffy

“I don’t care now. I wanted to look like a human because I wanted friends. Now I want to be a monster who’s helpful to Luffy!” – Tony Tony Chopper

“Compared to the “righteous” greed of the rulers, the criminals of the world seem much more honorable. When scum rules the world, only more scum is born.” – Eustass Kid

“Don’t ever think there’s any perfect society made by humans! If you think that way, you’ll overlook the enemy!! Don’t be fooled by appearances!” – Smoker

“It’s not some sort of special power. He has the ability to make allies of everyone he meets. And that is the most fearsome ability on the high seas.” – Dracule Mihawk (Hawk-Eyes)

“Sometimes the only thing you have to doubt is your own common sense.” – Nico Robin

“Fools who don’t respect the past are likely to repeat it.” – Nico Robin

“Destiny. Fate. Dreams. These unstoppable ideas are held deep in the heart of man. As long as there are people who seek freedom in this life, these things shall not vanish from the Earth.” – Gold D. Rodger

“I don’t wanna live a thousand years. If I just live through today, that’ll be enough.” - Portgas D. Ace

“Old man, everyone!! And you... Luffy. Even though I've been good for nothing my whole life, even though I have the blood of a demon with me... You guys still loved me! Thank you so much!!” - Portgas D. Ace

“If you lose credibility by just admitting fault, then you didn’t have any in the first place.” – Fujitora

“Life is like a pencil that will surely run out, but will leave the beautiful writing of life.” – Nami

“Believe me… This town smells worse than Gray Terminal. It smells like rotten people! If I stay here… I’ll never be free! I’m… ashamed to be born a noble!” – Sabo

“You can’t see the whole picture until you look at it from the outside.” – Trafalgar Law

“Don’t try to find a reason for somebody’s love.” – Sengoku The Buddha

If you’re an anime fan, chances are you know about the popular series Vampire Knight. It follows a young girl named Yuuki as she navigates END_OF_DOCUMENT_TOKEN_TO_BE_REPLACED

Tokyo Revengers is an anime series that is full of quotable moments. Each episode leaves you thinking about life in a different way. Here are END_OF_DOCUMENT_TOKEN_TO_BE_REPLACED

Are you an anime fan looking for inspiring words? You've come to the right place! Classroom of the Elite is a unique manga that provides END_OF_DOCUMENT_TOKEN_TO_BE_REPLACED

Anime fans around the world know about Chainsaw Man. The series has a huge following, and for good reason! The anime is packed with action, END_OF_DOCUMENT_TOKEN_TO_BE_REPLACED

If you are a Black Butler fan, then you know that the anime is full of memorable quotes. In this blog post, we will share END_OF_DOCUMENT_TOKEN_TO_BE_REPLACED

If you're a fan of Goblin Slayer, then you know that the show can be pretty dark and violent. But it's also full of inspiring END_OF_DOCUMENT_TOKEN_TO_BE_REPLACED