Tokyo Ghoul is a very dark anime and horrifying seinen series that shows us the tragic story of Ken Kaneki. This gore-filled masterwork portrays a world which is filled with man-eating monsters known as ghouls.

The best thing about Tokyo Ghoul is its amazing cast of exceptionally realistic natures.

Every Tokyo Ghoul anime fan finds these characters very relatable and interesting. With that being said, here are some quotes from Tokyo Ghoul that represent the individual personalities of all of these well-written characters. 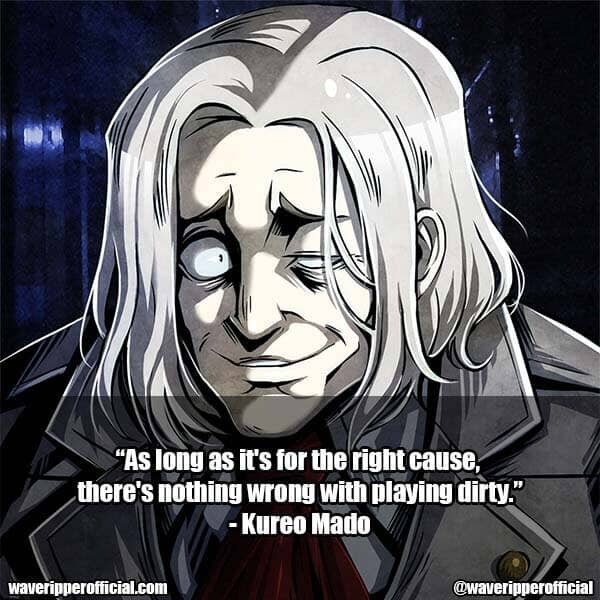 "As long as it's for the right cause, there's nothing wrong with playing dirty." - Kureo Mado

"You only need a strong will and a clear purpose to succeed." - Kureo Mado

"When you're in front of the enemy, even if your hands are trembling: Fight." - Kureo Mado

"Whose fault is it that things ended up like this? Coincidence? An accident? Fate? There's no such thing as fate. It's simply a combination of one circumstance and the next. And who is it that creates those circumstances? Who is it? It's you." - Rize Kamishiro

"There are times when you have to give up on one thing to preserve the other." - Rize Kamishiro

"All of the disadvantages in this world stems from a person's lack of ability." - Rize Kamishiro

"Books are nice, aren't they? With just one sentence you can get lost in all sorts of dreams. The way I think of it, literature allows the reader's consciousness to deeply relish the author and be closer to him. And so, we freely walk around the world of the story from the yarn spinner's point of view." - Shuu Tsukiyama

"Isn't it arrogant to put a price on whether life is "higher" or "lower", Kaneki? We are just bags of meat." - Shuu Tsukiyama

"You don't need to blame yourself just because you've hurt someone, just like when you're walking you can't really blame yourself to crush some ants... that's what being stronger ones means." - Shuu Tsukiyama

"I'm not going to protect you by being your shield or armor, but I'II be the dagger hidden below your pillow." - Shuu Tsukiyama

"Donato has to keep proving himself. He wants to prove just how valuable he is. Isn't that the case with you as well? Because you are the same as Donato." - Kaneki Ken

"I led me by the hand, as it to fill the niches in the memories in my oozing brain fluid. Without even a destination, we keep walking. Disgusting clouds were floating in the sky. I already know what will happen to me the next time I wake up." - Kaneki Ken

"I was wrong. I wasn't eating ghouls. I'm the one who was being eaten." - Kaneki Ken

"Why is it that the beautiful things are entwined more deeply with death than with life?" - Kaneki Ken

"All the liabilities in this world are due to the inadequacies of the person involved." - Kaneki Ken

"You think something like that would hurt, after all I've been through?" - Kaneki Ken

"It's better to be hurt than to hurt others. Nice people can be happy with just that." - Kaneki Ken

"The pain you have today will be the strength you'll have tomorrow." - Kaneki Ken

"It's not the world that's messed up; It's those of us in it. Yes some ghouls walk a path that leaves sorrow in their wake, but just like human, we can choose a different path altogether. We need to stop fighting, and start talking. Because when it comes to the state of the world, you can't point your finger at ghouls or humans. We're all to blame." - Kaneki Ken

"There's no way someone who can't even protect himself can protect anyone else, is there?" - Touka Kirishima

"I'm bad at sorting out my feelings, and although I try to put on a good front I'm just so incredibly immature. And I hate that about myself." - Touka Kirishima

"Doing what one likes is the right of the powerful." - Yakumo Oomori

"All suffering in the world is born from an individual's incompetence." - Yakumo Oomori

"Why should I apologize for being a monster? Has anyone ever apologized for turning me into one?" - Juuzou Suzuya

"If an angelic being fell from the sky and tried to live in this world of ours, I think even they would commit many wrongs." - Juuzou Suzuya

"Whether we die or not, isn't really that big deal." - Juuzou Suzuya

This was my list of the best Tokyo Ghoul quotes that are must-reads for every fan of the series. All of these quotes give us a glimpse of the hardships that these superstars have to face every single day.

In these anime quotes, we can see how all the different character from the series give us their own unique outlook on life. We should try to understand these meaningful words from our favorite idols and try to learn something from them.

35 Of The Most Dark Anime Series That Will Amaze You

50+ Of The Most memorable One Piece Quotes Of All Time

Tokyo Ghoul is a dark, gritty anime that tells the story of humans living in fear of Ghouls: beings that look human but survive by END_OF_DOCUMENT_TOKEN_TO_BE_REPLACED

What would you do if you could take out your enemies with a single punch? For most people, the answer is nothing, because they don't END_OF_DOCUMENT_TOKEN_TO_BE_REPLACED

Eye color in anime varies. You have blue, purple, gold, brown, black, and red. Typically, anime characters with red eyes are either demons, vampires, or END_OF_DOCUMENT_TOKEN_TO_BE_REPLACED

Fans are no strangers to anime characters with purple eyes. Though it's not a particularly common eye color, there are still quite a few anime END_OF_DOCUMENT_TOKEN_TO_BE_REPLACED