28+ Inspirational Pokemon Quotes That Will Motivate You In Your Life

Pokemon also known as Pocket Monsters in Japan, is an extremely popular anime series that is loved by fans all over the world. The first season of this anime started airing all the way back in 1997, and the show is still going strong to this day.

The story of this anime is quite exciting as it focuses on Ash Ketchum and his exciting adventures.

This media franchise has hundreds of episodes that teach us a lot of life-changing lessons. The characters in this anime have very colorful personalities, and their personalities develop as the show progresses.

Today, we are going to take a closer look at a list of the most Inspirational Pokemon Quotes! 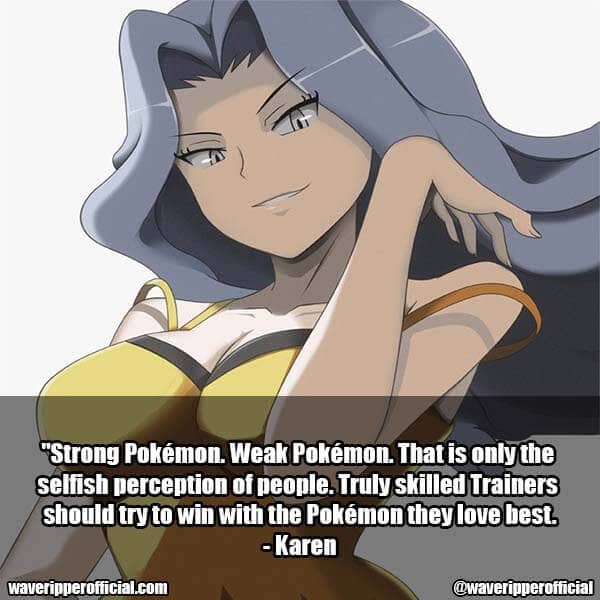 "Strong Pokémon. Weak Pokémon. That is only the selfish perception of people. Truly skilled Trainers should try to win with the Pokémon they love best. - Karen

"Everybody makes a wrong turn once in a while." - Ash Ketchum

"Do you always need a reason to help somebody? I don't." - Ash Ketchum

"There's no sense in going out of your way to get somebody to like you." - Ash Ketchum

"You see, sometimes friends have to go away, but a part of them stays behind with you" - Ash Ketchum

"A good friend left me...and I miss her every day. But I know we'II always be friends. Forever." - Ash Ketchum

"Pikachu and I are like glue! We will never be separated." - Ash Ketchum

"A caterpie may change into a Butterfree, but the heart that beats inside remains the same." - Brock

"There exists bad ways to win and good ways to lose. Small things like this keep me going." - Grimsley

"The most important thing is how you live your life. Are you happy or sad with your accomplishments?" - Grovyle

"I will stop humanity from growing and make the world a better place for Pokemon." - Mewtwo

"I see now that the circumstances of one's birth are irrelevant...It is what you do with the gift of life that determines who you are." - Mewtwo

"You may control my body, but you will never control my will!" - Mewtwo

"You either die a hero or live long enough to see yourself become a vilain." - Mewtwo

"The human sacrificed himself to save the Pokemon...I pitted them against each other, but not until they set aside their differences." - Mewtwo

"Make your wonderful dream a reality, it will become your truth. If anyone can, It's you." - N, Pokemon Black/White

"Pokemon...Do you really deserve such a miracle? Most likely not." - N

"With every life and death comes new beginnings and ends..." - Nx

"Me and Ash have never gave up on our dream! If we can do it, so you can!" - Pikachu

"We've finally defeated the Alolan league! This is just another step for Ash to become a Pokemon master!" - Pikachu

"Turning into a Raichu is one of my biggest fears. I am happy the way I am at the moment." - Pikachu

"Don't you guys just love when your trainers give you more Pokemon food? The taste and the aroma just sticks in my head all the time!" - Pikachu

"Even if we don't understand each other, that's not a reason to reject each other. There are two sides to any argument. Is there one point of view that has all the answers? Give it some thought." - Alder

"You humans must take charge of your destiny!" - Rayquaza

"Upon summoning me, I will be able to grant you one wish. Whatever you may like." - Rayquaza

"Sometimes you don't need to catch them all. You already have all you need." - Serena

This was a list of the best inspirational Pokémon Quotes. All of these quotes from this franchise represent the personalities of the characters that are all struggling due to the hardships in their own lives.

You can become a better person if you try to understand the real meaning behind these beautiful quotes.

35+ Most Meaningful Sailor Moon Quotes That are Absolute Must Read

Tokyo Ghoul is a dark, gritty anime that tells the story of humans living in fear of Ghouls: beings that look human but survive by END_OF_DOCUMENT_TOKEN_TO_BE_REPLACED

What would you do if you could take out your enemies with a single punch? For most people, the answer is nothing, because they don't END_OF_DOCUMENT_TOKEN_TO_BE_REPLACED

Eye color in anime varies. You have blue, purple, gold, brown, black, and red. Typically, anime characters with red eyes are either demons, vampires, or END_OF_DOCUMENT_TOKEN_TO_BE_REPLACED

Fans are no strangers to anime characters with purple eyes. Though it's not a particularly common eye color, there are still quite a few anime END_OF_DOCUMENT_TOKEN_TO_BE_REPLACED

We all know that anime is full of beautiful characters. But sometimes, there are some ugly anime characters too. Today we're going to take a END_OF_DOCUMENT_TOKEN_TO_BE_REPLACED

Some people say that green eyes are the most beautiful eyes color both in real life and in anime series.If you're an anime fan, then END_OF_DOCUMENT_TOKEN_TO_BE_REPLACED