Death Note is one of the most controversial anime shows. It's psychological in nature and has a depth that you can't find in most anime adaptations. The most interesting part is the life lessons and quotes you can derive just by watching the show.

I gathered the most thought-provoking quotes from famous characters in the anime. Included here in the list is Yagami Light's famous words, Ryuk's blunt phrases and L's inspiring messages. 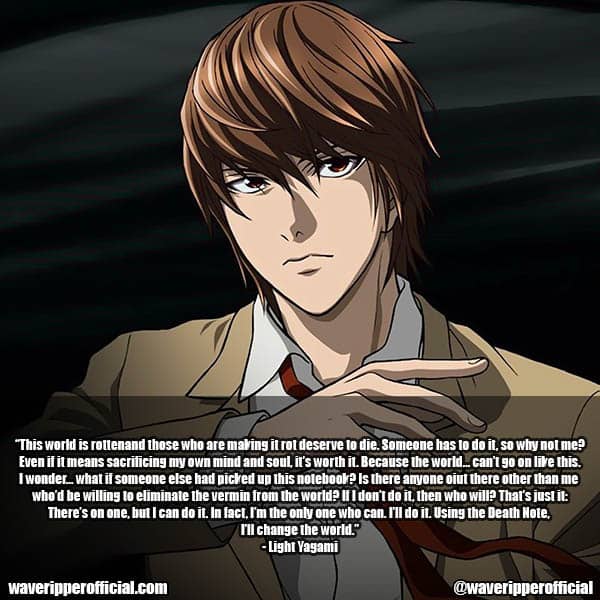 "This world is rotten and those who are making it rot deserve to die. Someone has to do it, so why not me? Even if it means sacrificing my own mind and soul, it's worth it. Because the world...can't go on like this. I wonder...what if someone else had picked up this notebook? Is there anyone out there other than me who'd be willing to eliminate the vermin from the world? If I don't do it, then who will? That's just it: there's no one, but I can do it. In fact, I'm the only one who can. I'II do it. Using the death note, I'II change the World." - Light Yagami

"In this world, there are very few people who actually trust each other." - Light Yagami

"Human aren't made perfectly. Everyone lies. Even so...I've been careful not to tell lies that hurt others." - Light Yagami

"Look around you, and all you will see are people the world would be better off without." - Light Yagami

"I can't develop feelings. That's how most idiots crew up." - Light Yagami

"For murderers, there is no good or evil. I know that." - Light Yagami

"The thing I hate the most is to trample on other people's good will." - Light Yagami

"You can't ever win if you're always on the defensive. To win, you have to attack!" - Light Yagami

"All Humans die the same, the place they go after death isn't decided upon by a god it is Mu (nothingness)." - Ryuk

"I Twist My Body Up Like A Pretzel And Do Handstands." - Ryuk

"I can understand, because you can buy apples with that money." - Ryuk

"If you can't beat the game, if you can't solve the puzzle, you're nothing but a loser." - Near

"What is right from wrong? What is good from evil? Nobody can truly distinguish between them. Even if there was god. Now, supposing a god and his world existed, even then I'd stop and think to myself. I'd decide for myself whether his teaching are right or wrong. After all, I am just the same as you. I put faith in my own convictions as to what I believe is right, and consider them to be righteous." - Near

"People in supervising positions in investigations are supposed to give too much of their opinion, and if they are wrong, all it would take is an apology." - Near

"It's not a sense of justice. Figuring out difficult cases is my hobby. If you measured good and evil deeds by current laws, I would be responsible for many crimes. The same way you all like to solve mysteries and riddles, or clear video games more quickly. For me too, it's simply prolonging something I enjoy doing. That's why I only take on cases that pique my interest. It's not justice at all. And if it means being able to clear a case, I don't play fair, I'm a dishonest, cheating human being who hates losing." - L Lawliet

"There is no heaven or hell. No matter what you do while you're alive, everybody goes the same place once you die. Death is Equal." - L Lawliet

"If you use your head, you won't get fat even if you eat sweets." - L Lawliet

"Learn to treasure your life because unfortunately, it can be taken away from you anytime." - L Lawliet

"By trying too hard we put ourselves at a greater risk." - L Lawliet

"Whatever the reason may be, murder is always wrong." - L Lawliet

Mello Quotes From One Piece

"No matter what I have to do, I will get it before Near." - Mello

"In the end, there is no greater motivation than revenge." - Mello

"In this world, there is only good and evil, that was the first universal truth I grasped from observing the world around me when I was a child. Every human being without exception ends up falling into one category or the other." - Mikami Teru

"The real evil is the power to kill people. Someone who finds himself with that power is cursed. No matter how you use it, anything obtained by killing people can never bring true happiness." - Soichiro Yagami

"Light, my son...from one murdere to another, I'II see you in hell." - Soichiro Yagami

"Unless someone makes the first move, nothing will happen." - Misa Amane

"To Defeat Evil There Must Be Sacrifices." - Misa Amane

50+ Of The Most Memorable One Piece Quotes Of All Time

Tokyo Ghoul is a dark, gritty anime that tells the story of humans living in fear of Ghouls: beings that look human but survive by END_OF_DOCUMENT_TOKEN_TO_BE_REPLACED

What would you do if you could take out your enemies with a single punch? For most people, the answer is nothing, because they don't END_OF_DOCUMENT_TOKEN_TO_BE_REPLACED

Eye color in anime varies. You have blue, purple, gold, brown, black, and red. Typically, anime characters with red eyes are either demons, vampires, or END_OF_DOCUMENT_TOKEN_TO_BE_REPLACED

Fans are no strangers to anime characters with purple eyes. Though it's not a particularly common eye color, there are still quite a few anime END_OF_DOCUMENT_TOKEN_TO_BE_REPLACED