Hello everyone, in this article I have put a collection of the best Nami quotes from One Piece.

I had fun by creating awesome pictures of this beautiful anime girl. Let me know about your favorites quotes from Nami and I will add them to this article. 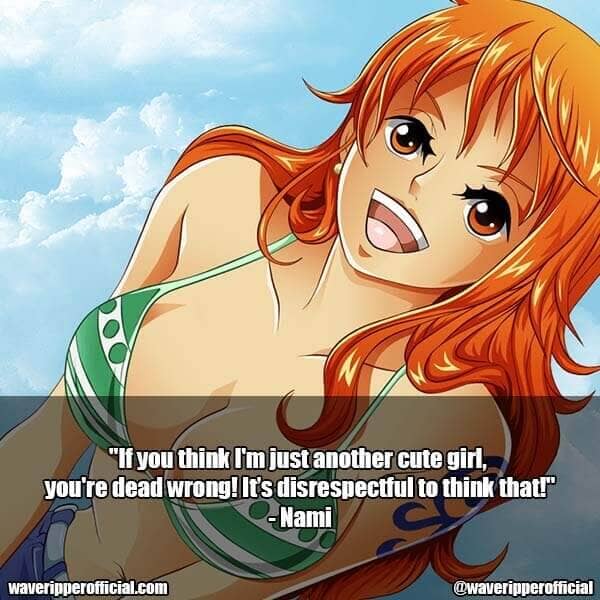 "If you think I'm just another cute girl, you're dead wrong! It's disrespectful to think that!" - Nami

"It's sunny today, have some fun and meet new people outside!" - Nami

"Life is like a pencil that will surely run out, but will leave the beautiful writing of life." - Nami

"Hopes for the future...? Yes. However, getting there with you... is not much different than being alone...!" - Nami

"What good is the treasure if I'm alone? After sharing so much of our dreams. Instead of sacrificing them and leaving with you I would rather... HAVE NOTHING AT ALL" - Nami

"Everyone's weak when they hesitate. Try your best not to do so!" - Nami

"Everyone is expecting help from you, but you come here and don't think about doing anything to help those people" - Nami

"I'd serve to earn the treasure to save my village! But that's over now! I'II get my freedom to defeat you!" - Nami

"Don't touch Bellemere-san's orange with your dirty hands! I will never give that money to anyone!"- Nami

50+ Of The Most Memorable One Piece Quotes Of All Time

Tokyo Ghoul is a dark, gritty anime that tells the story of humans living in fear of Ghouls: beings that look human but survive by END_OF_DOCUMENT_TOKEN_TO_BE_REPLACED

What would you do if you could take out your enemies with a single punch? For most people, the answer is nothing, because they don't END_OF_DOCUMENT_TOKEN_TO_BE_REPLACED

Eye color in anime varies. You have blue, purple, gold, brown, black, and red. Typically, anime characters with red eyes are either demons, vampires, or END_OF_DOCUMENT_TOKEN_TO_BE_REPLACED

Fans are no strangers to anime characters with purple eyes. Though it's not a particularly common eye color, there are still quite a few anime END_OF_DOCUMENT_TOKEN_TO_BE_REPLACED

We all know that anime is full of beautiful characters. But sometimes, there are some ugly anime characters too. Today we're going to take a END_OF_DOCUMENT_TOKEN_TO_BE_REPLACED

Some people say that green eyes are the most beautiful eyes color both in real life and in anime series.If you're an anime fan, then END_OF_DOCUMENT_TOKEN_TO_BE_REPLACED