25+ Jiraiya Quotes That You Don’t Want To Miss

WaveRipperOfficial  is an affiliate partner.

Jiraiya is one of the most interesting characters created by by Masashi Kishimoto.

He is one of those characters that you simply don't want to miss out on meeting when you watch Japanese manga. So far, he has made an appearance in two Naruto movies.

You will also find him featured in many of the games which are now a popular spin-offs from Naruto series.

To be honest, Jiraiya is not everyone's cup of tea as they like to say in England. Some would call him a bit of a dirty old man. One thing is for sure, he has come out with some of the most interesting and memorable quotes in Naruto.

Of course, Naruto is already famous for its quotes, but you can say that Jiraiya takes it to another level. You need to be ready to be both surprised and shocked when this man opens his mouth.

The first time we meet Jiraiya is back in 2001. He appears in the Naruto movie Whaddabout My Training?!.

After that, you will also catch him in Naruto's Toughest Training Yet! On top of that, he makes an experience in the Naruto series Naruto episode 52: Ebisu.

Love him or loathe him, he is one of those anime characters that stands out in a crowd. Most of the time he wears his hair in a pony tail, but he also has other styles.

Out of all the characters created by Masashi Kishimoto, he is perhaps one of the more complexed ones.

Let's have a look at some of his best quotes:

The Best Ever Jiraiya Quotes 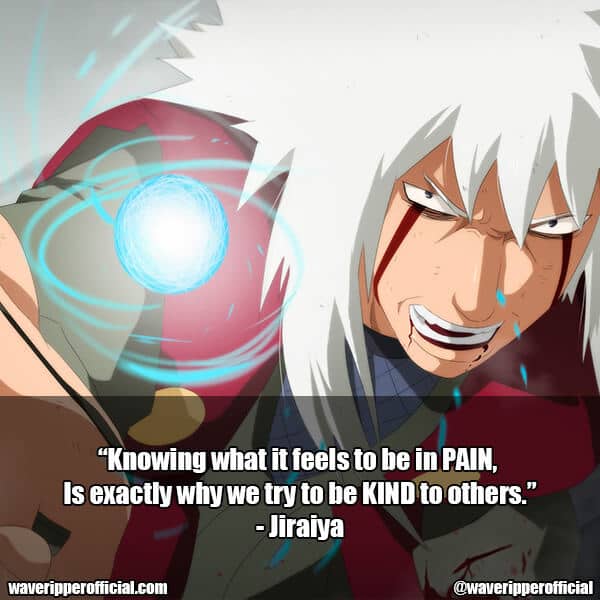 "Knowing what it feels to be in PAIN, Is exactly why we try to be KIND to others." - Jiraiya

"The true measure of a shinobi is not how he lives but how he dies. It's not what they do in life but what they did before dying that proves their worth." - Jiraiya

"I believe that the day will come when people can truly understand each other." - Jiraiya

"One person is all everyone needs" - Jiraiya

"Rejection is a part of any man's life. If you can't accept and move past rejection or at least use it as writing material you're not a real man." - Jiraiya

"Whenever someone is still thinking of you, that place is your home." - Jiraiya

"When you feel your time has come, then I shall rewind time. When you feel alone, I'll be there to wipe away the fears, you can't see me, but I am there."

"Never go back on your word... and never give up. That's your ninja way... and as your mentor... I have no business whining! Because the student's ninja way should be the master's too! Isn't that so, Naruto?! - Jiraiya

"A person grows up when he's able to overcome hardships. Protection is important, but there are some things that a person must learn on his own." - Jiraiya

"I think we all have to acknowledge you. Gamatatsu, Gamakichi, Sakura, Tsunade... and I... We all admit you've worked really hard. But I wonder what's pushing you forward." - Jiraiya

"I am, Jiraiya, the epitome of manliness! I shall fall for no woman's wiles! When you're me, you only need to flash that hotness to have women fall at your feet." - Jiraiya

"Even I can tell that hatred is spreading. I wanted to do something about it... but I don't know what." - Jiraiya

"The true measure of a shinobi is not how he lives, but how he dies." - Jiraiya

"The tale of Jiraiya the Gallant. Now it'II end a bit better, I hope. The final chapter... I'II call it: Frog at the bottom of the well drifts of into the great ocean. Just barely glorious..." - Jiraiya

"Learning from failure is a positive way to get a grasp of the harsh realities of life." - Jiraiya

"The route of self-discovery and becoming is a long one. Every shinobi is on a quest for self-improvement, and through perseverance, victory become the goal."

"Hatred is a strong emotion that can harness the worst inside a person, pushing them to commit heinous acts."

"My job right now is to help the next generation become a better future for everyone." - Jiraiya

"The day will come when people truly understands one another." - Jiraiya

"Knowing how it feels to be in pain is exactly why we are kind to each other." - Jiraiya

Tokyo Ghoul is a dark, gritty anime that tells the story of humans living in fear of Ghouls: beings that look human but survive by END_OF_DOCUMENT_TOKEN_TO_BE_REPLACED

What would you do if you could take out your enemies with a single punch? For most people, the answer is nothing, because they don't END_OF_DOCUMENT_TOKEN_TO_BE_REPLACED

Eye color in anime varies. You have blue, purple, gold, brown, black, and red. Typically, anime characters with red eyes are either demons, vampires, or END_OF_DOCUMENT_TOKEN_TO_BE_REPLACED

Fans are no strangers to anime characters with purple eyes. Though it's not a particularly common eye color, there are still quite a few anime END_OF_DOCUMENT_TOKEN_TO_BE_REPLACED

We all know that anime is full of beautiful characters. But sometimes, there are some ugly anime characters too. Today we're going to take a END_OF_DOCUMENT_TOKEN_TO_BE_REPLACED

Some people say that green eyes are the most beautiful eyes color both in real life and in anime series.If you're an anime fan, then END_OF_DOCUMENT_TOKEN_TO_BE_REPLACED