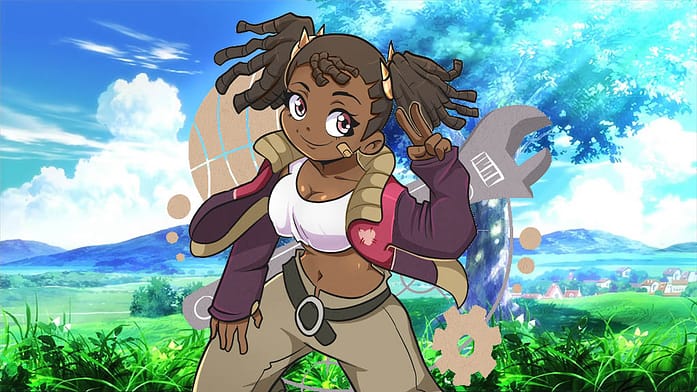 Miyuki Ayukawa is beautiful and has brains and an engineer. This black girl grew up secretly admiring Dan, her childhood friend. She's one of those anime characters with personality.

Her best features are her eyes. Oh boy! That striking contrast of color violet against dark skin is mesmerizing. Miyuki looks so beautiful and well-endowed, too!

This dark-skinned female character in the anime does her job well in repairing those Big Foot robots for the pilots. Although Miyuki isn’t a pilot, she’s an invaluable part of the team.

The most despicable anime characters are those who use the weak to achieve their goals. Sister Krone is exactly like that.

She pretends to be affectionate and warm so that she can manipulate other people.

Appearance-wise, Krone is muscular and has an intimidating personality. She tried to take over the orphanage by plotting the demise of Isabella. However, Sister Krone ends up dying.

Atsuko Jackson is a police officer and one of the pretty black anime characters who know how to rock Afro hair. She grew up with Michiko Milandro in the orphanage.

The relationship of these anime characters is somewhat complicated. For some reason, she couldn't muster the courage to arrest her.

Also, Atsuko explodes like a bomb when Michiko calls her Jambo.

Michiko Malandro has a wild streak and a temper to match. Tall, sexy, and beautiful, she likes to flaunt her body. Michiko even uses “her assets” to get by with the harsh life in the slums of Brazil.

Despite her temper and abrasive nature, the main character has a kind and gentle nature.

Although she likes to show her stubbornness, she gives off this vibe that she’s being rough to pretend and hide who she really is on the inside.

Mira Naigus is the partner of Sid Barrett in the Soul Eater anime series. She is a teacher and a very passionate one. Mira has blue eyes, beautiful dreadlocks, and a body to die for.

Despite her sweet smile and passionate nature to her students, she has a cynical and cold nature.

Due to her high rank, Mira has to be skillful and become a great leader.

Casca is a strong woman who can lead mercenaries and wield a sword like a man. She is a cold-hearted woman but she’s a great leader.

Seldom did her comrades question her judgment and strategy.

However, beneath that armor-clad body is a person who wants to be accepted as a warrior and a woman. Casca sports pixie hair. She has a sweet almost angelic face, marred by sulking brows.

This cute little girl is sporting a short bob with long locks in front containing some sort of a trinket.

Her best features are her deep magenta eyes. Looking at those eyes reminds me of jewels sparkling under the moonlight.

She has a polite personality and always tries to repay indebtedness. She’s kind but sometimes withdrawn when suspicious of a person.

Coffee is a bounty hunter and great at what she does. She’s tall with a slender and toned body. Coffee has an afro-hair and typical brown eyes.

The grenade launcher is her favorite weapon when bounty hunting. Despite her dangerous job, Coffee maintains her elegance and grace as a woman.

She's one of the many anime characters who can rock Afro hair.

Yoruichi is born into a noble family and can turn into a cat form. She is the princess of the Shihoin clan.

Despite her nobility, she doesn’t act snob and would like others to call her by her name. She's one of those black girl anime characters who have a holistic personality.

Yoruichi can shift into a cat and sometimes turns back to a human in front of Ichigo to tease him. She has a care-free attitude but witty and formidable when facing enemies.

Canary, one of the famous HunterxHunter female characters is a beautiful teenager with thick hair tied in bunches at the tip. She has grey eyes, a round face, and a pert nose.

She may be a teenager, but she’s a ruthless bodyguard. Canary will do everything to protect the people she cares for. However, she’s willing to bend some rules if necessary.

Ymir is a Jaw Titan that is considered one of the most intelligent Titans. Her pure Titan form is the smallest as compared to other Titans.

In human form, she has brown hair tied in a ponytail and golden eyes.

Before she joined the Scout regiment, she was regarded as a goddess. Ymir is a kind person but because of betrayal, she decided to live for herself.

The only person she cares about is Christa/Historia.

Heles is extremely beautiful by her universe’s standards. She looks like the combination of Cleopatra and Nefertiti, sporting Egyptian style clothes and fashion.

Despite her role as Goddess of Destruction, Heles scorns the ruthless way the council of elders eliminates eight universes.

She’s rather kind compared to other gods.

Sam is an android and highly intelligent as a robot in the anime Cannon Busters. She has light blond, almost color white hair and blue eyes that could turn red.

Being a dark-skinned robot, Sam could transform into a weapon of destruction. She has a friendly and persistent personality.

Given the circumstances, Sam would give her life to Prince Kelby and to people that matter to her.

Karui is a competitive and outspoken person. Sometimes, her character is impulsive, allowing her emotions to override her practical thinking.

This black girl has long and red spiky hair. Her eyes are amber, more like a warm summer sunset.

She wears golden earrings and carries a long sword, always. I guess, she's an Afro Samurai.

April is an agent in the anime Darker than Black who is working closely with November 11 and July. She has light blue hair with melancholic golden yellow eyes.

Most of the time, April wears a knee-high pair of boots, coat with fur linings in the neck and arms.

Her vice is drinking alcohol. Not much is known of her history, but she’s a skilled agent.

Hilda is a pilot and is romantically involved with another pilot. However, there’s no concrete evidence if these anime characters were married.

The dark-skinned female pilot is calm and friendly, even acting as a mother figure to Eureka’s children. Aside from being a pilot, she is also the manager in a store for mechanical parts.

Mila Rose is an Arrancar in Bleach anime. She has big boobs, brown long wavy hair, and green eyes.

Mila is quite sadistic but still possesses a calm and rational demeanor. She cares deeply for her other comrades, although she doesn’t show this side of her character often.

These anime characters are first-class adventurers and go by the name Tione and Tiona. Tione has long hair and green eyes while Tiona has short hair and brown eyes.

These anime characters prefer revealing clothes and walk barefooted. Despite being twins, Tione and Tiona have entirely different personalities.

Hild is a Demon who possesses great power that is stronger than the powers of the three Goddesses combined. She is the mother of Urd.

Her hair is white and her eyes are violet. Hild is wearing gold bands on her wrists, fingers, ankles, and fingers. These bands suppress her powers.

Umiko Ahagon is a programmer who is a little strict with her employees. She loves airsoft and has various collections of the game.

Despite her mean demeanor, this anime character is kind and sweet. When this dark-skinned girl becomes comfortable with other people, she tends to talk a lot about her hobby.

These black women sure are and they strut their selves with great confidence and offer diversity.

Top 30 Cute Anime Girls You Have To Get To Know

Tokyo Ghoul is a dark, gritty anime that tells the story of humans living in fear of Ghouls: beings that look human but survive by END_OF_DOCUMENT_TOKEN_TO_BE_REPLACED

What would you do if you could take out your enemies with a single punch? For most people, the answer is nothing, because they don't END_OF_DOCUMENT_TOKEN_TO_BE_REPLACED

Eye color in anime varies. You have blue, purple, gold, brown, black, and red. Typically, anime characters with red eyes are either demons, vampires, or END_OF_DOCUMENT_TOKEN_TO_BE_REPLACED

Fans are no strangers to anime characters with purple eyes. Though it's not a particularly common eye color, there are still quite a few anime END_OF_DOCUMENT_TOKEN_TO_BE_REPLACED

We all know that anime is full of beautiful characters. But sometimes, there are some ugly anime characters too. Today we're going to take a END_OF_DOCUMENT_TOKEN_TO_BE_REPLACED

Some people say that green eyes are the most beautiful eyes color both in real life and in anime series.If you're an anime fan, then END_OF_DOCUMENT_TOKEN_TO_BE_REPLACED