34+ Attack on Titan Quotes Which Will Make Your Life Better

Attack on Titan is a popular anime series with an intense and emotional storyline.

It features plenty of dialogue, but it also has some of the best one-liners in any show to date.

If you're looking for a little inspiration or just want to have fun after a tough day, then these AOT quotes will do the trick! 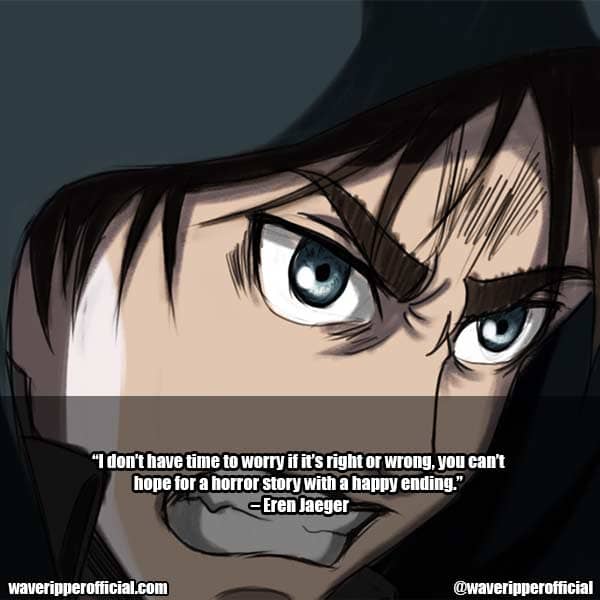 “I don’t have time to worry if it’s right or wrong, you can’t hope for a horror story with a happy ending.” – Eren Jaeger

“No matter how messed up things get, you can always figure out the best solution.” – Eren Jaeger

“I can do this. No, we can do this! Because we’ve all been special since the day we were born. We’re free!” – Eren Jaeger

“Nothing can suppress a human’s curiosity.” – Eren Jaeger

“Then, if you think reality is just living comfortably and following your own whims, can you seriously dare to call yourself a soldier?” – Eren Jaeger

“I want to see and understand the world outside because I don’t want to die inside these walls without knowing what’s out there.” – Eren Jaeger

“What is the point if those with the means and power do not fight?” – Eren Jaeger

“I’m sorry Eren, but I won’t give up. And, I’ll never give up again. So I’ll win, no matter what! I’ll survive no matter what.” – Mikasa Ackerman

“I don’t want to lose what little family I have left.” – Mikasa Ackerman

“There are only so many lives I can value. And I decided who those people were six years ago. So you shouldn’t try to ask for my pity. Because right now, I don’t have time to spare or room in my heart.” – Mikasa Ackerman

“Believe in your own power.” – Mikasa Ackerman

“You don’t stand a single chance to win unless you fight.” – Mikasa Ackerman

“Only victors are allowed to live. This world is merciless like that.” – Mikasa Ackerman

“That’s right… This world… is cruel. It hit me that living was like a miracle.” – Mikasa Ackerman

“To surpass monsters, you must be willing to abandon your humanity.” – Armin Arlert

“You’re only resorting to physical abuse because you can’t prove that I’m wrong.” – Armin Arlert

“We’re going to explore the outside world someday, right? Far beyond these walls, there’s flaming water land made of ice, and fields of sand spread wide. It’s the world my parents wanted to go to.” – Armin Arlert

“I’m leaving it all with Eren. My dream, my life, everything. Yes, I have nothing else left to lose because I’m sure Eren will be able to reach the ocean. He’ll have to see it for both of us.” – Armin Arlert

“Even if you have your reasons and there are things you can’t tell me, no matter what, I’m on your side.” – Historia Reiss

“Everyone had to be drunk on somethin’ to keep pushing on... I know, everyone was a slave to something.” - Kenny Ackerman

“The future of humanity will be doomed. Having said that, I’m not about to sit around while we all get slaughtered.” – Jean Kirstein

“Do you always want to live hiding behind the mask you put up for the sake of others? You’re you, and there’s nothing wrong with that.” – Ymir

“Living this way is my way of getting revenge. I’m going to be living proof that your fate isn’t decided at birth!” – Ymir

“If you begin to regret, you’ll dull your future decisions and let others make your choices for you. All that’s left for you then is to die. Nobody can foretell the outcome. Each decision you make holds meaning only by affecting your next decision.” – Erwin Smith

“It’s us who gives meaning to our comrades lives.” – Erwin Smith

“If we only focus on making the best moves, we will never get the better of our opponent. When necessary, we must be willing to take big risks, and be prepared to lose everything. Unless we change how we fight, we cannot win.” - Erwin Smith

“I don’t know which option you should choose. You know, I could never advise you on that… No matter what kind of wisdom dictates you the option you pick, no one will be able to tell if it’s right or wrong until you arrive to some sort of outcome from your choice.” – Levi Ackerman

“The only thing we’re allowed to do is believe that we won’t regret the choice we made.” – Levi Ackerman

“A lot of the time, you’re going into a situation you know nothing about. So what you need is to be quick to act… and make tough decisions in worst-case scenarios.” – Levi Ackerman

“It’s good to see that someone has the balls to go. But don’t forget to do your damnedest to stay alive.” – Levi Ackerman

“I think pain is the best discipline.” – Levi Ackerman

“Whether you have the body, dead is dead.” – Levi Ackerman

Related: 12 Levi Akerman Quotes - AOT To Inspire You In Your Life

“Ever since I joined the survey corps, I’ve had people dying on me everyday. But you understand, don’t you? One day or another, everyone you care about eventually dies. It’s something we simply can’t accept. It’s a realization that could drive you insane.” – Hange Zoe

“Even in moments of the deepest despair… I guess we can still find hope, huh?” – Hange Zoe

What are some Attack on Titan quotes?

The best Attack on Titan message is that real freedom is not equivalent to a single death and not all are born free.

In the series, you see humanity's struggle and fight in gaining freedom by sacrificing their own lives to man-eating Titans.

Thus, many abandon things important to them and stop living peacefully to fight for this freedom.

Why will Eren die in 13 years?

Most people who consume one of the special Titans can live up to 13 years because of the curse of Ymir. Most probably, Eren's life isn't an exception, which many fans fear.

Who does Eren really love?

As you can see, Eren has so much respect for Mikasa and their relationship goes much deeper. So, Eren must have loved Mikasa after all those years and struggles.

Is there any kissing in Attack on Titan?

None really but in the manga, you can see Mikasa kissing Eren.

In conclusion, many anime fans have conflicting opinions about the ending. Still, this is a great anime. Feel free to leave comments below.

If you're a fan of Goblin Slayer, then you know that the show can be pretty dark and violent. But it's also full of inspiring END_OF_DOCUMENT_TOKEN_TO_BE_REPLACED

In One Piece, there are many memorable quotes from the different characters. Whether they are funny, inspiring, or heartbreaking, these quotes stay with you long END_OF_DOCUMENT_TOKEN_TO_BE_REPLACED

Kakashi Hatake is one of the most popular characters in the Naruto series. He is known for being a skilled ninja, as well as his END_OF_DOCUMENT_TOKEN_TO_BE_REPLACED

Might Guy is one of the most entertaining characters in "Naruto Shippuden". He's always cracking jokes, and he's never afraid to speak his mind.In fact, END_OF_DOCUMENT_TOKEN_TO_BE_REPLACED

In the anime series Naruto, there is one character who always stands out to me and that is Gaara. He is a complex character with END_OF_DOCUMENT_TOKEN_TO_BE_REPLACED

Fruits Basket is a Japanese manga series originally serialized in a magazine called Hana to Yume from 1998 to 2006. It follows the Sohma family END_OF_DOCUMENT_TOKEN_TO_BE_REPLACED