Bleach is one of the most popular anime series in history. It has a huge following and for good reason: it's awesome!

In this article, I will present to you what I believe are the greatest epic quotes from Bleach of all time. These quotes have shaped my life and influenced me on a personal level. 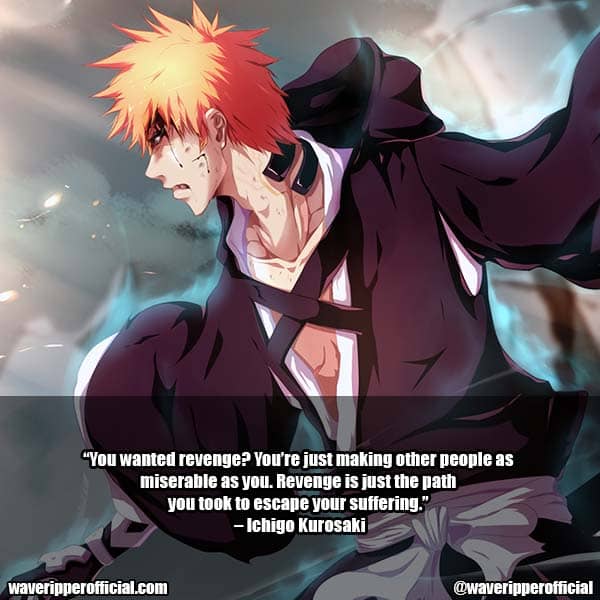 “You wanted revenge? You’re just making other people as miserable as you. Revenge is just the path you took to escape your suffering.” – Ichigo Kurosaki

“You know why big brothers are born first? To protect the little ones that come after them.” – Ichigo Kurosaki

“The difference in ability... What about it? Do you think I should give up just because you’re stronger than me?” – Ichigo Kurosaki

“Don’t break anyone’s heart, they only have one. Break their bones, they have 206.” – Ichigo Kurosaki

“Whatever she is, it doesn’t change the fact that she’s here now. She still experiences anger, happiness, and pain.” – Ichigo Kurosaki

“Because he attained so much power, he could only be controlled by it. And in the end, maybe his only option was to destroy himself.” – Ichigo Kurosaki

“We can’t waste time worrying about the what if’s.” – Ichigo Kurosaki

“I’m not Superman, so I can’t say anything big like “I’ll protect everyone on Earth!”. I’m not a modest guy who will say “It’s enough if I can protect as many people as my two hands can handle.” either. I want to protect… a mountain-load of people.” – Ichigo Kurosaki

“You nuts?! What kind of sick twisted freak attacks his own son while he’s laying in bed, sleeping?!” – Ichigo Kurosaki

“Abandon your fear. Look forward. Move forward and never stop. You'll age if you pull back. You'll die if you hesitate.” - Zangetsu

“Do not live bowing down. You must die standing up.” – Genryusai Yamamoto

“Friends are a good thing, even if they tread a different path.” – Jushiro Ukitake

“I’m so disappointed, Ichigo, so very disappointed. Sadly, your sword exhibits only fear. When you counter, it’s because you fear being killed. When you attack, you fear killing. And when you protect someone, you fear you could let them die. At this point, the only thing your sword speaks is senseless fright, and that’s not good. What you don’t need in battle is fear. Nothing will come of it.” – Kisuke Uruhara

“Let me tell you the truth. The truth behind fighting. Fighting continues forever. After you’ve defeated one person, someone stronger appears. If you manage to defeat him, then an even stronger person comes along. If you don’t have the resolve to endure that eternal struggle, then eventually your confidence will erode. But it doesn’t end there! The battle will continue elsewhere, fought by others. It’s an endless cycle! And it doesn’t end with a person’s death. The cycle will continue! As long as people and their souls exist, there will be disputes and those disputes will lead to fights. And those fights will continue without limit, for all eternity.” – Jin Kariya

“We are all like fireworks. We climb, shine, and always go our separate ways and become further apart. But even if that time comes, let’s not disappear like a firework. Let’s continue to shine… Forever.” – Toshiro Hitsugaya

“Admiration is the furthest thing from understanding.” – Sosuke Aizen

“I guess it’s only natural for inferior beings to ride on the coattails of their superior counterparts. If they wish to keep their lives, they have no choice but to obediently comply. It’s a never-ending chain… as the ones who are burdened with that trust, in order to escape that burden, seek to find someone even greater than themselves. These greater beings then seek others even greater than themselves to shelter them. This is how Gods are born. But make no mistake. They all still abide by me. Because from this point onward, you will witness first hand, the power of the God they foolishly placed their faith in. I will become that God they have no choice but to believe in.” – Sosuke Aizen

“A victor must speak not of the current state of the world, but of how it should rightfully be.” – Sosuke Aizen

“There is no such thing as “truth” or “lies” in this world; there never has been. There are only plain, hard facts. And yet, all beings who exist in this world acknowledge only those “facts” that are convenient to them, and take them to be the “truth”. They do so because they know no other way of living. However, for those powerless beings who comprise the majority of this world’s population, inconvenient facts that affirm their very existence, are their only truth.” – Sosuke Aizen

“When people constantly show their affection for you, you start taking it for granted. If you don’t realize how much they care for you until they’re gone, you’ll only be left with regret and remorse.” – Orihime Inoue

“It’s impossible to feel exactly the same as someone else… but when you both care for each other, your hearts are able to draw a little closer together. I think that’s what it means to make your hearts as one.” – Orihime Inoue

“Things like protecting the world are no more than moral reasons that sound good.” – Soi Fon

“Do you remember the first time you walked? No. So you weren't conscious of it. Then why did you walk? Everyone was born knowing how to walk. It's called instinct. That's what this boy reminds me of. He knows he can achieve bankai, so he continues.” - Yoruichi Shihoin

“Think about it this way: a person picks up a sword when he's trying to protect something. Perhaps it's your life or your social status, maybe a reputation, a loved one, or personal beliefs. The motives may be completely different, but in the end, it's the same desire to protect something.” - Yoruichi Shihoin

“No matter how strong a defense, a stronger offense will always shatter it.” – Byakuya Kuchiki

“I don’t remember saying that I would kill you because I’m a Soul Reaper. The reason I am killing you is simple. It’s because you aimed your blade at my only pride.” – Byakuya Kuchiki

“The right to choose life or death lies with the victor. And the victor of this battle is me.” – Uryu Ishida

“My past does not define me.”– Uryu Ishida

“I want to get stronger. I'll become a very strong Quincy and then protect everyone from Hollows. Then father will definitely agree with the way of the Quincy.” – Uryu Ishida

“There is no such thing as perfect in this world. That may sound cliche, but it’s the truth. The average person admires perfection and seeks to obtain it. But what’s the point of achieving perfection? There is none. Nothing. Not a single thing. I spit on perfection! If something is perfect, then there is nothing left. There is no room for imagination. No place left for that person to gain additional knowledge or abilities. Do you know what that means? For scientists such as us, perfection only brings despair. It is our job to create things more wonderful than anything before them, but never to obtain perfection.” – Kurotsuchi Mayuri

“No man’s life is worth more than another! If you’re gonna put your life on the line, you do it as equals! I don’t care if you’re brothers, or master and apprentice, or whatever! You should only die for a guy who’d die for you! There’s nothing honorable about throwing your life away as though it’s nothing! That’s just showing off like a kid.” – Madarame Ikkaku

“We are taught never to shed tears. For to shed tears means that the body has been defeated by emotion. And to us, this simple act of crying proves, without question, that the existence of emotion is nothing but a burden.” – Rukia Kuchiki

“People are able to hold onto hope, since death is that which cannot be seen.” – Rukia Kuchiki

“Even if no one believes in you, stick out your best and scream your defiance!” – Rukia Kuchiki

“That’s just the way it is. Change is inevitable. Instead of resisting it, you’re better served simply going with the flow.” – Shunsui Kyouraku

“Only underlings get caught up in the matter of style and lose the battle. A captain can’t afford such indulgences. Don’t try to be a good kid. Whether you own somebody or they own you. The moment you start a fight, you are wrong in either way.” – Shunsui Kyoraku

“Worrying about a warrior’s life on the battlefield is only an insult.” – Renji Abarai

“Ichigo…I know this is shameful, but I’m begging you — Rukia… Please save Rukia!!” – Renji Abarai

“Emotions? Nope, I’ve got nothing like that. I told you when we first met, didn’t I? I’m a snake. With cold skin, no emotions, that slithers around searching for prey with its tongue, swallowing down whatever looks tasty.” – Gin Ichimaru

“It’s easier to crush a dream than realize one. Forming a bond is infinitely more difficult than breaking one.” – Gin Ichimaru

“If you ask anyone to name a universal rule that governs animals and humans alike, I bet you most people would answer “survival of the fittest”. There are strong people and there are weak people. At a glance, it looks like the difference is pretty clear-cut. But the truth is, there’s a lot more to it than just a simple battle of “strong” against “weak”, of kill or be killed. You must understand what I’m talking about too, right? The true meaning of “survival of the fittest” isn’t as simple as all that.” – Riruka Dokugamine

“Battles aren’t supposed to be heroic affairs. They are not supposed to be fun or exciting, to us every battle is filled with despair, they are dark, horrifying, grizzly. We should fear warfare, avoid it always and whenever possible choose the path of peace.” – Izuru Kira

“War is not heroic. War is not exhilarating. War is full of despair. It’s dark. It’s dreadful. It’s a thing of sorrow and gloom.”- Izuru Kira

I hope you enjoyed my list of the greatest Bleach quotes. Let me know in the comments which ones are your favorites!

14 Ichigo Kurosaki Quotes That Will Inspire You To Be Yourself

The 15 Best Madara Uchiha Quotes From Naruto of All Time

Tokyo Ghoul is a dark, gritty anime that tells the story of humans living in fear of Ghouls: beings that look human but survive by END_OF_DOCUMENT_TOKEN_TO_BE_REPLACED

What would you do if you could take out your enemies with a single punch? For most people, the answer is nothing, because they don't END_OF_DOCUMENT_TOKEN_TO_BE_REPLACED

Eye color in anime varies. You have blue, purple, gold, brown, black, and red. Typically, anime characters with red eyes are either demons, vampires, or END_OF_DOCUMENT_TOKEN_TO_BE_REPLACED

Fans are no strangers to anime characters with purple eyes. Though it's not a particularly common eye color, there are still quite a few anime END_OF_DOCUMENT_TOKEN_TO_BE_REPLACED

We all know that anime is full of beautiful characters. But sometimes, there are some ugly anime characters too. Today we're going to take a END_OF_DOCUMENT_TOKEN_TO_BE_REPLACED

Some people say that green eyes are the most beautiful eyes color both in real life and in anime series.If you're an anime fan, then END_OF_DOCUMENT_TOKEN_TO_BE_REPLACED