Anime fans around the world know about Chainsaw Man. The series has a huge following, and for good reason! The anime is packed with action, drama, and suspense.

But it's also full of powerful quotes that resonate with fans. Here are 35 of the best Chainsaw Man quotes that will slice straight to your heart! 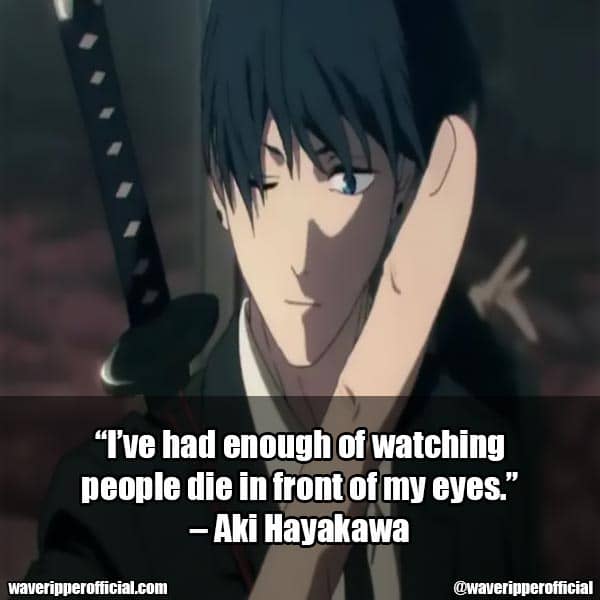 “I’ve had enough of watching people die in front of my eyes.” – Aki Hayakawa

“Enemies are enemies… we’re only using them. I have no intention of getting friendly with one.” – Aki Hayakawa

“It is true that the son of a bitch is a troublemaker… and nobody would be affected if he left. But he seeks to kill the Gun Devil… I can’t kill the Gun Devil by myself… To kill him… I’ll need the help of all the capable Devil Hunters I can to face him. Even if my life is shortened… I won’t let Denji get killed!” – Aki Hayakawa

“If I can kill the guy I want to kill then I don’t care what happens next.” – Aki Hayakawa

“Both the new hunters I think are strong and the one’s I don’t end up either dead or moving to the civilian sector.” – Aki Hayakawa

“I hate humans! Not because they did anything to me. It’s like a devil instinct. I just do.” – Power

“This deceiver told me to do it! Devils can’t lie! Only humans lie!” – Power

“I can only get along with cats. I hate humans! It's just a devil's instinctual sort of hatred.” – Power

“Denji, watch this! And tell the world… that Power is the strongest there is!” – Power

“It must be nice having someone care enough to cry over you.” – Himeno

“You’re my sixth buddy, the others are all dead. They all died because they were useless nobodies.” – Himeno

“The necessary evil you speak of, is just an excuse to justify the evil things you do. Society has no need for that excuse.” – Makima

“I wish to use the Chainsaw Man in order to create a better world. Consider... death, war, and hunger. There are many things in this world that would increase happiness upon removal. And I will remove them all using Chainsaw Man's Power” – Makima

“The Necessary Evil you speak of, is just an excuse to justify the evil things you do. Society has no need for that excuse. The nation regularly takes necessary evils and keeps them on a short leash.” – Makima

“I like humans. In the same way that humans are so fond of dogs. They’re loyal, easily handled, clever and stupid. Just watching them is fun. And also, they love me.” – Makima

“All devils are born with a name. The more that name is feared, the more powerful the devil itself.” – Makima

“All devils are born with a name. The more that name is feared, the more powerful the devil itself.” – Makima

“You know, the devil hunters that devils are scared of are the ones with the most screws loose.” – Kishibe

“I’ll give you my heart, in exchange.. show me your dreams.” – Pochita

“If dreams do come true, I wanna hug a girl before I die.” – Denji

“If I rip you apart then that makes your dream worth less than touching boobs!” – Denji

“Maybe I became a devil hunter for a really shallow reason, but I’m willing to die to keep living like this.” – Denji

“Of all the women I know! Every single one of them tried to kill me!” – Denji

“I want you to live a normal life and die a normal death. Make my dreams come true for me!” – Denji

“If there's a devil that'll be my friend, then I will take it 'cause I never had any.” – Denji

“Did I lose my humanity when I lost my heart?” – Denji

“I wanted to go to college too. But I’m gonna die here!” – Kobeni Higashiyama

“I can’t take it anymore… doing a job like this makes you crazy.” – Kobeni Higashiyama

Top 22 Berserk Quotes To help You Unleash You Inner Beast

If you’re an anime fan, chances are you know about the popular END_OF_DOCUMENT_TOKEN_TO_BE_REPLACED

Calling all anime fans! Are you ready to jump into a hot END_OF_DOCUMENT_TOKEN_TO_BE_REPLACED

Tokyo Revengers is an anime series that is full of quotable moments. END_OF_DOCUMENT_TOKEN_TO_BE_REPLACED

Are you an anime fan looking for inspiring words? You've come to END_OF_DOCUMENT_TOKEN_TO_BE_REPLACED