Tokyo Revengers is an anime series that is full of quotable moments. Each episode leaves you thinking about life in a different way.

Here are some of my favorite Tokyo Revengers quotes that will make you reflect on your own life! 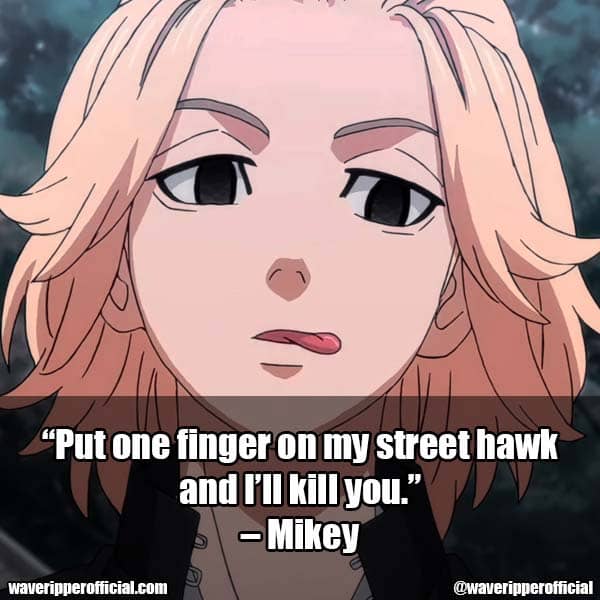 “Put one finger on my street hawk and I’ll kill you.” – Mikey

“You guys can’t even act without a group. The hell do you want?” – Mikey

“He’d never be that dishonest cause he promised me that we’d own the whole country together.” – Mikey

“The most important thing is not to win a fight, but to not let yourself be defeated.” – Mikey

“Toman belongs to me. As long as I’m standing in the background, no one gonna lose.” – Mikey

“I hear you loud and clear, God! You wanna say that my life was utter shit!” – Takemichi Hanagaki

“The moment I thought I was going to die, I remembered Tachibana Hinata.” – Takemichi Hanagaki

“If you wanna win, you’re gonna have to actually kill me.” – Takemichi Hanagaki

“Even in my second life, a failure is still going to be a failure.” – Takemichi Hanagaki

“I’m seriously in the shittiest mood right now. Piss off, or I’ll kill you.” – Takemichi Hanagaki

“If this is real, then I want to change the future.” – Takemichi Hanagaki

“I didn’t expect my life would end up like this. I live in a beat-up apartment with thin walls. My manager who’s younger than me treats me like an idiot. Even kids make fun of me, and I had to apologize to them. I’ve only ever got one girlfriend, and that was in middle school. Just where did I go wrong?” – Takemichi Hanagaki

“In the past and the present, I have to change, or nothing else will.” – Takemichi Hanagaki

“We’ll deal with our problems in our own world.” – Draken

“I'll never forgive you if you take your own life to try to make amends.” – Draken

“There are plenty of guys who are good at fighting, but there aren’t many guys like you, Takemichi.” – Draken

“You don’t have to bow your head. Just have a heart that cares for others.” – Draken

“When someone gives you an inch, don’t take a mile, you moron!” – Draken

“You can't keep getting into fights like that! You just got into a fight over the dumbest thing last week.” – Hinata Tachibana

“Please save everyone. Our crybaby hero!!” – Akkun

“There isn't a single person who's not afraid of a fight. What's important is how you handle it!” – Naoto Tachibana

What is the moral of Tokyo Revengers?

Tokyo Revengers is an anime series that follows the journey of Takemichi, a young man determined to turn back time and save his close friend from being killed.

As Takemichi struggles to confront the past, he learns valuable lessons about redemption and second chances.

The moral of the story? That we all have the power to find hope in even the darkest moments if we simply persist with courage and resilience in our hearts.

With faith, through rediscovering and utilizing our inner potential, we can alter our fate for the better—despite insurmountable adversity that might be standing in our way.

Who is the strongest in Tokyo Revengers verse?

If strength were measured in absolute power, then it would be hard to argue with anybody other than Takemichi Hanagaki.

First off, the supernatural 'Reverse Thread' time travel ability gives him a unique means of tackling any obstacle.

So even when enemies prove superior or immune to ordinary strategies, he can always just go back in time and change their decisions in advance.

Plus, the fact that he is immortal (in certain contexts) until he successfully completes his mission ends up making him virtually unstoppable against most enemies.

In short, there's no question: Takemichi Hanagaki is the strongest character in Tokyo Revengers verse!

What were Tokyo Revengers inspired by?

The popular manga series Tokyo Revengers was inspired by a variety of elements.

Influenced heavily by classic manga titles like Slam Dunk and Suzuka, the creator Ken Wakui also drew on his experiences of growing up in western Japan's Gunma prefecture to include elements of drama, comedy, and suspense.

With its unique mix of equal parts nostalgia and reinvention, Tokyo Revengers is the product of an artist bridging the gap between past and present - effectively creating one of the most entertaining manga series in recent memory.

Why is Tokyo Revengers named so?

Tokyo Revengers is a thrilling manga series about a young man who travels back in time to prevent the death of his friend.

Also known as 'Revenge', it's not just any revenge story — the title hints at more than what meets the eye.

Through passionate and creative storytelling, the writer weaves an intricate web of chance, camaraderie, and consequence, exploring themes of retribution and reconciliation against the vibrant backdrop of Tokyo.

While some characters seek vengeance on their enemies, others seek redemption for their past transgressions. This powerful narrative is jammed into every chapter of Tokyo Revengers, earning it its well-deserved namesake.

So, which one is the most inspiring in these quotes? I hope that you can use these as your mantra in whatever struggles you encounter.

20+ Best Violet Evergarden Quotes To Help You Understand The Anime

If you’re an anime fan, chances are you know about the popular END_OF_DOCUMENT_TOKEN_TO_BE_REPLACED

Calling all anime fans! Are you ready to jump into a hot END_OF_DOCUMENT_TOKEN_TO_BE_REPLACED

Are you an anime fan looking for inspiring words? You've come to END_OF_DOCUMENT_TOKEN_TO_BE_REPLACED

As an anime fan, you can't help but love some of the END_OF_DOCUMENT_TOKEN_TO_BE_REPLACED