35+ Most Meaningful Sailor Moon Quotes That Are Absolute Must-Read

Sailor Moon is one of the most famous shoujo anime from the 90s, and it deserves all the love that it gets. This anime has extremely beautiful animation for its time and an amazing story.

Sailor Moon took us on a lot of adventures over its 5-year run, and it also introduced us to a bunch of amazing characters. The personalities of all the characters in this anime developed as the show slowly progressed.

Today, you are going to find out more about the personalities of these characters as I’m going to give you guys a list of the most meaningful Sailor Moon Quotes. 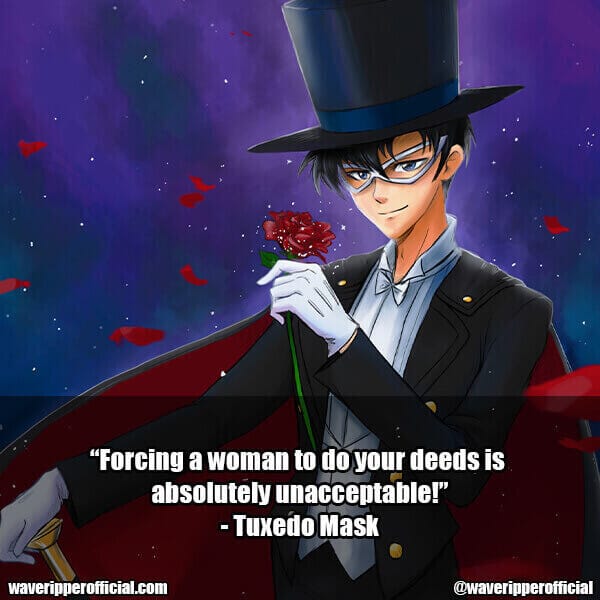 "Forcing a woman to do your deeds is absolutely unacceptable!" - Tuxedo Mask

"What is it about wearing a tuxedo or that little black dress, that makes us feel confident, beautiful, splendid, even invincible?" - Tuxedo Mask

"Who wants that? I'd rather choose to fall in love and be hurt. Sometimes I can't even sleep because I love someone too much" - Usagi Tsukino

"There's always sadness in our lives. It's that sad feeling keeps us going." - Usagi Tsukino

"If a soldier's pride means hurting one another, I don't want it." - Usagi Tsukino

"Endymion, you are my first love, my only love...even if we're reborn, in another life, we'll find each other...and then... We'll fall in love again." - Usagi Tsukino

"Without the bad times, we wouldn't appreciate the good times." - Usagi Tsukino

"How will I ever explain to my friends why I have tire tracks down my back?" - Usagi Tsukino

"I am Sailor Moon, the champion of justice. In the name of the moon, I will right wrong and triumph over evil... and that means you!" - Usagi Tsukino

"No matter how much you change, please don't forget there are people who care for you." - Usagi Tsukino

"I'II just warn you now, I don't know how to use a computer." - Usagi Tsukino

"Mamoru, each and every one of us have stars in our hearts, and you know that the star is shinning when you feel that heat." - Usagi Tsukino

"Pull yourself together, Serena! This is no time for crying!" Usagi Tsukino

"Pretty Guardian of Love and Beauty in a Sailor Suit! Sailor Venus! In the name of Love, I will punish you!" - Sailor Venus

"Believe in yourself. If you don't, you won't get far." - Sailor Venus

"Our duty is to fight for that cause! You understand, don't you? We have to work together and fight so we don't repeat the tragedy of the past again!" - Sailor Venus

"In the past I wore a mask. The real face is also beautiful. I'm the last Sailor Senshi to appear, Sailor Venus!" - Sailpor Venus

"The fire of passion and the power of prayer will defeat evil! I'm Sailor Mars, of the red high heel!" - Sailor Mars

"I may not be much, but every little bit effort counts!" Sailor Neptune

"Always in the end, come hope and rebirth!" - Sailor Saturn

"I always do well in cram school and homework. I'm always reading textbooks. I was number one in the country in the exam. I'm Sailor Mercury!" - Sailor Mercury

"A future is something that you make yourself. You have to believe in it." - Sailor Mercury

"Good friends are treasures woth more than anything in the world!" - Sailor Mercury

"For love and justice, I'm the beautiful girl soldier in training, Sailor Chibi Moon! In place of the future moon, I'll punish you!" - Sailor Mini Moon

This was a list of the most meaningful and heart-touching Sailor Moon Quotes. Sailor Moon is the complete package as it teaches us about life itself.

Every character in this series introduces us to a whole new idea and motivates us in their own unique way.

16 Inspirational Goku Quotes Out Of this World

Tokyo Ghoul is a dark, gritty anime that tells the story of humans living in fear of Ghouls: beings that look human but survive by END_OF_DOCUMENT_TOKEN_TO_BE_REPLACED

What would you do if you could take out your enemies with a single punch? For most people, the answer is nothing, because they don't END_OF_DOCUMENT_TOKEN_TO_BE_REPLACED

Eye color in anime varies. You have blue, purple, gold, brown, black, and red. Typically, anime characters with red eyes are either demons, vampires, or END_OF_DOCUMENT_TOKEN_TO_BE_REPLACED

Fans are no strangers to anime characters with purple eyes. Though it's not a particularly common eye color, there are still quite a few anime END_OF_DOCUMENT_TOKEN_TO_BE_REPLACED

We all know that anime is full of beautiful characters. But sometimes, there are some ugly anime characters too. Today we're going to take a END_OF_DOCUMENT_TOKEN_TO_BE_REPLACED

Some people say that green eyes are the most beautiful eyes color both in real life and in anime series.If you're an anime fan, then END_OF_DOCUMENT_TOKEN_TO_BE_REPLACED