20+ No Game No Life Quotes That Games Can Inspire, Too!

No Game No Life is a series about siblings who prefer the world of virtual reality games over socializing. This might not be an ideal standard for teenagers or anyone.

This show reminds everyone that there are people who couldn't face other people because of their internal battles.

But, this series is not just that. In a deeper context, it has a political meaning, too.

Nope, I'm not gonna discuss that. I am here to share inspirational quotes. So, here they are. I hope you enjoy them.

Best No Game No Life Quotes: 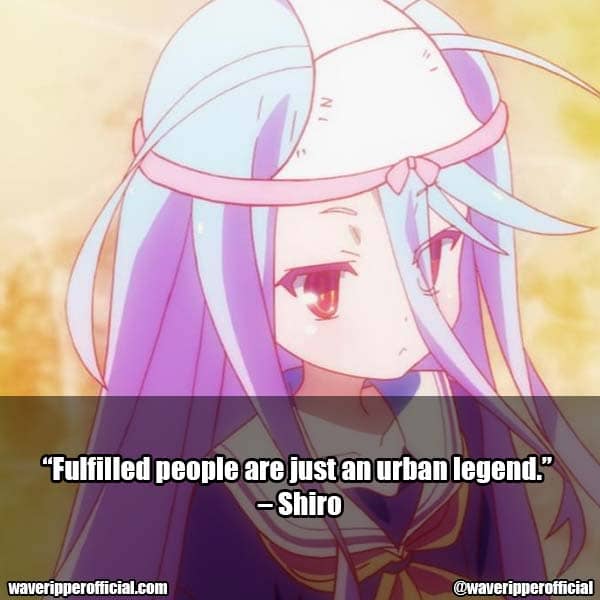 “Chess is no different than tic-tac-toe.” – Shiro

“In fairy tales, when the protagonists end up in a different world, they do their best to get back home, right? But who would want to go back to a world like that?” – Sora

“They say people can change, but is that really true? If they decide they want to fly, will they grow wings? I don't think so. You don't change yourself. Instead, you change how you do things. You have to make your own way. Maybe, you have to create a way to fly, even while you stay the same.” - Sora

“If you think physical toughness and longevity make you strong, you must be seriously lacking in the brain department.” – Sora

“There is no such thing as luck in this world. Rules, prerequisites, psychological states are any number of invisible factors that combine to produce an unpredictable, but inevitable result. The winner of each game is decided before it even begins. Chance is never a factor.” - Sora

“Oppression. Rule by fear. dictatorships. It’s a strange thing. Throughout history, for some reason, the lives of such rulers have always ended in the same way: Assassination by someone who isn’t even part of a combat unit.” – Sora

“What kind of king makes his men fight at the front line while he sits behind them relaxing?” – Sora

“Checkmate” doesn’t mean you’ve simply cornered the enemy king. It’s a declaration that the enemy king is yours. That’s why I said it the first time I met you. “Checkmate.” – Sora

“Whats the probability of drawing the ace of spades from a deck with no jokers? Normaly it would be 1/50. But what if its a brand new deck? The position of cards in a new deck are typically identical, so that means if you take out the jokers and draw the card at the very bottom, it’s the ace of spades almost 100% of the time. Oh that’s right! I didn’t say a word about it being a new deck. Rather, you didn’t ask. Being in the “know” gives you the power to turn the probability of winning from 1.92% to 100%. The more knowledge of a party will be the inevitable victor.” – Sora

“Sorry. Our world isn’t as nice a place as yours. When it comes to war and killing, we have far more expertise than you do.” – Sora

“Throughout all of history, no wise king has ever forced his army to obey him through oppression. People will only truly fight for what is right. And there is only one thing that is truly right in this world! The one true, unchanging righteousness in the world is… cuteness! Cute makes right! All our needs, desires, and instincts seek cuteness, and it is for cuteness that we will give everything we have! That’s just the way men are!” – Sora

“It’s our job as normal people to ensure the potential of those misunderstood ones are realized.” – Sora

Sora's Philosophy on Becoming a Winner

“Because of our weakness, we trained our eyes, ears and the ability to think. Learning how to survive, that’s our trait as humans! The human species can’t use magic and can’t even perceive it – but because we are weak, we have the wisdom to run away from magic and the intelligence to see through it. We don’t have any extraordinary senses. But because we are weak, by learning and gaining experience, we gained the wisdom to achieve the unachievable.” – Sora

“There is more than one way to win a game. You can win without fighting!” – Sora

“There’s no more trusted observer than someone who suspects you.” – Sora

“A temporary defeat is nothing if it leads to ultimate victory!” – Stephanie Dola

“What do you think about your world? Is it fun? Is it easy to live in?” – Tet

“In reality, the least interesting answer is usually the correct one.” – Tet

When someone tells you to stop playing games and grow up, will you do that? Probably, yes, so that you can fit with the norm.

But sometimes, you don't need to do that. You can still become mature and yet have fun playing games you want.

It's just a matter of setting priorities. Play games as some sort of de-stressing (or a business for some people). By the way, don't forget to read my other lists of anime quotes!

35+ Most Meaningful Sailor Moon Quotes That Are Absolute Must-Read

Tokyo Ghoul is a dark, gritty anime that tells the story of humans living in fear of Ghouls: beings that look human but survive by END_OF_DOCUMENT_TOKEN_TO_BE_REPLACED

What would you do if you could take out your enemies with a single punch? For most people, the answer is nothing, because they don't END_OF_DOCUMENT_TOKEN_TO_BE_REPLACED

Eye color in anime varies. You have blue, purple, gold, brown, black, and red. Typically, anime characters with red eyes are either demons, vampires, or END_OF_DOCUMENT_TOKEN_TO_BE_REPLACED

Fans are no strangers to anime characters with purple eyes. Though it's not a particularly common eye color, there are still quite a few anime END_OF_DOCUMENT_TOKEN_TO_BE_REPLACED

We all know that anime is full of beautiful characters. But sometimes, there are some ugly anime characters too. Today we're going to take a END_OF_DOCUMENT_TOKEN_TO_BE_REPLACED

Some people say that green eyes are the most beautiful eyes color both in real life and in anime series.If you're an anime fan, then END_OF_DOCUMENT_TOKEN_TO_BE_REPLACED