32+ Inuyasha Quotes: Words of Wisdom that Capture the Spirit

You might be wondering why Inuyasha Quotes? Inuyasha is a popular anime series that has been running for more than a decade.

In it, Inuyasha, a hanyou (half-demon), and his companions who live in feudal Japan.

Rumiko Takahashi is the author of this series, which she created with her own characters and storylines.

These are some of my favorite quotes from the show that I feel really capture the essence of it! 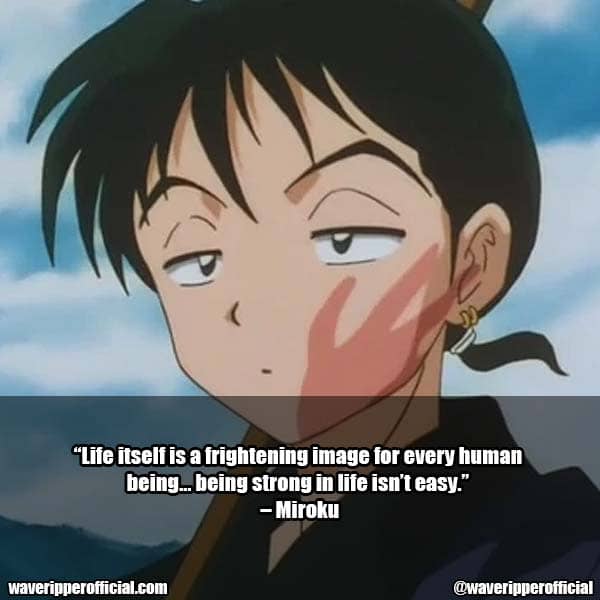 “Life itself is a frightening image for every human being… being strong in life isn’t easy.” – Miroku

“This may come as something of a surprise, but I’m a sore loser.” – Miroku

“What good is this cursed hand if I can’t protect the woman I love?” – Miroku

“Someone the exact opposite of Inuyasha. That’s the perfect guy for me.” – Kagome Higurashi

“I can’t compete with Kikyo, because, after all, I’m still alive.” – Kagome Higurashi

“How could I forget? He’s into dead girls.” – Kagome Higurashi

“Maybe it’s just the morning light, but he looks pretty cool standing there with his sword.” – Kagome Higurashi

“I want you to be happy. I want you to laugh a lot. I don’t know what exactly I’ll be able to do for you, but I’ll always be by your side.” – Kagome Higurashi

“It’s nice not to be alone.” – Kagome Higurashi

“I despise you with my last breath. My spirit will not forget that all consuming hatred. So long that you live, my spirit can not be free.” – Kikyo

“Inuyasha, after meeting you I renounced my position as a shrine priestess. I became an ordinary woman. I longed to embrace you like this when I was alive.” – Kikyo

“The future is not a straight line. There are many different pathways. We must try to decide that future for ourselves.” – Kikyo

“I loathe all things, I despise every living creature who’s bound to time.” – Kikyo

“I thought the only way was to carve out your own place, by force; that’s how I survived. And by the time I knew what was happening, I was all alone.” – Inuyasha

“Heh, I guess somehow without me knowing, it just feels so natural now, to have Kagome by my side.” – Inuyasha

“Someone the exact opposite of Inuyasha. That’s the perfect guy for me.” – Inuyasha

“There was no place for me, so I had to make one for myself, and then I realized, I had a place, but I was the only one in it. I didn’t know any other way to live.” – Inuyasha

“I’ve heard similar threats from a number of poor fools whose memories I keep alive by dancing on their tombstones!” – Inuyasha

“I’m a half-demon, more egotistical and greedy than any other living creature — that’s what human beings are, right?.. But with human blood flowing through my veins, I never give up! Don’t you understand? When you have someone to protect, your power increases multifold!” – Inuyasha

“As long as she’s alive and well, that’s all I hope for. I can’t bear to see another woman die.” – Inuyasha

“Half breed or full breed, to me it don’t matter. But when you insult my mother, that’s when I get angry. For her sake then if for nothing else… I’m gonna make you pay!” – Inuyasha

“You got two legs and a heart beat. What’s stopping you?” – Inuyasha

“That’s pretty bad when you can even give a half demon the creeps.” – Inuyasha

“Only a fool refuses a woman who offers herself.” – Inuyasha

“You shouldn’t talk to yourself. People will wonder.” – Shippo

“I can see why being called a mutt by Koga would upset him… but now that I see him sitting there sniffing the ground he does look like a dog.” – Shippo

“My only ambition is simply to kill as many people as humanly possible.” – Bankotsu

“I seek nothing more than to battle the most powerful beings alive, which excludes the lowly likes of you.” – Sesshomaru

“Can It be that I’m afraid, or is it merely I know not my own limit?” – Sesshomaru

“Be not a fool, I have no such time to waste.” – Sesshomaru

Why was Inuyasha Cancelled?

The series was canceled because the creators wanted the manga series to get finished first.

When the anime was airing back then the manga series was far from finished. So, the anime caught up with the manga.

The creators were faced with a dilemma because they don't want to stray from the manga series. What they did was to show filler episodes, which dismayed many fans.

To save the popularity and appeal of Inuyasha, the anime creators ended the season even though the story (manga) isn't finished yet.

After the last chapter was published, the anime picked up again. So, Inuyasha was not totally canceled.

It was just suspended for a few years so that the originality of the manga story is adapted into the anime version.

Why is Inuyasha so popular?

This anime series is popular because of the balance of romance, action, comedy, and adventure.

In every episode, you get to know new characters who are after the Shikon Jewel and at the same time, witness the development of the main characters.

Another factor is the exposure of Inuyasha. This anime series has more than 100 episodes. Even after the anime was shown on television, there were reruns and online streaming.

This made the series a constant figure in the anime community.

Also, you can find the best anime quotes in the series. The phrases are so simple but the life lessons that Inuyasha likes to impart are so remarkable.

Who is Inuyasha in love with?

The love triangle in Inuyasha is so complicated it'll break your heart. So, who's the lucky girl? Let me discuss a bit of their love history.

Kikyo was a priestess and the original guardian of the Sacred Jewel but because of the scheming Naraku, Kikyo's love turned into hatred.

But, Inuyasha (who fell for Kikyo) didn't know this and was surprised when the priestess, his love interest, sealed her.

Many centuries later, Kagome who is the reincarnation of Kikyo, travels back in time through a well that connected the two worlds.

Unknowingly, this modern girl releases Inuyasha and so their adventure of a love-hate relationship and finding the jewel begins.

During their journey, Inuyasha starts to fall for Kagome but is still in love with Kikyo. It's rather unfortunate because his indecision breaks the high school girl's heart.

In the end, the stubborn prince realizes that his heart belongs to Kagome. Yes, his love for Kikyo is a sweet memory he will always remember.

Does Inuyasha confess his love Kagome?

Not in so many words because this boy is stubborn. In their case, actions speak louder than words. You don't hear them say the words I Love You, even once throughout the series.

Despite this, the two manage to show their love. Even though it took them 3 years to get back together again in their world, their love remains strong.

Which of the most memorable quotes did you use in your life?

Tokyo Ghoul is a dark, gritty anime that tells the story of humans living in fear of Ghouls: beings that look human but survive by END_OF_DOCUMENT_TOKEN_TO_BE_REPLACED

What would you do if you could take out your enemies with a single punch? For most people, the answer is nothing, because they don't END_OF_DOCUMENT_TOKEN_TO_BE_REPLACED

Eye color in anime varies. You have blue, purple, gold, brown, black, and red. Typically, anime characters with red eyes are either demons, vampires, or END_OF_DOCUMENT_TOKEN_TO_BE_REPLACED

Fans are no strangers to anime characters with purple eyes. Though it's not a particularly common eye color, there are still quite a few anime END_OF_DOCUMENT_TOKEN_TO_BE_REPLACED

We all know that anime is full of beautiful characters. But sometimes, there are some ugly anime characters too. Today we're going to take a END_OF_DOCUMENT_TOKEN_TO_BE_REPLACED

Some people say that green eyes are the most beautiful eyes color both in real life and in anime series.If you're an anime fan, then END_OF_DOCUMENT_TOKEN_TO_BE_REPLACED