34 Haikyuu Quotes That Will Push You to Reach Your Aspirations

Haikyuu is one of the most successful sports anime in recent years. The show follows Shouyou Hinata as he is introduced to volleyball and joins Karasuno High School's team, eventually becoming captain.

Along the way, Haikyuu features many inspirational quotes from characters that give viewers a boost when they need it... 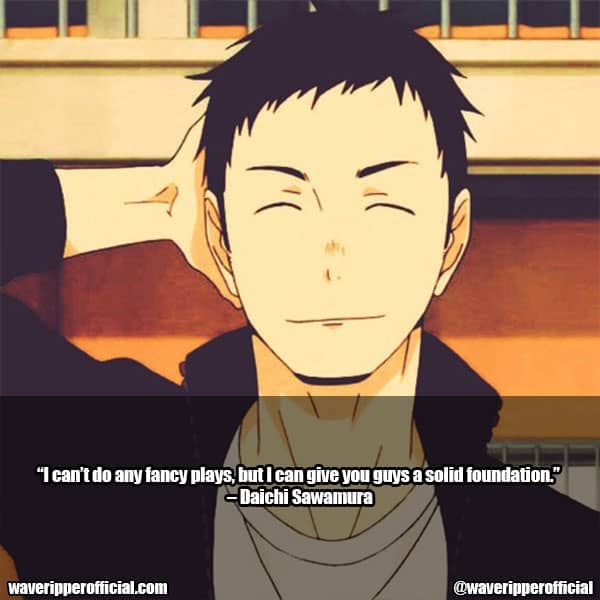 “I can’t do any fancy plays, but I can give you guys a solid foundation.” – Daichi Sawamura

“We’ll never win if we don’t believe we can.” – Daichi Sawamura

“You should know better than anyone that you’ve failed the moment you lose your cool.” – Daichi Sawamura

“Even if we’re not confident that we’ll win, even if others tell us we don’t stand a chance, we must never tell ourselves that.” – Daichi Sawamura

“When colors mix they become muddy and messy. But when they all blend together, the final result is the color that wins against all others… Black!” – Ittetsu Takeda

“Being weak means that there is room to grow.” – Ittetsu Takeda

“Birds with the wind in their wings are flying across the great blue sky right now. And all of you should be able to make it! To the highest limit, to the farthest limit!” – Ittetsu Takeda﻿

“The future belongs to those who believe in the beauty of their dreams.” – Shoyo Hinata

“There’s no guarantee that the weapon that worked first will continue working until the end. I have to keep moving forward. I have to keep going! My greatest weapon is not getting caught!” – Shoyo Hinata

“Spiking isn’t just about slamming the ball to the floor. If you keep your cool, you’ll be able to see what action to take.” – Kotaro Bokuto

“Little by little, what you’ve begun will naturally become important to you. What you need at the start is a little bit of curiosity.” – Kiyoko Shimizu

“Motivation? What more do you need than pride!” – Tadashi Yamaguchi

“Someone who can’t see the opponent standing right in front of him, can’t defeat the opponent that lies beyond!” – Hajime Iwaizumi

“Everyone thinks that being small is more detrimental than it actually is. Even though being smaller puts you at a disadvantage in volleyball, it doesn’t make you completely helpless!” – Korai Hoshiumi

“Luck? No way. You’re only an ace if you’re able to create miracles.” – Tsutomu Goshiki

“Bigger will always be stronger. That is nature’s logic.” – Tanji Washijo

“To strike past all obstacles…. That’s the ace.” – Asahi Azumane

“No encouragement, just the truth. No more words are needed from the great ace to the other ace.” – Reon Ohira

“Even if a game doesn’t seem clearable at first, after playing it over and over again, you can conquer it.” – Kenma Kozume

“The game will be over if you beat him, so isn’t it more fun having you can’t seem to defeat?” – Tetsuro Kuroo

“We’re not hung up on winning or losing, so it’ll be troublesome for you guys to lose. How about we throw the game for you?” – Tsukishima Kei

“Today might be the chance to grasp the chance to let your talent bloom. Maybe tomorrow, the day after, or next year… Maybe even when you’re thirty. I’m not sure if physique has anything to do with it, but if you think that it will never come, it probably never will.” – Tooru Oikawa

“Bokuto is the kind of person that compels you to give it you all, because you know he’s giving it his all.” – Keiji Akaashi

“The fact that he’s different from other people will probably end up being his strength.” – Takashi Utsui

“Being the best decoy ever is as cool as being the ace.” – Tobio Kageyama

“The last ones standing are the victors. Only the strongest. If you want to be the last one standing become strong.” – Tobio Kageyama

“When you have a brilliant ace, their very existence is a brilliant decoy.” – Kenjiro Shirabu

“There’s only one thing to do in order to win. Practice practice practice. Even if you’re puking your guts out, pick up the ball and continue.” – Keishin Ukai

“I’m a libero. I’d guard your backs with my life If I had to.” – Yu Nishinoya

Is there any BL in Haikyuu?

Boy's love is a little bit common in manga and anime series, especially if most characters are composed of boys. Take for example the Haikyuu sports anime series.

Many of us have wondered if there is any BL in the anime. But, let me clear first what does a boy's love mean? In the context of romance, there are no confirmed "cases" of BL.

However, in the context of friendship, of course, you can see lots of this amazing relationship. Some even date back to childhood or middle school.

Why did Daichi die in Haikyuu?

I'll tell you why Daichi died in Haikyuu.

I'm going, to be honest with you, the answer isn't really that interesting or remarkable. Basically, it was because of his heart condition and he collapsed on the court during practice one day.

Which caused him to die a few days later when they couldn't revive him again after another collapse since there wasn’t anything else wrong with him besides this issue from birth.

So it seemed natural for death to take its course at some point as far as I can remember but if someone has more information please share!

What is the most popular ship in Haikyuu?

Aside from the inspiring and powerful Haikyuu quotes, "shipping" is also a popular thing in this anime.

In the Haikyuu fandom, many anime fans like to think of ships. Most often, the fandom community loves yaoi or BL (in a romantic context).

In this anime series, the most popular one is the ship between Hinata Shouyo and Kageyama Tobio. The duo is popularly known as KageHina.

What is the message of Haikyuu?

Haikyuu is sports anime. Thus, it dwells on coaching, teamwork, and friendship. No matter what team you are on, basketball, volleyball team, soccer, or football, these important aspects in life are critical to succeeding.

Even if the series had been finished for years, many still remember the message the series wants to tell. The quotes still inspire many anime fans.

If you’re an anime fan, chances are you know about the popular series Vampire Knight. It follows a young girl named Yuuki as she navigates END_OF_DOCUMENT_TOKEN_TO_BE_REPLACED

Anime fans are sure to be familiar with the many anime girls that rock black hair. From the mysterious and dangerous-looking anime girl in an END_OF_DOCUMENT_TOKEN_TO_BE_REPLACED

Anime characters with tattoos can often tell a story and add depth to the character’s motivations and feelings. Whether they are intricate designs or small END_OF_DOCUMENT_TOKEN_TO_BE_REPLACED

Calling all anime fans! Are you ready to jump into a hot and heavy debate about the hottest Chainsaw Man female characters? Whether you're new END_OF_DOCUMENT_TOKEN_TO_BE_REPLACED

Tokyo Revengers is an anime series that is full of quotable moments. Each episode leaves you thinking about life in a different way. Here are END_OF_DOCUMENT_TOKEN_TO_BE_REPLACED

Are you an anime fan looking for inspiring words? You've come to the right place! Classroom of the Elite is a unique manga that provides END_OF_DOCUMENT_TOKEN_TO_BE_REPLACED