If you're one of the fans who wanted to see green haired anime girls, here is a list for you. With St Patrick's celebration around the corner, it would be great to have an inspiration.

These green-haired anime girls include Tatsumaki (one punch man), Mion and Shion, Sailor Neptune, among other anime girls. Enjoy reading and I hope you find your favorite or favorites after reading this. 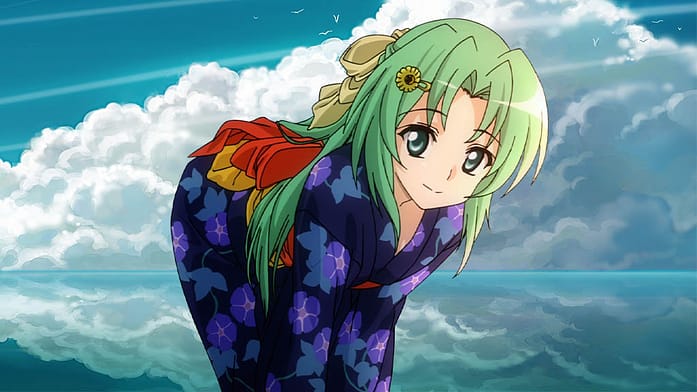 This anime girl is the twin sister of Shion Sonozaki (and is the second-born bearing the name Shion.)

However, because of the sister’s constant switching, Shion became Mion and vice versa.

In the story, this lovely girl has a tattoo that signifies being the first-born and being the heir to the Sonozaki empire. She has minty green hair tied with a ribbon and aquamarine eyes.

Her character is quite tomboyish and super energetic. She’s confident and sociable. This green-haired anime girl loves every type of games because she could use her competitive side.

Tatsumaki is petite with a brash and moody attitude. She has a baby face framed with green hair, curling naturally.

This young heroine wears a fitted black, long-sleeved dress with high-cut slits showing her legs. This green-haired anime girl is quite arrogant and kills a monster that seems impertinent.

This feisty lady doesn’t want to get bored. So, when the Hero Association doesn’t have a job for her, this brave heroine finds monsters to kill.

Tatsumaki from One Punch Man does have a soft side and only shows it to her sister, Fubuki.

This green-haired anime girl is the real first-born of the Sonozaki twin sister. In fact, she went to St. Lucia School to learn about being a lady of the house.

This pretty maiden would be inheriting the vast riches of her family. Their constant switching made her the second born, instead.

This anime girl is quite refined compared to the other twin Sonozaki (Mion). However, she’s manipulative and has a rebellious streak.

Like her twin sister, she has green hair that she ties with two yellow ribbons on each side.

She's tall, slim, and rather athletic. This lean physique makes her look like a boy. Often, her friends give her male-like roles.

Minami is the silent type among the Lucky Star girls. Other girls mistake her demeanor as being cold, but her personality is kind.

She’s close to Miyuki because they stay in the same neighborhood.

Suu of the anime series Monster Musume is a Slime monster with a blue gelatinous form. She transforms into a human when she’s interacting with other girls and boys.

This cutie could transform and take human form by absorbing water. Often, her humanoid form has green hair with three antennae on its ends.

Most of the time, the sexy slime monster wears a raincoat and boots since these types are waterproof.

Her personality is sunny and child-like. This anime girl with green hair doesn’t hold malice to other girls or boys, but her oblivious take on the world often puts other’s lives in danger.

Erin belongs to the Mist people. So, she inherits the green hair and eyes. This color is common to her family. She's caring and kind, to the point of putting other’s well-being above hers.

She is the protagonist in the anime Kemono no Souja Erin. Like the Mist people, this anime girl knows how to wield magic and uses this magic to care for nature, animals, and humans.

Erin is caring and kind, to the point of putting other’s well-being above hers.

Tsubomi Kido is one of the anime characters in Mekaku Actors.

Her preferred fashion is a jersey jacket with a headphone design and iPod button. This anime girl has green hair that grows long at her back and black eyes.

Her appearance is a little lean, making her look boyish. She has a mature, serious, and kind personality.

This tomboyish girl is short-tempered when Kano is around. She’s great at cooking, likes cute things but afraid of roller coasters and horror movies.

Ironically, Kido leads the blindfold gang. This great girl tries her best to be a great leader to Blindfold Gang despite her flaws and shortcomings.

Michiru is also known as the hero character Sailor Neptune. She's one of the Sailor Soldiers.

Her most notable traits are beautiful, delicate, and slim. The beautiful heroine stands at an average height with medium length green hair.

Elegant and sophisticated, Michiru is the epitome of an ideal princess as Usagi used to say. She’s somewhat coldhearted and quick to anger.

This green-haired anime girl is not a sociable person. She only befriends a select few, making her look like a snob to others.

Akeno Shiranui - My Bride is a Mermaid

Akeno Shiranui from My Bride is a Mermaid has dark green hair tied into a ponytail with square bangs. Her skin is pale and her stature is skinny.

She’s hostile at the beginning of the series. But, as this anime girl with green hair gets to know the other protagonists, she begins to like and warm up to them.

In the end, she has to fulfill her duty as a Knight-in-training. The villain used this duty to turn her against her comrade.

Despite her hostile demeanor and bravery, this anime girl with green hair is afraid of ghosts. It was later revealed that she likes Nagasumi Michishio.

Asa Shigure is half-human and half-demon with short green hair at the beginning of the series. She lets it grow up to her back.

This fragile girl has weak health and is often sick when she was a child. Her sickly body is the result of her magic powers.

She couldn’t handle the strength of this power. Despite having a weak body, Asa is energetic.

This anime girl also loves cooking and is excellent at it. She has feelings for Rin and later becomes her boyfriend.

Inchou - My Bride is a Mermaid

Inchou from My Bride is a Mermaid is the class president of her school. That’s her alter ego when at school.

This beautiful girl wears large glasses and ties her green hair in two ponytails. This is to hide her beautiful eyes and face.

Inchou has strong feelings for Nagasumi Michishio. One day, this anime character with green hair writes him a love letter and decides to confess her love.

Unfortunately, she mistakenly reveals her feelings to Sun, Nagasumi’s love interest. This begins the war between them.

Mashiro Kuna is a young lady with lime green hair and hazel eyes. She is a former Shinigami in the Soul Society of the anime series Bleach.

This talkative girl wears a white suit with an orange scarf, gloves, boots, and matching googles.

Mashiro became a Visored because of a hollow affecting her, her squadmates, and other reapers as well. She has an annoying personality, constantly complaining but is strong and could fight.

Tsuyu Asui from My Hero Academia has dark sea green hair that runs along her back. She leaps and acts like a frog.

Her hands are large while her body is slender. This frog-looking girl is a student in Hero Academy where she studies to strengthen and enhance her skills.

Other anime girls in the series regard her as a weird person. It's because Tsuyu Asui has this blank expression that creeps her classmates.

Her face rarely shows emotions. Her mannerisms while thinking is a finger tapping her lips.

C2/C.C is a slim girl with light green hair that runs along her back up to her waist. She often wears a white suit that looks like a straight jacket.

This loyal girl often acts as a decoy to Lelouch. Unsurprisingly, she’s madly in love with the main protagonist.

C.C has a scar on her breast that is a trait of a Geass sigil. This signifies immortality in the story. Sigils could bestow powers to someone.

Alpha Hatsuseno is the main anime character in Yokohama Kaidashi Kikou. She has green hair tied in a ribbon at the back of her head with side bangs.

This intuitive girl is a robot prototype, Model A7-M2, and the first of this robot series. She has a deep liking for people and machines. Her personality is sweet with a good disposition of the world.

Despite being a robot, Alpha can think deeply about life and everyone. She has made a lot of friends because of her good-natured approach with anybody.

As this adventurous girl becomes accustomed to living with people, she learns a lot.

Flora Klemm from Asterisk War has green eyes that match her green hair in medium length. She is an orphan whom Julis Alexia Van Riessfield wants to help.

Flora always wears a uniform of a maid. She’s cute with a naïve nature and a mild lisp. Her origin is of Genestellar, possessing a physical ability and a prana aura.

Tall, slim, and fair-skinned, everyone finds her beautiful.

Lena Lee has a sweet, kind, and caring personality. She often gets angry when she thinks her family or friends are at risk.

Her world revolves around her family, friends, and persons whom she considered family.

Vert is one of the anime girls in Hyperdimension Neptunia. She is curvy and busty with light blond long hair.

When this goddess transforms to Green Heart, her hair switches to light foamy green, like the sea. Her green hair is longer than usual and tied in a ponytail when transformed into the Green Heart.

Out of the Hyperdimension characters, Vert is considered the calmest.

So, which of the anime girls with green hair are your favorites? Is it the green-haired character of Tatsumaki (one punch man) or C.C of Code Geass?

We earn a commission from Amazon & other affiliates if you make a purchase at no additional cost to you.

26 Of The Most Gorgeous Anime Girls With White Hair

Tokyo Ghoul is a dark, gritty anime that tells the story of humans living in fear of Ghouls: beings that look human but survive by END_OF_DOCUMENT_TOKEN_TO_BE_REPLACED

What would you do if you could take out your enemies with a single punch? For most people, the answer is nothing, because they don't END_OF_DOCUMENT_TOKEN_TO_BE_REPLACED

Eye color in anime varies. You have blue, purple, gold, brown, black, and red. Typically, anime characters with red eyes are either demons, vampires, or END_OF_DOCUMENT_TOKEN_TO_BE_REPLACED

Fans are no strangers to anime characters with purple eyes. Though it's not a particularly common eye color, there are still quite a few anime END_OF_DOCUMENT_TOKEN_TO_BE_REPLACED

We all know that anime is full of beautiful characters. But sometimes, there are some ugly anime characters too. Today we're going to take a END_OF_DOCUMENT_TOKEN_TO_BE_REPLACED

Some people say that green eyes are the most beautiful eyes color both in real life and in anime series.If you're an anime fan, then END_OF_DOCUMENT_TOKEN_TO_BE_REPLACED