Angel Beats Quotes: 18+ Reminders that You Have a Choice

I've been watching Angel Beats, and I have to say that it's one of the most beautiful animes in existence.

There are so many quotes from this show that make me think about my life and how much control I really do have over my own destiny... 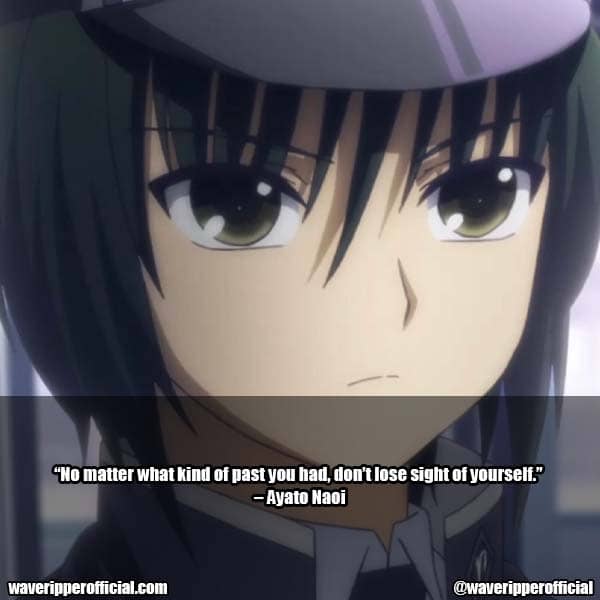 “No matter what kind of past you had, don’t lose sight of yourself.” – Ayato Naoi

“Ever since that day, I’ve kept this broom balanced on my fingertip.” – Shiina

“My life after losing her… Is it over as well? The days I spent satisfied with the happiness I never noticed… Those times had passed away. For me… There’s nothing left at all.” – Yuzuru Otonashi

“Our lives were real! Not a single moment of them were fake! Everyone lived the best they could. We carved those memories into ourselves. Memories of living as hard as we could. No matter what kind they were, they’re the life we led. Erasing them in the blink of an eye like that… Wasn’t your life also real to you?” – Yuzuru Otonashi

“Even if we forget the faces of our friends, We will never forget the bonds that were carved into our souls.” – Yuzuru Otonashi

“Watching TV or playing games alone is more fun. Playing along with your friends’ hobbies… Laughing at their jokes when they’re not funny… All that does is tire me out.” – Yuzuru Otonashi

“I’m pretty confident about my reflexes. And pretty strong too. I’m a guy after all. When the time comes, I can protect you even at the cost of my life.” – Hideki Hinata

“God is so cruel. He stole all my happiness away.” - Yui

“When we were still in the world of living, death was something that came indiscriminately and randomly. So, there was no way to fight it.” – Yuri Nakamura

“Let me tell you something. Humans don’t even have the patience to wait even ten minutes for something!” – Yuri Nakamura

“This is my life. I can’t entrust it to someone, I can’t steal a new one, I can’t force it on others, I can’t forget it or erase it. Perhaps, I can’t stomp over it, laugh at it, or beautify it! I can’t anything! I’d have to accept my one shot at life no matter how cruel, merciless, or unfair I thought it was! Sir, don’t you understand? That is why I must fight. I must keep on fighting! Because… because I can never [slams her desk with her hands] accept that kind of life!” – Yuri Nakamura

“We have no choice but to accept the one and only life we’re given, no matter how cruel and heartless it might be.” – Yuri Nakamura

“I heard that when things were painful for her, she’d cover her ears with headphones and escape to the world of music. I tried it too. It was like everything was blown away. The vocals screamed for me. They grieved for me. The ones who put on the act of common sense were wrong. Those who cried were right.” – Misami Iwasawa

“Truly and deeply, thank you for giving, my life to me.” – Kanade Tachibana

So, yeah! Live life to the fullest. Be pretty confident that no matter what kind of struggles come your way, you can make it.

Don't live or imitate someone else's life, especially if you aren't happy. The Almighty Creator breathes His amazing grace for you to enjoy and be happy.

Remember YOU HAVE ALWAYS A CHOICE!!!

The 15 Best Madara Uchiha Quotes From Naruto Of All Time

If you're a fan of Goblin Slayer, then you know that the show can be pretty dark and violent. But it's also full of inspiring END_OF_DOCUMENT_TOKEN_TO_BE_REPLACED

In One Piece, there are many memorable quotes from the different characters. Whether they are funny, inspiring, or heartbreaking, these quotes stay with you long END_OF_DOCUMENT_TOKEN_TO_BE_REPLACED

Kakashi Hatake is one of the most popular characters in the Naruto series. He is known for being a skilled ninja, as well as his END_OF_DOCUMENT_TOKEN_TO_BE_REPLACED

Might Guy is one of the most entertaining characters in "Naruto Shippuden". He's always cracking jokes, and he's never afraid to speak his mind.In fact, END_OF_DOCUMENT_TOKEN_TO_BE_REPLACED

In the anime series Naruto, there is one character who always stands out to me and that is Gaara. He is a complex character with END_OF_DOCUMENT_TOKEN_TO_BE_REPLACED

Fruits Basket is a Japanese manga series originally serialized in a magazine called Hana to Yume from 1998 to 2006. It follows the Sohma family END_OF_DOCUMENT_TOKEN_TO_BE_REPLACED