The 15 Best Madara Uchiha Quotes From Naruto of All Time 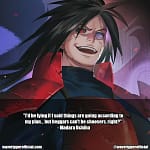 Madara Uchiha quotes make for some of the most powerful and inspiring passages in Naruto.

He is one of the few characters that has a deep understanding on life, happiness, and death. His wisdom can be applied to many aspects of our lives...

"Man seeks peace, yet at the same time yearning for war... Those are the two realms belonging solely to man. Thinking of peace whilst spilling blood is something that only humans could do. They're two sides of the same coin... to protect something... another must be sacrificed." - Madara Uchiha

"Wake up to reality! Nothing ever goes as planned in this world. The longer you live, the more you realize that in this reality only pain, suffering and futility exist." - Madara Uchiha

"The longer you live... The more you realize that reality is just made of pain, suffering and emptiness..." - Madara Uchiha

"In this world, wherever there is light - there are also shadows. As long as the concept of winners exists, there must also be losers. The selfish desire of wanting to maintain peace causes wars, and hatred is born to protect love." - Madara Uchiha

"Talking about peace whilst spilling blood, it's something that only humans can do." - Madara Uchiha

"The Uchiha is a clan destined for revenge..." - Madara Uchiha

"Love is not necessary, power is the only true necessity." - Madara Uchiha

"When a man learns to love, he must bear the risk of hatred." - Madara Uchiha

"The concept of hope is nothing more than giving up. A word that holds no true meaning." - Madara Uchiha

"Nine-Tails, you are merely a momentary life, a temporary existence of coalesced energy... energy that once was a single, ultimate form! An unstable force, lacking in intelligence or sapience, you require a guide to show you purpose. That guide is the Uchiha! The tailed beasts are but slaves to those with blessed eyes. Obey!" - Madara Uchiha

"Power is not will, it is the phenomenon of physically making things happen." - Madara Uchiha

"I'd be lying if I said things are going according to my plan... but beggars can't be choosers, right?" - Madar Uchiha

"Would you consider dying together "Teamwork" as well?" - Madara Uchiha

What did Madara say about reality?

In the world of Naruto (anime), there are many characters with different views on reality.

What does Madara Uchiha mean?

Madara means "The Red Eyes" in Japanese. It is the name of a character from the popular anime series, Naruto. The character was created by Masashi Kishimoto and it stars as one of the main villains in Naruto Shippuden.

He is also known as Tobi because he wears a mask with an expressionless face on it that has only two holes for eyes-hence why his nickname is Tobi meaning “Pretense” or “Hollow Shell”.

Who is the child of Madara Uchiha?

This is an interesting question for many people, especially those who are fans of the anime series Naruto.

The answer to this question may not be as simple as one thinks it would be because there are some conflicting reports about that matter.

Some say that he fathered a son with his wife Izumi and named him Menma while others claim that he had no children at all but instead only cared about himself and what was best for him.

However, both opinions have their own arguments in favor of them so we will just have to wait until more information comes out before we can figure out which side has the most valid points.

If you're a fan of Goblin Slayer, then you know that the show can be pretty dark and violent. But it's also full of inspiring END_OF_DOCUMENT_TOKEN_TO_BE_REPLACED

In One Piece, there are many memorable quotes from the different characters. Whether they are funny, inspiring, or heartbreaking, these quotes stay with you long END_OF_DOCUMENT_TOKEN_TO_BE_REPLACED

Kakashi Hatake is one of the most popular characters in the Naruto series. He is known for being a skilled ninja, as well as his END_OF_DOCUMENT_TOKEN_TO_BE_REPLACED

Might Guy is one of the most entertaining characters in "Naruto Shippuden". He's always cracking jokes, and he's never afraid to speak his mind.In fact, END_OF_DOCUMENT_TOKEN_TO_BE_REPLACED

In the anime series Naruto, there is one character who always stands out to me and that is Gaara. He is a complex character with END_OF_DOCUMENT_TOKEN_TO_BE_REPLACED