Jojo's Bizarre Adventure is a story about the life of a man with an amazing destiny. It has been in production for over 20+ years and it's still going strong.

As you might know, there are many memorable quotes from this series that help to illustrate certain points about life or provide some comic relief during difficult times.

In this article, we will go through 22 quotes from Jojo’s Bizarre Adventure that is sure to remind you why it's so good! 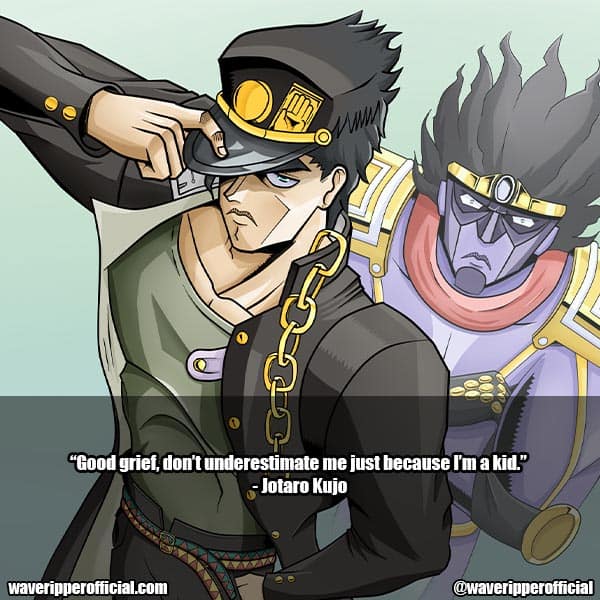 “You truly are the lowest scum in history. You can’t pay back what you owe with money.” – Jotaro Kujo

“Impossible? We did a lot of impossible things on this journey. I’m tired of hearing that things are impossible or useless. Those words mean nothing to us.” – Jotaro Kujo

"What? The loser is evil? Well, in that case... you're the evil one after all! The one who'll be the judge is my stand! - Jotaro Kujo

“I’m willing to see our transaction through, are you sir? I’m fighting to protect my family from those that wish it harm, I doubt very much that your resolve is equal to mine.” – Jonathan Joestar

“DIOOO! I’m going to make you cry like a baby!” - Jonathan Joestar

“Jojo, being human means having limits. I’ve learned something. The more carefully you scheme, the more unexpected events come along.” – Dio Brando

“Go out there and take this useless world for all you can get.” – Dio Brando

“I shall give you a chance. Go down two steps and I’ll let you join my side again. But if you’d rather die, than climb those stairs.” – Dio Brando

“Most men’s hearts are restrained by mortal, recoiling in fear from the fabulous fruits of evil. But some do not constrain themselves to the mortality and its tyranny. They are the Vanguard. Serve me, Jack the Ripper. Submit yourself to me, and I shall give powers beyond your belief. I ask for only one thing in return.” – Dio Brando

“Well, my arms are folded and my eyes are closed, this is a victory laugh, Esidisi. You lost today because you snoozed for 2000 years.” – Joseph Joestar

“Shoot me if you want to! But you better be prepared to face the consequences. The moment you try to pull that trigger, I’ll snap your fingers in half like matchsticks!” – Joseph Joestar

“You’re god damn right! Everything worked out according to the plan… From the very beginning! (I just got lucky, but thinking I outsmarted him will drive Kars nuts).” – Joseph Joestar

“You’ve got to say something more like this before you get revenge. My name is Jean-Pierre Polnareff. For my sister’s honor, and so that my friend Avdol can rest in peace… I’m going to hurl you into the depths of despair!” – Jean Pierre

“The last thing I need right now is listening to trash like you, let alone being touched by you. But if you want to embrace me, feel free to try… as long as you don’t mind a painful demise.” – Lisa Lisa

“Walking on water when you obviously lack proper training is quite an accomplishment. However, if you truly wish to master Hamon in a month you must be prepared to die for it!” – Lisa Lisa

“My fourth wish, that is…to not listen to your wishes, Magician’s Red won’t forgive you. Not happening.” – Muhammad

“And that’s why I turned one of your pistols into a banana. It’s your last meal. Take your time… enjoy it.” – Giorno

“When I was a kid, I saw Mona Lisa from my grammar school art book….The fist time I saw her, with her hands on her knee…how do I say this…I had a boner.” – Yoshikage Kira

“I don’t want evil from half a century to take you.” – Erina Pendleton

“Suppose that you were sitting down at a table. The napkins are in front of you, which napkin would you take? The one on your ‘left’? Or the one on your ‘right’? The one on your left side? Or the one on your right side? Usually you would take the one on your left side. That is ‘correct’ too. But in a larger sense on society, that is wrong. Perhaps I could even substitute ‘society’ with the ‘Universe’. The correct answer is that ‘It is determined by the one who takes his or her own napkin first.’ …Yes? If the first one takes the napkin to their right, then there’s no choice but for others to also take the ‘right’ napkin. The same goes for the left. Everyone else will take the napkin to their left, because they have no other option. This is ‘society’.” – Funny Valentine

“The ultimate being embodies the powers of each and every living thing, all lives gather as one. And… How beautiful it shines! Truly the most wonderful thing I have ever beheld… I have finally, finally tamed the sun!” – Kars

It's a mystery that has confounded fans for years: what is Jotaro Kujo's catchphrase? A quick search of the internet will lead you to believe he doesn't have one.

He does, but it's difficult to find in English. There are two phrases he uses in the Japanese version of his show; "Ora Ora" and "Za Warudo." The former means 'now now,' and is used when starting an attack or a fight.

What does DIO say in JoJo?

This is a question that has plagued many of us for years. If you're anything like me, this is probably the first thing you think about when someone mentions Jojo's Bizarre Adventure.

Well, I'm here to tell you what he says! In an interview with Araki Hirohiko, creator of Jojo's Bizarre Adventure, it was revealed that Dio always says "WRYYY!"

In the manga and anime series there are many instances where Dio can be heard saying this but most notably at the end of Part 3: Stardust Crusaders  in episode 146-147 (Episode 41 on Crunchyroll) when he unleashes his final.

What is the most powerful stand in JoJo?

The most powerful stand in JoJo's Bizarre Adventure is a difficult question to answer. Some say it's Killer Queen, some say King Crimson, and others even go so far as to say that it's Crazy Diamond.

The only thing we can agree on is that the power of these stands is insane!

Tokyo Ghoul is a dark, gritty anime that tells the story of humans living in fear of Ghouls: beings that look human but survive by END_OF_DOCUMENT_TOKEN_TO_BE_REPLACED

What would you do if you could take out your enemies with a single punch? For most people, the answer is nothing, because they don't END_OF_DOCUMENT_TOKEN_TO_BE_REPLACED

Eye color in anime varies. You have blue, purple, gold, brown, black, and red. Typically, anime characters with red eyes are either demons, vampires, or END_OF_DOCUMENT_TOKEN_TO_BE_REPLACED

Fans are no strangers to anime characters with purple eyes. Though it's not a particularly common eye color, there are still quite a few anime END_OF_DOCUMENT_TOKEN_TO_BE_REPLACED

We all know that anime is full of beautiful characters. But sometimes, there are some ugly anime characters too. Today we're going to take a END_OF_DOCUMENT_TOKEN_TO_BE_REPLACED

Some people say that green eyes are the most beautiful eyes color both in real life and in anime series.If you're an anime fan, then END_OF_DOCUMENT_TOKEN_TO_BE_REPLACED