Akame ga Kill series is one of those shows that made an impression on lots of anime fans.

It has a one-of-a-kind story but the most notable ones are the Akame Ga Kill quotes that will keep you motivated during painful & despair-ridden experiences.

So, here are the quotes and I hope you enjoy them. 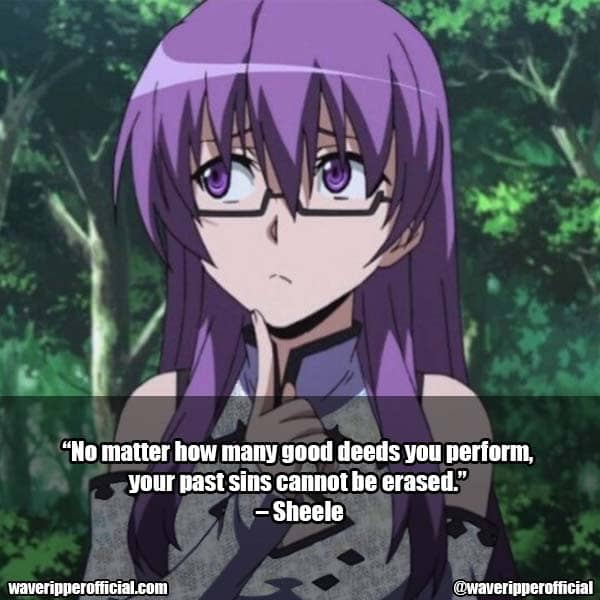 “No matter how many good deeds you perform, your past sins cannot be erased.” – Sheele

“I had a friend who was very kind to me. No matter what happened or how badly I messed up, she never once made fun of me. The time I spent with her was the only ray of happiness in my entire life.” – Sheele

“I’ve never been able to do anything right. I couldn’t take pride in a single thing I did. People would always make mean comments about me, like maybe I was crazy or something.” – Sheele

“I don’t understand the feelings of the weak. The law of the world is survival of the fittest. It’s how the weak are weeded out. It just means those people that died were too weak. It’s only natural for the weak to perish.” – Esdeath

“The weak are destined to lie beneath the boots of the strong. If that angers you, overcome your deficits.” – Esdeath

“Only those who comprehend the implications of war can be capable of bearing arms.” – Akame

“I chose night raid because my heart told me it was the right thing to do. I simply decided to follow the path in which I believe.” – Akame

“To kill the one you love… If someone else will do it anyway, I’d rather do it myself.” – Kurome

“Everyone has their own reasons to fight! Sometimes, you have to settle it yourself or there’s no way forward!” – Tatsumi

“The reason doesn’t matter. As long as a tiny bit of hope exists, that’s all that matters.” – Tatsumi

“You’ll have some painful, despair-ridden experiences. In fact, most of them will be tragic. But we chose to walk this path.” – Bulat

“The hot blood that flows through my body… is not something that can be suppressed by other people!” – Bulat

“You won’t survive if you just let your boiling blood dictate your actions.” – Bulat

“People who abuse power they were born into piss me off more than anything else.” – Mine

“Only I can help myself, and in the future, I can make up for all my misfortunes and change the world into a place where there’s no irrational discrimination and that’s why there’s no way in hell that I can die here!” – Mine

“No one would help me. And that’s when I understood… That only I could help myself.” – Mine

Akame always says "houmuru" whenever she's trying to kill someone. Roughly, the word translates to bury or banish to oblivion.

But it could mean, "eliminate", "I will kill", or something similar or close to the act of killing and death.

What does Akame Ga kill mean in English?

The title may mean "Akame kills" the target. Some say that the phrase may mean "I will kill." Throughout the series, Akame and her team have various targets.

Unfortunately, Tatsumi died in the series while fighting against the Emperor.

His gallantry has saved and freed millions of lives from the oppressive government.

But in the manga, this brave young man has married the girl of his dreams and has kids with Mine.

So, he could have been revived or something. The anime series just didn't show it.

Is Akame in love with Tatsumi?

Maybe, but Akame never confesses her love to him. It could be that the girl feels undeserving of Tatsumi's affection. Also, she knows how her friend felt for Mine.

Besides, this series is not about romance but more about political oppression, action, and redemption.

Perhaps, to this ruthless assassin, her friendship with Tatsumi is more valuable than a romantic relationship.

Akame ga Kill may have poor character development as other fans would put it. But, the quotes dealing with hope, overconfidence, and arrogance are something to live by.

Remember, hope exists. At the same time, you create your own path.

If you're a fan of Goblin Slayer, then you know that the show can be pretty dark and violent. But it's also full of inspiring END_OF_DOCUMENT_TOKEN_TO_BE_REPLACED

In One Piece, there are many memorable quotes from the different characters. Whether they are funny, inspiring, or heartbreaking, these quotes stay with you long END_OF_DOCUMENT_TOKEN_TO_BE_REPLACED

Kakashi Hatake is one of the most popular characters in the Naruto series. He is known for being a skilled ninja, as well as his END_OF_DOCUMENT_TOKEN_TO_BE_REPLACED

Might Guy is one of the most entertaining characters in "Naruto Shippuden". He's always cracking jokes, and he's never afraid to speak his mind.In fact, END_OF_DOCUMENT_TOKEN_TO_BE_REPLACED

In the anime series Naruto, there is one character who always stands out to me and that is Gaara. He is a complex character with END_OF_DOCUMENT_TOKEN_TO_BE_REPLACED

Fruits Basket is a Japanese manga series originally serialized in a magazine called Hana to Yume from 1998 to 2006. It follows the Sohma family END_OF_DOCUMENT_TOKEN_TO_BE_REPLACED