If you're looking for some words of wisdom to help you live your life to the fullest, here are some Spice and Wolf quotes for you.

This anime is packed with inspiring quotes that will motivate you to chase your dreams and be the best person you can be. 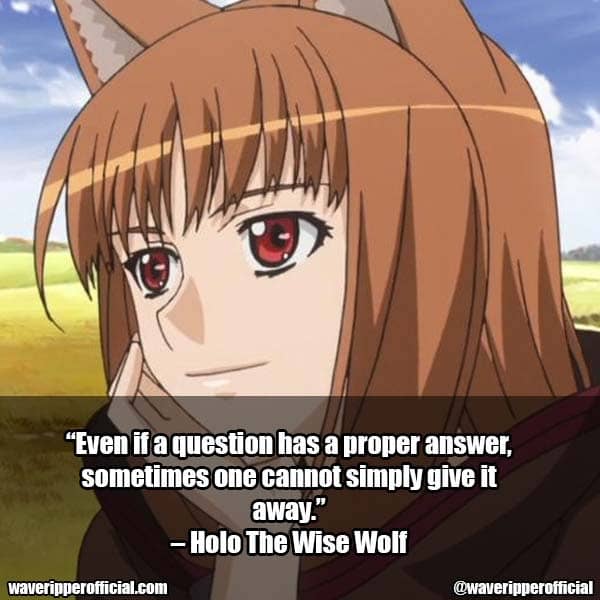 “Even if a question has a proper answer, sometimes one cannot simply give it away.” – Holo The Wise Wolf

“One can hardly lose what one does not already have.” – Holo The Wise Wolf

“When the time comes, I may need to borrow your chest to cry upon. That’s one promise I’ll need from you.” – Holo The Wise Wolf

“When you are experienced you can become overly confident and such confidence can prove fatal.” – Holo The Wise Wolf

“Though possessing two eyes, most creatures can see but a single thing at a time.” – Holo The Wise Wolf

Holo Quotes on Lying and Self-Improvement

“When a person lies, what is important is not the lie itself. No, it is their reason. Their why.” – Holo The Wise Wolf

“If you're looking at a single withered tree, it can seem like a big wound to the forest. But from the forest's perspective, that tree's remains will nourish other plants, acting for the good of the whole forest. If you change your perspective, a situation right in front of you, can reverse itself.” – Holo The Wise Wolf

“Stop pouting! You learned something valuable. Remember the lesson, not the disappointment. ” – Holo The Wise Wolf

“Once you taste poison, you might as well finish the meal. If it comes to that you would make as fine a dish as any.” – Holo The Wise Wolf

“Loneliness is a sickness that leads to death.” – Holo The Wise Wolf

“I have no fear of watching you grow old while I remain young. You know, I’ll even watch you on your death bed. I am no stranger to death. But your heart is like that of an innocent child. It has always accepted everything about me, without hesitation. Because of that I am very afraid.” – Holo The Wise Wolf

“No matter the journey, when you come to a fork in the road, you must decide in an instant which path to take.” – Holo The Wise Wolf

“I want you to please understand the scales of my heart will always be swaying back and forth. But there is something you should know. I will never lean to one side or the other due to the weight of gold coins.” – Holo The Wise Wolf

“We are both merchants. And I’ll promise you one thing. We will not laugh until we get the money, and we will not cry until we go bankrupt. And guess what? We are going to laugh.” – Kraft Lawrence

“If I got angry at every little thing, my body wouldn’t be able to hold it all.” – Kraft Lawrence

“The important thing is to think of something nobody else is thinking of. “Ignorance is a sin” is not about knowledge – it’s about wisdom.” – Kraft Lawrence

“There are many different ways to solve a problem. But once it’s solved, we must live our lives. Which means we should choose not the simplest solution, but the one that will allow us to feel the most at peace once it’s done.” – Kraft Lawrence

Lawrence Thoughts on Living to the Fullest

“A traveler does not leave regret behind in a village, but good memories.” – Kraft Lawrence

“We do not live in a fairy-tale world. Still, we cannot simply take revenge on those who have betrayed us and say “the end”. We have to live on after this. And taking revenge for betrayal only invites more revenge.” – Kraft Lawrence

“Profit could warm his coin purse, but never his back.” – Kraft Lawrence

“In life, it’s better to assume that bad things will happen to you rather than good things. You can’t look at someone else’s success and assume that it will happen to you. There are a lot of people in the world, so it makes sense that one or two of them are going to be fortunate. But there’s only one of you. Assuming that good fortune will come to you is no different than pointing a finger at a random person and predicting the same for them. But do you think that prediction would come true?” – Kraft Lawrence

That’s all for now, but be sure to come back for more anime quotes in the future! In the meantime, let me know which of these Spice and Wolf quotes is your favorite.

Do you have a favorite quote that wasn’t included in this post? Share it in the comments below!

If you're a fan of Goblin Slayer, then you know that the show can be pretty dark and violent. But it's also full of inspiring END_OF_DOCUMENT_TOKEN_TO_BE_REPLACED

In One Piece, there are many memorable quotes from the different characters. Whether they are funny, inspiring, or heartbreaking, these quotes stay with you long END_OF_DOCUMENT_TOKEN_TO_BE_REPLACED

Kakashi Hatake is one of the most popular characters in the Naruto series. He is known for being a skilled ninja, as well as his END_OF_DOCUMENT_TOKEN_TO_BE_REPLACED

Might Guy is one of the most entertaining characters in "Naruto Shippuden". He's always cracking jokes, and he's never afraid to speak his mind.In fact, END_OF_DOCUMENT_TOKEN_TO_BE_REPLACED

In the anime series Naruto, there is one character who always stands out to me and that is Gaara. He is a complex character with END_OF_DOCUMENT_TOKEN_TO_BE_REPLACED

Fruits Basket is a Japanese manga series originally serialized in a magazine called Hana to Yume from 1998 to 2006. It follows the Sohma family END_OF_DOCUMENT_TOKEN_TO_BE_REPLACED