If you're an anime fan, you've probably watched Darling In The Franxx by now.

And if you have, then you know how great the dialogue and writing are in the show!

These quotes are some of my favorite gems from the series so far. Enjoy!

17 Of The Best Darling In The Franxx Quotes 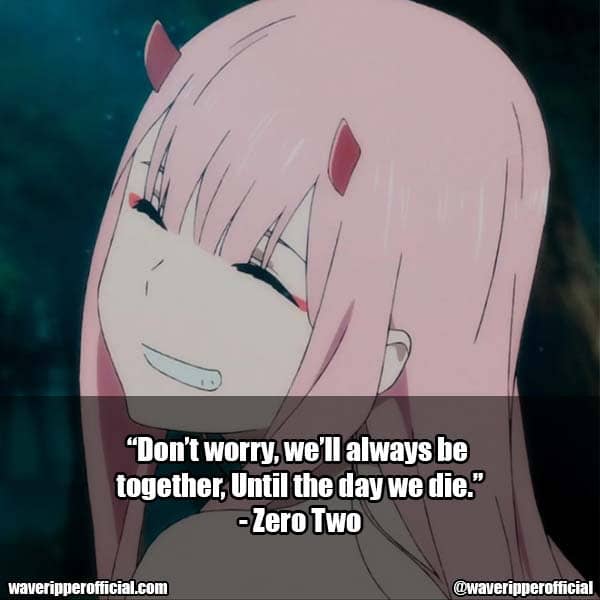 “Don’t worry, we’ll always be together, Until the day we die.”- Zero Two

“The Jian, also known as “the bird that shares wings,” only possesses one wing. Unless a male and female pair lean on each other and act as one, they’re incapable of flight. They’re imperfect, incomplete creatures. But, for some reason, their way of life, struck me as profoundly beautiful. It was beautiful, I felt.” - Zero Two

“If you have anything you wanna say, you better spit it out while you can. Because you’re all going to die sooner or later.”- Zero Two

“A kiss is something you share with your special someone. Is the one you kissed special to you?”- Zero Two

“I think I have taken a liking to you. Won’t you be my darling?” – Zero Two

“The leaving something behind part. My body can't do that. It's wonderful. You're all wonderful. You have the ability to decide your futures with your own hearts.” - Zero Two

“It’s been a long time since I last saw a human cry.” – Zero Two

“Once we die, we’ll only be a statistic. It won’t matter what we were called.” – Zero Two

“If I look up, I see thousands of lives shining deep in the sky. So far away and although I try, I just can't reach out. Yet, even with broken wings, we'll fly away once again. For the promise we must keep. For the future we must pass on.” - Mitsuru

“In the past, having a baby was the most natural thing.” - Kokoro

Hiro Quotes From Darling In The Franxx

“When we first met, I couldn’t take my eyes off you. You were confident, held your head high, and I found that beautiful.” – Hiro

“Getting mocked for my lack of a partner would be one thing. But the fact that there was still a part of me that still hoped for one made me feel pathetic.” - Hiro

“My wings exist for you. I’m your partner. I'm not going to leave you alone.” - Hiro

“I can feel myself going deeper inside of you. I can’t tell where I end and you begin anymore…. but I love it!” - Hiro

“I don’t know why, but the warm touch of her lips made my heart race.” – Hiro

“I've never directly spoken with an adult. But they are always looking after us. If we do our best, they praise us and even give us rewards. If I continue fighting for them, I'm sure that someday I can also become an adult. I've been dreaming forever for this day to come.” - Zorome

If you're an anime fan, then chances are that you've watched Darling In The Franxx by now. And if so, I bet you can relate to my favorite quotes from the series so far!

These gems will give any viewer a good laugh and show just how great dialogue and writing is in this hit anime. What's your favorite quote? Let me know down below!

If you’re an anime fan, chances are you know about the popular series Vampire Knight. It follows a young girl named Yuuki as she navigates END_OF_DOCUMENT_TOKEN_TO_BE_REPLACED

Tokyo Revengers is an anime series that is full of quotable moments. Each episode leaves you thinking about life in a different way. Here are END_OF_DOCUMENT_TOKEN_TO_BE_REPLACED

Are you an anime fan looking for inspiring words? You've come to the right place! Classroom of the Elite is a unique manga that provides END_OF_DOCUMENT_TOKEN_TO_BE_REPLACED

Anime fans around the world know about Chainsaw Man. The series has a huge following, and for good reason! The anime is packed with action, END_OF_DOCUMENT_TOKEN_TO_BE_REPLACED