26 Psycho Pass Quotes That Will Make You Sound Intellectual

One of the most engaging and dark anime out there, Psycho Pass is a show that keeps you hooked with its deep messages about humanity’s future and moral dilemmas in our current society.

Not only does it have a great storyline but also very good quotes worth mentioning - here are 26 of them! 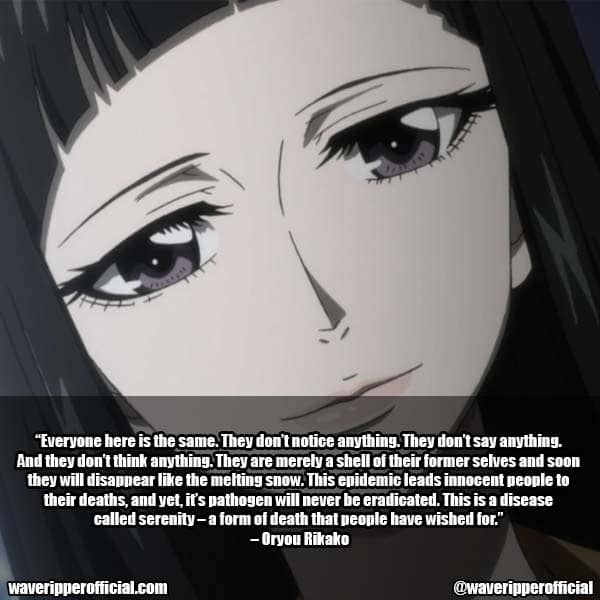 “Everyone here is the same. They don’t notice anything. They don’t say anything. And they don’t think anything. They are merely a shell of their former selves and soon they will disappear like the melting snow. This epidemic leads innocent people to their deaths, and yet, it’s pathogen will never be eradicated. This is a disease called serenity – a form of death that people have wished for.” – Oryou Rikako

“I think the only time people really have value is when they act according to their own will.” – Shogo Makishima

“The opposite of boredom is not pleasure… but excitement. People will gladly seek out any kind of excitement, even pain.” – Shogo Makishima

“Books are not something that you just read words in. They’re also a tool to adjust your senses.” – Shogo Makishima

“In order to measure a person’s worth, you must do more than push them. The real way to test their worth is to give them power. When they gain the freedom to act outside the boundaries of law and ethics, you can sometimes see their souls.” – Shogo Makishima

“What are human's desires? What I think the most troublesome desire is the desire for attention. It’s the source of jealousy and relationship problems, too.” – Shogo Makishima

“For some time researchers have understood that moderate stress has beneficial effects. It boosts the immune system for example. Stress motivates and prepares us for action. It compels our body to survive.” – Shogo Makishima

“I just long for a world in which ordinary things are done in an ordinary way.” – Shogo Makishima

“You disappointed me. So I have to give you a punishment. Regret your helplessness and feel despair.” – Shogo Makishima

“I want to see the splendor of people’s souls.” – Shogo Makishima

“An unforeseen situation… An unexpected turn of events… In the face of those, you too will face your true self.” – Shogo Makishima

“Beautiful flowers, too, eventually wither and fall. That’s the fate of all living beings.” – Shogo Makishima

“You disappointed me. So I have to give you a punishment. Regret your helplessness and feel despair.” – Shogo Makishima

“When you entrust so much of your everyday life to those electronic devices, the argument that you aren't a cyborg isn’t very convincing.” – Toyohisa Senguji

“Everything you’ve been taught is based on theories and logic. Soon, you’ll come to realize how pointless they are.” – Tomomi Masaoka

“It is not society that determines people’s futures. It is people who determine society’s future.” – Akane Tsunemori

“It’s not the final judgment of “good” and “evil” that’s important. What matters is that you come to that decision yourself. That you agonize over it and eventually accept it.” – Akane Tsunemori

“The law doesn’t protect people. People protect the law. People have always detested evil and sought out a righteous way of living. Their feelings, the accumulation of those peoples feelings are the law. They’re neither the provisions nor the system. They’re the fragile and irreplaceable feelings that everyone carries in their hearts.” – Akane Tsunemori

“It’s not the final judgement of “good” and “evil” that’s important. What matters is that you come to that decision yourself. That you agonize over it and eventually accept it.” – Akane Tsunemori

“When something impossible happens, there are only two possibilities. Either your assumptions are wrong, or you have gone crazy.” - Shinya Kogami

“I’m sorry. I couldn’t keep my promise. I wanted to go into a line of work where I could protect people. That’s why I became a detective. But Makishima changed everything. That man will continue to kill people. And yet, the law can’t judge him. As long as I’m a detective, I can’t touch him. This case made me aware… that the law can’t protect people.” – Shinya Kogami

“There’s a limit to the amount of pleasure a person can obtain. But pleasure brought out by intellect is infinite.” – Kouzaburou Touma

“They say that fools learn from their experiences, while the wise learn from history. I hope you’re not a fool.” – Nobuchika Ginoza

“Charisma has three points. The nature of a hero or prophet, the ability to simply make you feel good when you’re around them, and the intelligence to eloquently talk about all sorts of things,” – Saiga Jouji

Psycho Pass is a show that will make you think about the future of humanity and what it means to be human.

Which Psycho Pass quote is your favorite, let me know in the comments below!

35 Of The Most Dark Anime Series That Will Amaze You

If you’re an anime fan, chances are you know about the popular series Vampire Knight. It follows a young girl named Yuuki as she navigates END_OF_DOCUMENT_TOKEN_TO_BE_REPLACED

Anime fans are sure to be familiar with the many anime girls that rock black hair. From the mysterious and dangerous-looking anime girl in an END_OF_DOCUMENT_TOKEN_TO_BE_REPLACED

Anime characters with tattoos can often tell a story and add depth to the character’s motivations and feelings. Whether they are intricate designs or small END_OF_DOCUMENT_TOKEN_TO_BE_REPLACED

Calling all anime fans! Are you ready to jump into a hot and heavy debate about the hottest Chainsaw Man female characters? Whether you're new END_OF_DOCUMENT_TOKEN_TO_BE_REPLACED

Tokyo Revengers is an anime series that is full of quotable moments. Each episode leaves you thinking about life in a different way. Here are END_OF_DOCUMENT_TOKEN_TO_BE_REPLACED

Are you an anime fan looking for inspiring words? You've come to the right place! Classroom of the Elite is a unique manga that provides END_OF_DOCUMENT_TOKEN_TO_BE_REPLACED