13+ Of The Best Maid Sama Quotes for Anime Fans

Maid Sama is one of the most popular Anime shows out there. If you're a fan, you'll love these Maid Sama quotes!

They're funny, romantic, and will make you want to watch the show all over again. 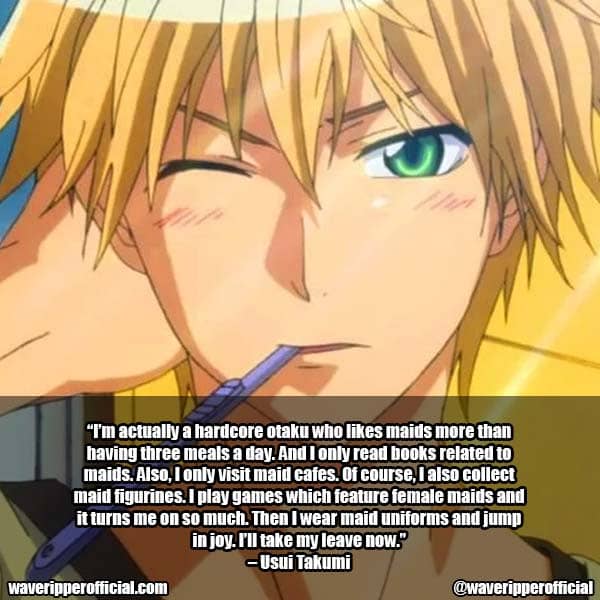 “I’m actually a hardcore otaku who likes maids more than having three meals a day. And I only read books related to maids. Also, I only visit maid cafes. Of course, I also collect maid figurines. I play games which feature female maids and it turns me on so much. Then I wear maid uniforms and jump in joy. I’ll take my leave now.” – Usui Takumi

“Your sudden smiles always surprise me. But are dangerous enough to make my heart race.” – Usui Takumi

“Love, passion, why do we get caught up by such troublesome feelings? The mind couldn’t ever get things straight, and you lose control to know what is sensible. Deep down it’s all so vexing.” – Usui Takumi

“Ayuzawa, you are the first person ever to appear in my life and able to make me a mess.” – Usui Takumi

“That’s exactly the way it should be. Doing only unexpected things, otherwise, I’ll lose my reputation as a perverted outer-space human.” – Usui Takumi

“I don't want others to hear the words that I've been waiting anxiously for. You know, I want to be the only one to hear them.” – Usui Takumi

“It’s okay, no need to thank me or say anything else. I will always be there for you, and I will make you fall for me over and over again.” – Usui Takumi

“Words won't be enough to describe it. The feeling of love keeps flowing out from everywhere. Even if everyone’s against it, or even if you know that you shouldn’t. But once you’ve noticed this feeling, you won’t be able to stop it anymore.” – Sakura Hanazono

“I really don’t get it. Why don’t you tell her how you feel if you care for her so much? And, why would you lie like that and keep yourself from pursuing her?” – Soutarou Kanou

“I dont know much about you. You were the one who selfishly entered my world, yet you immediately plugged into silence. What were you thinking? Did you really pick on me just because its fun? Which one of it is serious and which one of it is just a joke? That's enough now, making me all messed up like this.” - Misaki Ayuzawa

“Why is my heart beating so fast? And, why do I feel lonely when you leave me? Why are you the only one causing me so much confusion?” – Misaki Ayuzawa

“Never show your stupid self in public.” – Kanade Maki

That’s all for today! I hope you enjoyed these quotes. Which one is your favorite? Let me know in the comment below!

And if you haven’t seen the show yet, what are you waiting for? It’s a hilarious and romantic ride from start to finish. Thanks for reading!

If you're a fan of Goblin Slayer, then you know that the show can be pretty dark and violent. But it's also full of inspiring END_OF_DOCUMENT_TOKEN_TO_BE_REPLACED

In One Piece, there are many memorable quotes from the different characters. Whether they are funny, inspiring, or heartbreaking, these quotes stay with you long END_OF_DOCUMENT_TOKEN_TO_BE_REPLACED

Kakashi Hatake is one of the most popular characters in the Naruto series. He is known for being a skilled ninja, as well as his END_OF_DOCUMENT_TOKEN_TO_BE_REPLACED

Might Guy is one of the most entertaining characters in "Naruto Shippuden". He's always cracking jokes, and he's never afraid to speak his mind.In fact, END_OF_DOCUMENT_TOKEN_TO_BE_REPLACED