Top 22 Berserk Quotes to Help You Unleash Your Inner Beast

When you feel like you're backed into a corner, when all seems lost, it's time to unleash your inner berserk.

These 22 quotes will help get you in the right frame of mind and show you that berserks are made of sterner stuff!

22 Of The Best Berserk Quotes 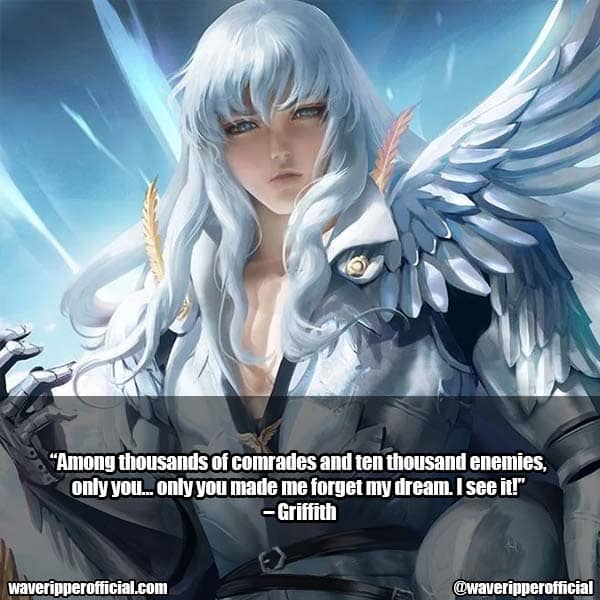 “Among thousands of comrades and ten thousand enemies, only you… only you made me forget my dream. I see it!” – Griffith

“Judging by the way you fight, it seems you value victory more than your own life.” - Griffith

“While many can pursue their dreams in solitude, other dreams are like great storms blowing hundreds, even thousands of dreams apart in their wake. Dreams breathe life into men and can cage them in suffering. Men live and die by their dreams. But long after they have been abandoned they still smolder deep in men’s hearts. Some see nothing more than life and death. They are dead, for they have no dreams.” – Griffith

“It is my perception, that a true friend never relies on another’s dream. A person with the potential to be my true friend, must be able to find his reason for life without my help. And, he would have to put his heart and soul into protecting his dream. He would never hesitate to fight for his dream, even against me. For me, a true friend is one who stands equal on those terms..” – Griffth

“A friend would not just follow another’s dream because a friend would find his own reason to live.” – Griffith

“I feel no responsibility to comrades who’ve lost lives under my command. Because they chose to fight in each battle... Just as I chose this. But if there is something that… I can do for them. Something I can do for the dead… Then it is to win! I must keep winning to attain my dream. The same one they clung to, and risked their lives for!! To realize my dream, I will perch on top of their corpses... It is a blood-smeared dream, after all. I don’t regret or feel guilty about it... But to risk thousands of lives while never getting myself dirty. It’s not a dream that can be so easily realized!” – Griffith

“Hate is a place, where a man who can’t stand sadness goes.” – Godo

“Whether it’s good or bad, it’s so unfortunate to wake up during a dream.” – Judeau

“If you think this man your friend, then know this. When you regard one another as brother and this man's ambition crumbles, it is your destiny to face your death. You cannot escape your fate!” - Nosferatu Zodd

“No matter how strong, for a human to fight a monster means he has submerged his humanity and transformed himself into a greater monster.” – Schierke

“If you’re alone or if it’s just your life, you can use it however you please/ Wear yourself out, get cut to ribbons, doesn’t matter. But when there’s two, the blade grows heavy. Fighting like death doesn’t concern you becomes a thing of the past. It’s no longer just you. I threw away my way of life, relied on the strength of others, and somehow pushed on.” – Guts

“The reward for ambition too great… is self destruction.” – Guts

“Perhaps, this is what I was looking for my whole life. I didn't realize it until this very moment, but everything I wanted back then is right here before me now. Why don't I ever realize what I have until it's lost to me?” - Guts

“I will never draw my sword for another man again, or be dangled by another man's dream. From now on, I will fight my own battles.”- Guts

“In the end the winner is still the last man standing.” – Guts

“If you’re always worried about crushing the ants beneath you… you won’t be able to walk.”- Guts

“People bring the small flames of their wishes together… since they don’t want to extinguish the small flame… they’ll bring that small flame to a bigger fire. A big flame named Griffith. But you know, I didn’t bring a flame with me. I think I just stopped by to warm myself by the bonfire.” – Guts

“I don't know if this is the answer I've been looking for all my life, but for now I swear my life and my sword to him.”- Guts

“You’re going to be all right. You just stumbled over a stone in the road. It means nothing. Your goal lies far beyond this. Doesn’t it? I’m sure you’ll overcome this. You’ll walk again… soon.” – Guts

“Look, look around carefully. Strain your eyes. At the darkness around us… At the darkness… around me. You said, “anywhere but here”. This is where. Here at the border. Gathered by the winds. Those who’ve met their final destiny hanging between jealousy and regret and those who failed, swept together here. You say “It doesn’t matter where”. If you follow me, this is where you’ll go! This is your Eden! You run from it. It is no Eden. If you follow me… to this place… the entire world… is a battlefield.” – Guts

“You’re right, we are mortal and fragile. But even if we are tortured or wounded, we’ll fight to survive. You should feel the pain we feel and understand. I am the messenger that will deliver you to that pain and understanding.” – Guts

“At last, it's goodbye to the humble mercenary life. We've been formally admitted into the King's army.”- Corkus

So the next time you feel like giving up, remember your inner berserk and pull out one of these quotes to help get yourself fired up.

It’s time to show your enemies (and life in general) who’s boss! Which of these 22 Berserk quotes is your favorite?

20 Psycho Pass Quotes That Will Make You Sound Intellectual

If you're a fan of Goblin Slayer, then you know that the show can be pretty dark and violent. But it's also full of inspiring END_OF_DOCUMENT_TOKEN_TO_BE_REPLACED

In One Piece, there are many memorable quotes from the different characters. Whether they are funny, inspiring, or heartbreaking, these quotes stay with you long END_OF_DOCUMENT_TOKEN_TO_BE_REPLACED

Kakashi Hatake is one of the most popular characters in the Naruto series. He is known for being a skilled ninja, as well as his END_OF_DOCUMENT_TOKEN_TO_BE_REPLACED

Might Guy is one of the most entertaining characters in "Naruto Shippuden". He's always cracking jokes, and he's never afraid to speak his mind.In fact, END_OF_DOCUMENT_TOKEN_TO_BE_REPLACED

In the anime series Naruto, there is one character who always stands out to me and that is Gaara. He is a complex character with END_OF_DOCUMENT_TOKEN_TO_BE_REPLACED

Fruits Basket is a Japanese manga series originally serialized in a magazine called Hana to Yume from 1998 to 2006. It follows the Sohma family END_OF_DOCUMENT_TOKEN_TO_BE_REPLACED