Some people say that green eyes are the most beautiful eyes color both in real life and in anime series.

If you're an anime fan, then you know that green eyes are mesmerizing on a character. Here is a list of 20 anime characters with green eyes. 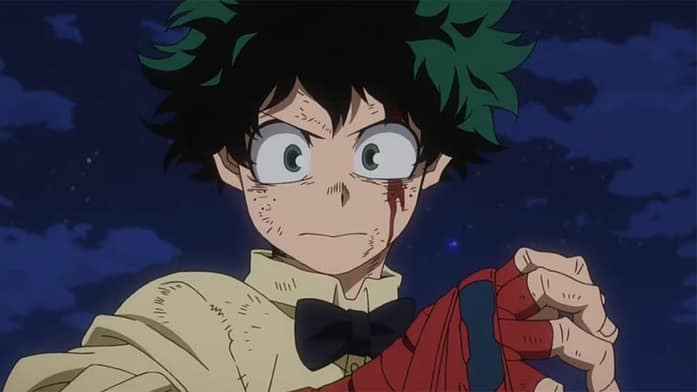 Because of this matchy-matchy theme, many fans compared him to the vegetable broccoli. In the anime, Izuku’s superhero name is Deku.

One of the things that makes Izuku so endearing to his friend is his passion of writing notes about everything. This attention to detail comes in handy when he finally gets his own Quirk, One for All.

Naofumi is a young man sporting black hair and green eyes. He wakes up transported to a new and different world where he becomes one of the world's saviors.

But, he quickly discovers that this journey is going to be a hard one. After being betrayed, Naofumi's life becomes difficult. He must start again, with nothing but his shield.

The Rising of Shield Hero follows Naofumi's story as he meets new friends and faces his demons.

Makoto Tachibana is the free-spirited backstroke swimmer of the famed Iwatobi Swim Club. As the former captain of the club, Makoto has always been a reliable and dependable presence within the team.

His easygoing and carefree personality helped to keep the team morale high, even in the face of tough competition. However, Makoto is more than just a good swimmer. He is considerate of the welfare of others.

Black Clover follows a group of young mages as they do all they can to become the next Wizard King. One of the main characters is Asta, a teenage boy with black hair and light green eyes.

While Asta is not the strongest mage in the series, he more than makes up for it with his determination and never-give-up attitude.

In the vampire knight anime series, Lelouch and Suzaku are as different as night and day, despite being best friends.

While Lelouch has purple eyes, Suzaku has green, and his hair is brown. At first, this young man is selfish and has a bratty attitude. But his father's death has changed his attitude a lot.

In the series, Suzaku and Lelouch are best friends although the former hates the latter during their first encounter.

Yuichiro Hyakuya has gone through a lot since childhood. He witnessed the death of his family and friends at their hands. So, he was determined to get revenge.

When he met Mikaela Hyakuya, he thought he had found a kindred spirit. But Mikaela becomes a vampire, and Yuichiro was left alone again. This made him more determined.

However, he soon discovers that he has a secret power that he can use to take humanity back from the vampires.

Takuma belongs to an aristocratic family of vampires. In the series, he’s a bookshop owner. At school, he's the vice president of the student council. His closest friend is Kaname Kuran, having spent more than 10 years with him.

He has blond hair and soulful green eyes, which is the common eye color for vampires besides the gray color. Takuma is an expert in handling Katana. Unlike other vampires in the anime, he is cheerful and enthusiastic.

Mizuki is a land god in the popular manga and anime Kamisama Kiss. He is pure-hearted and innocent, and shows a strong interest in the human world, particularly in candied apples and ice cream.

In his white snake form, Mizuki can explore places freely and control water. He can also summon white snakes to do his bidding.

This green-eyed cutie uses a sacred artifact that allows him to travel back to the past.

Shippo is a little fox demon with a big heart. He's been through a lot in his life, losing his family and being on the run from danger. But he's never given up hope.

He's always looking for ways to use his fox magic to help others and make new friends. Together with Inuyasha and the rest of their ragtag group, Shippo goes on adventures and learns more about what it means to be a family.

Miya Chinen looks like a cat. For starters, his eyes are shaped like that of a cat's. Their color is a rich green, which mainly associated with cats.

He's can do complicated tricks in skating events that require a lot of balance and proper coordination.

A closer look reveals that Anya Forger is anything but ordinary. With bright green eyes and pink hair, Anya stands out in the crowd.

She can hear what is in your mind. Awesome right? Anya is also the adopted daughter of Loid, a spy who lives a double life.

As such, she has first-hand experiences in a world of intrigue and risks.

This anime girl from Naruto Shippuden is a kunoichi with light green eyes (and surprisingly, one of the most hated characters in the anime community). She's often portrayed as being kind and empathetic to others.

Her character is a stereotype commonly associated with people who have green eyes. However, Sakura can also be irritable and prone to jealousy.

In many ways, she's a reflection of the positive and negative stereotypes often assigned to people with green eyes.

Chise Hatori is the female protagonist of Ancient Magus Bride. Although at first glance she may seem sweet and innocent, Hatori is actually quite strong-willed and determined.

She always does her best, regardless of the tasks at hand. Her red hair is a symbol of her strength and passion, and it often catches people by surprise.

Hatori is also fiercely loyal to those she cares about, and she will go to great lengths to protect them.

Maka Albarn is a student at the DWMA (Death Weapon Meister Academy), and the lead protagonist in the anime/manga series Soul Eater.

She's not as strong as her fellow Meisters. She often lets her emotions get the better of her. However, these flaws make Maka such a compelling character.

Over the course of the series, we see her grow from a hot-headed teenager into a fierce and confident warrior.

Emma's never-say-die attitude makes her such a lovable character. No matter what obstacles are in her path, she promises never to give up.

Even when the demons come for her, she is always putting herself in danger to save her friends. It's this kind of optimism and courage that earned her the nickname "Energizer" from those closest to her.

And it's also why people with green eyes are generally regarded as being full of life and vigor.

This teenage girl loves nothing more than spending her time playing video games and watching anime. This might not sound like much, but to Konata it's everything.

It's her passion, and it's what makes her happy. lucky star is often described as a "slice-of-life" anime because it follows the everyday lives of Konata and her friends.

Makoto Kino is the sailor soldier of power and courage, Sailor Jupiter! As a civilian, Makoto is a tall and fierce-looking schoolgirl, which intimidates most people.

But she is a gentle soul. She was once believed to have been kicked out of her previous school because of fighting, but in reality, she was just defending someone

This anime character is a natural protector and will go to great lengths to make sure her loved ones are safe.

Fubuki also has striking green eyes and chin-length hair. She is the younger sister of Tatsumaki. Despite her beautiful and curvy appearance, she’s self-conscious about it.

In the series, this young woman is popular for her title as Blizzard of Hell. She’s a Class B Rank hero and is trying to recruit Saitama into her group.

Like her cute sister, Fubuki is a pushover when it comes to her status in B-Class. She doesn’t like to take no.

Shirayuki has striking red hair. While her hair color is what initially caught the eye of Prince Zen, it's her hard-working nature and determination that earned his admiration.

This pretty girl cuts her hair short in an effort to escape the unwanted attention she received because of it, but finds that even with shorter hair, she still can't blend in.

Despite the judgment and hate she sometimes faces, Shirayuki continues to work hard and be herself.

Cardcaptor Sakura is a popular anime character known for her bubbly personality and magical card-collecting abilities. Though she may look like a normal girl, this cheerful person is tasked with collecting dangerous cards that have been scattered across the world.

Luckily, Sakura is up for the challenge, thanks to her friendly and sociable nature. No matter who you are, Sakura is sure to make friends with you in no time.

I hope you like my list of anime characters with green eyes. Who is your favorite from the anime girls and male characters? Don't forget to comment below.

Tokyo Ghoul is a dark, gritty anime that tells the story of END_OF_DOCUMENT_TOKEN_TO_BE_REPLACED

Fans are no strangers to anime characters with purple eyes. Though it's END_OF_DOCUMENT_TOKEN_TO_BE_REPLACED

We all know that anime is full of beautiful characters. But sometimes, END_OF_DOCUMENT_TOKEN_TO_BE_REPLACED

Eyes are considered the windows to the soul, so it's no wonder END_OF_DOCUMENT_TOKEN_TO_BE_REPLACED