Might Guy is one of the most entertaining characters in "Naruto Shippuden". He's always cracking jokes, and he's never afraid to speak his mind.

In fact, he's said some pretty hilarious things over the years. Here are some of our favorite Might Guy quotes from "Naruto Shippuden"! 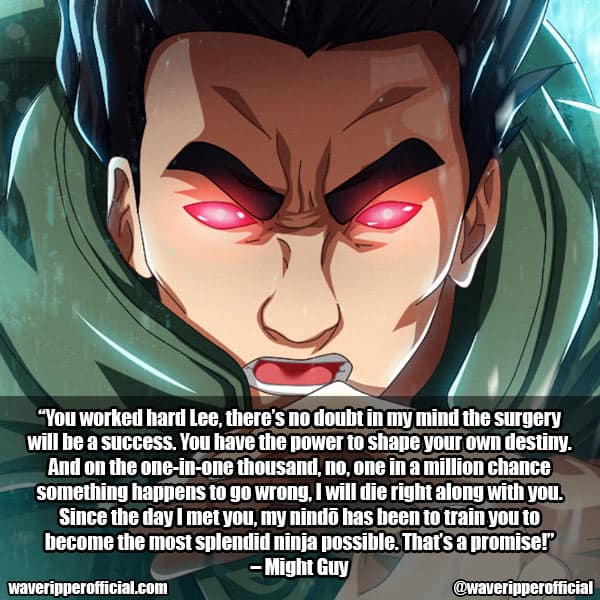 “You worked hard Lee, there’s no doubt in my mind the surgery will be a success. You have the power to shape your own destiny. And on the one-in-one thousand, no, one in a million chance something happens to go wrong, I will die right along with you. Since the day I met you, my nindō has been to train you to become the most splendid ninja possible. That’s a promise!” – Might Guy

“I was a failure when I was your age, but now I can even beat Kakashi, the elite genius. It’s only a matter of time until Lee finally surpasses you!” – Might Guy

“For those who don’t believe in themselves… hard work is worthless!! …You are very much like me, Lee. I used to be a loser too. But these days, I can even win against the elite genius Kakashi.”I want to prove that even without ninjutsu and genjutsu I can become a great ninja” that’s your nindo right? That’s a great goal, it’s worth working hard for!” – Might Guy

“He was a worthy opponent! A man who lived and died like a real shinobi! Kisame Hoshigaki! I’ll remember that name for the rest of my life!” – Might Guy

“A failure will win even at the cost of their own life!” – Might Guy

“If you want to be free from your suffering, make up your mind. If you give up on your dream, you will suffer more.” – Might Guy

“You have the gift of perseverance, and that’s what makes you a genius too!” Might Guy

“People call me the Leaf’s Noble Gentleman!” – Might Guy

“Don’t let anything stir you up the path you have drawn for yourself! Forge ahead in the end! Stick to it Lee! Make me proud! Be everything you can be!” – Might Guy

“Look deep into my eyes and accept my sincere apology! Also notice my handsome manly features.” – Might Guy

“That may be true… but they don’t just rot and die. They will become nourishment for the new, fresh leaves. The time when a new spring comes and the fresh leaves bud… is the peak of youth!! It’s the time to burn, deep crimson!8th Gate of Death Open!!!” – Might Guy

“It’s true that you’re different from Neji… You’re not a genius in ninjutsu nor genjutsu, not even taijutsu… But you know what Lee? You are a genius that has the strength and potential within himself to surpass Neji… …Because you are… a genius of hard work.” – Might Guy

“It’s not always possible to do what we want to do, but it’s important to believe in something before you actually do it.” – Might Guy

Might Guy believes that anyone has the potential to become a great ninja if they just have the will to succeed. Guy's catchphrase is "I'm going to break through my limits!"

According to Masashi Kishimoto, Might Guy's passionate personality is based on his junior high teacher. But, the overall personality of this character is not similar to the teacher. Some say it's based on Bruce Lee or maybe even Jackie Chan.

Might Guy is renowned for his taijutsu skills and is one of the few ninjas who can use the Eight Inner Gates. This technique makes him one of the strongest Naruto characters.

So, Might Guy may not be the strongest but definitely one of the most powerful characters in the series. Besides his power, his personality is super endearing. Comment below your favorite quote from Might Guy.

If you're a fan of Goblin Slayer, then you know that the show can be pretty dark and violent. But it's also full of inspiring END_OF_DOCUMENT_TOKEN_TO_BE_REPLACED

In One Piece, there are many memorable quotes from the different characters. Whether they are funny, inspiring, or heartbreaking, these quotes stay with you long END_OF_DOCUMENT_TOKEN_TO_BE_REPLACED

Kakashi Hatake is one of the most popular characters in the Naruto series. He is known for being a skilled ninja, as well as his END_OF_DOCUMENT_TOKEN_TO_BE_REPLACED

Might Guy is one of the most entertaining characters in "Naruto Shippuden". He's always cracking jokes, and he's never afraid to speak his mind.In fact, END_OF_DOCUMENT_TOKEN_TO_BE_REPLACED

In the anime series Naruto, there is one character who always stands out to me and that is Gaara. He is a complex character with END_OF_DOCUMENT_TOKEN_TO_BE_REPLACED

Fruits Basket is a Japanese manga series originally serialized in a magazine called Hana to Yume from 1998 to 2006. It follows the Sohma family END_OF_DOCUMENT_TOKEN_TO_BE_REPLACED