Life can be tough. But it's also beautiful. Kill La Kill is a great anime that shows us just how powerful we can be when we're fighting for what we believe in.

These Kill La Kill quotes will inspire you to take on the world and achieve your goals! 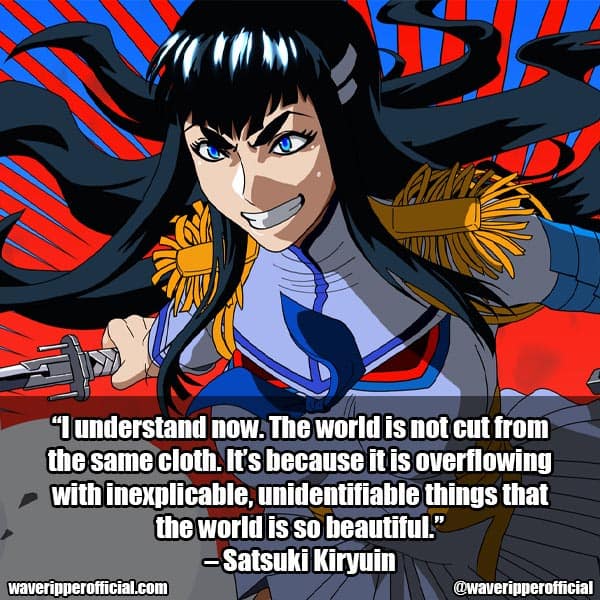 “I understand now. The world is not cut from the same cloth. It’s because it is overflowing with inexplicable, unidentifiable things that the world is so beautiful.” – Satsuki Kiryuin

“In the name of human liberation, your life is forfeit!” – Satsuki Kiryuin

“Those who lack resolve are incapable of even wiping away their own tears.” – Satsuki Kiryuin

“Fear is freedom. Subjugation is liberation. Contradiction is truth. These are the facts of this world. And you will all surrender to them, you pigs in human clothing!” – Satsuki Kiryuin

“It is we who shall pave the way to humanity’s future.” – Satsuki Kiryuin

“A skyscraper built within your mind will never fall down.” – Satsuki Kiryuin

“Ask not the sparrow how the eagle soars.” – Satsuki Kiryuin

“This is the form in which a Kamui is able to unleash the most power! The fact that you are embarrassed by the values of the masses only proves how small you are! If it means fulfilling her ambitions, Satsuki Kiryūin will show neither shame nor hesitation, even if she bares her breasts for all the world to see!” – Satsuki Kiryuin

“A castle that vanishes at the first gust of wind is worthless.” – Satsuki Kiryuin

“Fear is freedom. Subjugation is liberation. Contradiction is truth. These are the facts of this world. And you will all surrender to them, you pigs in human clothing!” – Satsuki Kiryuin

“This world is full of injustice! It’s a place where the strong trample the weak every day! That is the truth about the stupid human race!” – Rei Hououmaru

“Let me give you two useful pieces of information...” - Tsumugu Kinagase

“There comes a time when a girl outgrows her sailor uniform.” – Senketsu

“Hate and love are two sides of the same coin. It’s like a finely-tailored suit with a food sturdy stitching. In other words, the deeper the hatred, the deeper the love grows.” – Nui Harime

“To hell with your opinion. I’ll take my own path no matter what anyone else says.” – Ryuko Matoi

“I’m not the usual Ryuko Matoi right now. I’m a Ryuko Matoi who is fixated on seeing what she wants almost within reach.” – Ryuko Matoi

“I won’t sacrifice the lives of others to achieve my goal.” – Ryuko Matoi

“Nonsensical is our thing.” – Ryuko Matoi

“If you don’t try to win with everything you have, it’ll come back to bite you.” – Ryuko Matoi

“Blow it out your ass, bitch! It’s gonna take a hell of a lot more than you to stop me!” – Ryuko Matoi

“Humans have a will to live.” – Ryuko Matoi

“Just rip it off and get naked!” – Mako Mankanshoku

“And everyone on the planet knows that if you win with friendship, you win at life!” – Mako Mankanshoku

Why is it called Kill la Kill?

Kill la Kill is a Japanese anime television series that aired from 2013 to 2014. The title of the show comes from the fact that the two main characters, Ryuko Matoi and Satsuki Kiryuin, are constantly trying to kill each other.

However, the death toll is always quite low, as they usually end up just wounding each other. In fact, the only time anyone actually dies in Kill la Kill is when Ryuko kills Satsuki's father, Souichirou Kiryuin.

So, while the title may be a bit misleading, Kill la Kill is actually a pretty accurate description of what goes on in the show.

What does Kill la Kill talk about?

Kill La Kill is a pretty crazy show. It's about this girl, Ryuko Matoi, who's looking for her father's killer. She comes across this crazy outfit called "Scythe Meister" which allows her to transform into this powerful fighting machine.

She uses it to take on the evil forces that are trying to control the world. Along the way, she makes some friends and enemies and learns a lot about herself and the people around her. Kill La Kill is a really fun show with a lot of action, comedy, and heart.

If you're looking for something different, give it a try!

If you're a fan of Goblin Slayer, then you know that the show can be pretty dark and violent. But it's also full of inspiring END_OF_DOCUMENT_TOKEN_TO_BE_REPLACED

In One Piece, there are many memorable quotes from the different characters. Whether they are funny, inspiring, or heartbreaking, these quotes stay with you long END_OF_DOCUMENT_TOKEN_TO_BE_REPLACED

Kakashi Hatake is one of the most popular characters in the Naruto series. He is known for being a skilled ninja, as well as his END_OF_DOCUMENT_TOKEN_TO_BE_REPLACED

Might Guy is one of the most entertaining characters in "Naruto Shippuden". He's always cracking jokes, and he's never afraid to speak his mind.In fact, END_OF_DOCUMENT_TOKEN_TO_BE_REPLACED

In the anime series Naruto, there is one character who always stands out to me and that is Gaara. He is a complex character with END_OF_DOCUMENT_TOKEN_TO_BE_REPLACED

Fruits Basket is a Japanese manga series originally serialized in a magazine called Hana to Yume from 1998 to 2006. It follows the Sohma family END_OF_DOCUMENT_TOKEN_TO_BE_REPLACED