If you're a fan of Goblin Slayer, then you know that the show can be pretty dark and violent. But it's also full of inspiring quotes that will get you pumped up for battle!

Here are some of my favorite Goblin Slayer quotes to get you motivated. 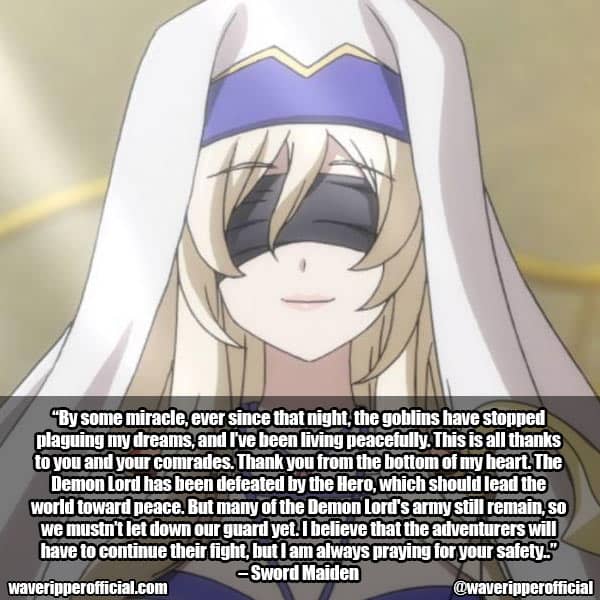 “By some miracle, ever since that night, the goblins have stopped plaguing my dreams, and I’ve been living peacefully. This is all thanks to you and your comrades. Thank you from the bottom of my heart. The Demon Lord has been defeated by the Hero, which should lead the world toward peace. But many of the Demon Lord's army still remain, so we mustn’t let down our guard yet. I believe that the adventurers will have to continue their fight, but I am always praying for your safety..” – Sword Maiden

“Ironic, don’t you think? To think that the messenger of the Supreme God should protect the city and the city alone.” – Sword Maiden

“You’re a kind person. When I tell most people, they just say, “I’m sorry.”  – Sword Maiden

“If you despise something you’ll become a goblin.” – Goblin Slayer’s Older Sister

“You have to protect girls.” – Goblin Slayer’s Older Sister

“If all you ever do is dwell on the things you don’t have, your heart and body warp into something unsightly. And you start trying to take things from others by force.” – Goblin Slayer’s Older Sister

“In the end, the only good goblins are the ones who don’t come out of their holes.” – Goblin Slayer

“A good goblin? I guess there might be one if you looked really hard.” – Goblin Slayer

“Think about how it would feel if your home was suddenly attacked by monsters… Yes, if your home was suddenly attacked by monsters one day. They act as though they own the place and kill your friends, kill your family, and plunder the rest of the village. Another example would be if your older sister was attacked, tormented, made a plaything, then killed… Let’s say that you witnessed all of this, from start to finish, in hiding as you held your breath… There’s no way you’d forgive them.” – Goblin Slayer

“They hold on to grudges for life. And the survivors of the nest learn from their mistakes and adapt. There isn’t a single reason to let them live.” – Goblin Slayer

“None of you have eaten yet? Correct. We promised, remember? That when we got through that battle, we’d enjoy a meal together.” – Goblin Slayer

“Yes, I’m frightened, but… I’m sure… I’m sure that everything will be all right.” – Onna Shinkan

“Not giving the other person a choice doesn’t really qualify as a discussion.” – Onna Shinkan

“Adventurers are supposed to be fun. The joy of experiencing the unknown and discovering new things. Feeling elated or accomplished. That’s what my adventurers are like. This is NO adventure. Someday, I’ll take you on an actual adventure.” – High Elf Archer

“An elf’s arrows hit their mark, even when their eyes are closed.” – High Elf Archer

“Justice is not about striking down evil. But making people aware that evil exists in the world.” – Inspector

“We’ll make them pay for what they did to her. I won’t leave here until they’re all dead.” – Dwarf Shaman

“We shouldn’t cause a commotion on enemy ground.” – Dwarf Shaman

“Guess I don’t have a choice. I don’t care for the Goblin Slayer, but there’s a reward involved.” – Heavy Warrior

“There’s nothing like a meal enjoyed together.” – Lizard Priest

“She will survive. Had the wound been any deeper, there would’ve been nothing I could do.” – Lizard Priest

“Let’s take our time thinking about the future, there’s no need to rush.” – Cow Girl

“People get old and get hurt. When they’re tired they collapse. Eventually, everyone reaches their limit. Whether it be an adventurer or a hero. Even if he doesn’t die. These days won’t last forever.” – Cow Girl

“He didn’t come back that day. Or the next day… I wonder if he’s still fighting.” – Cow Girl

“Luck, wisdom, and courage! It all begins with whether or not you’re going to do something. So do something!” – Burglar

“It’s your actions.. not your strength, that would lead you to victory.” – Burglar

“Anyone not confident in their skills, better bow out.” – Spearman

If you're ever feeling down, just remember these badass quotes from Goblin Slayer and you'll be ready to take on anything!

Thanks for following along with this post. I hope you found it as inspiring as I did.

Are there any other Goblin Slayer quotes that I missed? Let me know in the comments below and I'll add them to the list.

If you're a fan of Goblin Slayer, then you know that the show can be pretty dark and violent. But it's also full of inspiring END_OF_DOCUMENT_TOKEN_TO_BE_REPLACED

In One Piece, there are many memorable quotes from the different characters. Whether they are funny, inspiring, or heartbreaking, these quotes stay with you long END_OF_DOCUMENT_TOKEN_TO_BE_REPLACED

Kakashi Hatake is one of the most popular characters in the Naruto series. He is known for being a skilled ninja, as well as his END_OF_DOCUMENT_TOKEN_TO_BE_REPLACED

Might Guy is one of the most entertaining characters in "Naruto Shippuden". He's always cracking jokes, and he's never afraid to speak his mind.In fact, END_OF_DOCUMENT_TOKEN_TO_BE_REPLACED

In the anime series Naruto, there is one character who always stands out to me and that is Gaara. He is a complex character with END_OF_DOCUMENT_TOKEN_TO_BE_REPLACED

Fruits Basket is a Japanese manga series originally serialized in a magazine called Hana to Yume from 1998 to 2006. It follows the Sohma family END_OF_DOCUMENT_TOKEN_TO_BE_REPLACED