In the anime series Naruto, there is one character who always stands out to me and that is Gaara. He is a complex character with an interesting backstory, and his quotes are insightful and powerful.

In this blog post, we will take a look at 24 of the best quotes from Gaara in Naruto Shippuden. Without further ado, let's get started! 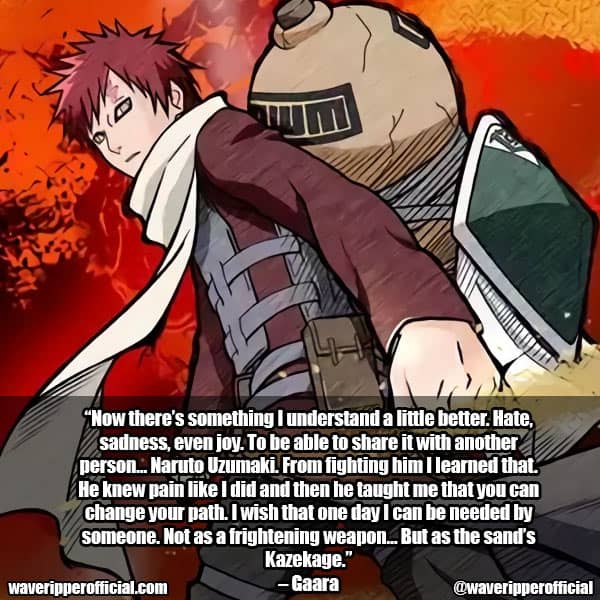 “Now there’s something I understand a little better. Hate, sadness, even joy. To be able to share it with another person… Naruto Uzumaki. From fighting him I learned that. He knew pain like I did and then he taught me that you can change your path. I wish that one day I can be needed by someone. Not as a frightening weapon… But as the sand’s Kazekage.” – Gaara

“Just because someone is important to you, it doesn’t necessarily mean that, that person is good. Even if you knew that person was evil… People cannot win against their loneliness.” – Gaara

“In order to escape a road of solitude, one has to work hard, and forge a new path with their own power.” – Gaara

“Naruto… Just so you know, there will be a war to protect the Eight-Tails and Nine-Tails. In other words – you. For the sake of the ninja world and as the Kazekage, I will guard you with my life. If as a member of Akatsuki, Sasuke Uchiha stands in the way of the ninja coalition… I will show him no mercy.” – Gaara

“Perhaps the companionship of an evil person is preferable to loneliness.” – Gaara

“Peace under an illusion is not true peace. It’s only meaningful if the real world manages to accomplish it.” – Gaara

“I am a relic they want to get rid of, so why do I exist and live? In order to exist you need a purpose, to exist for no reason is the same as being dead… I would love only myself and fight for only myself. If all other people exist to magnify that love, then there is no more a splendid universe than this one…” – Gaara

“You have the same eyes as I do…the eyes, filled with hatred and death, that long for strength… Just like mine. Your eyes tell me how badly you wish to kill the one who put you through the hell called loneliness.” – Gaara

“If love is just a word, then why does it hurt so much if you realize it isn’t there?” – Gaara

“I think of you as a friend. I used to think “friend” was just another word… Nothing more, nothing less. But when I met you, I realized what was important was the word’s meaning.” – Gaara

“You’re the same then. When you feel the honor of your idol under scrutiny… you become enraged, as if it were your own honor being questioned. The more precious your idol is to you… the harder you fight for him.” – Gaara

“I know him well. He takes too many risks when it comes to his friends…that’s why.” – Gaara

“Up until now, my bonds with others have only been ones of hatred and murder. But, seeing him fight so hard made me wonder what a bond really is. I think I understand a little now. Suffering, sadness…and joy. To be able to share it with another person. Naruto Uzumaki…when I fought him, I feel that is what he taught me.” – Gaara

“I want to be needed, this is what I’ve learned from meeting and fighting Uzumaki Naruto. ” – Gaara

“I finally understand… I’m alone. I won’t believe in anyone or love anyone. I’m alone.” – Gaara

“A soul needs a purpose to live…and so I concluded that my purpose was to kill everyone besides myself. I felt alive…” – Gaara

“One day, I’d like to become something precious to others.” – Gaara

“Family? Let me tell you what kind of link I have with them. They are just lumps of meat linked by hatred and murderous intent!” – Gaara

“He was the one who taught me to deepen my bond with my people. Thanks to him, I was able to regain my true self. That village has him, the one who cherishes a friend’s bond more than anyone I know. Naruto Uzumaki… Knowing him and the friends he holds so dear, they will overcome this disaster and grow even stronger from it.” – Gaara

“We have walked through the darkness of this world; that’s why we are able to see even a sliver of light.” – Gaara

“If you’re truly prepared to take up the mantle of a Kage, then as Sasuke’s friend, you know what you have to do.” – Gaara

“Three times now… We’ve fought world wars for our own nations, our own villages. We’ve hurt one another. We’ve hated one another. That hatred bred a lust for power, and that lust for power created ME. I was a Jinchuuriki, the embodiment of hatred and power. And I hated this world, and all the people in it… I wanted to destroy it with my own hands. The exact same thing Akatsuki is trying to do today. But one man, one ninja from Konoha stopped me. I was his enemy, yet he wept for me! I hurt him, yet he called me his friend! He saved me! My enemy, my fellow Jinchuuriki… He suffered the same pain as me, yet bore no ill will! There are no enemies here because we’ve all suffered at Akatsuki’s hand!” – Gaara

If you're a fan of Goblin Slayer, then you know that the show can be pretty dark and violent. But it's also full of inspiring END_OF_DOCUMENT_TOKEN_TO_BE_REPLACED

In One Piece, there are many memorable quotes from the different characters. Whether they are funny, inspiring, or heartbreaking, these quotes stay with you long END_OF_DOCUMENT_TOKEN_TO_BE_REPLACED

Kakashi Hatake is one of the most popular characters in the Naruto series. He is known for being a skilled ninja, as well as his END_OF_DOCUMENT_TOKEN_TO_BE_REPLACED

Might Guy is one of the most entertaining characters in "Naruto Shippuden". He's always cracking jokes, and he's never afraid to speak his mind.In fact, END_OF_DOCUMENT_TOKEN_TO_BE_REPLACED

In the anime series Naruto, there is one character who always stands out to me and that is Gaara. He is a complex character with END_OF_DOCUMENT_TOKEN_TO_BE_REPLACED

Fruits Basket is a Japanese manga series originally serialized in a magazine called Hana to Yume from 1998 to 2006. It follows the Sohma family END_OF_DOCUMENT_TOKEN_TO_BE_REPLACED