Dragon Ball Z is one of the most popular anime of all time. It is full of action, adventure, and inspiring quotes that can help you succeed in life.

Akira Toriyama, the creator of the famous Dragon Ball series, is a master at delivering powerful messages through his characters.

In this article, we will explore 28 of the best Dragon Ball Z quotes that will help you achieve success! 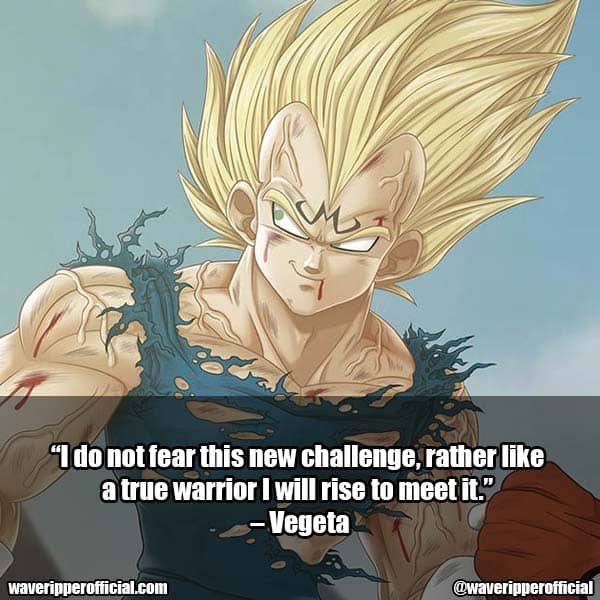 “I do not fear this new challenge, rather like a true warrior I will rise to meet it.” – Vegeta

“Strength is the only thing that matters in this world. Everything else is just a delusion for the weak.” – Vegeta

“Where is your honor!? Like all pure-blooded Saiyans, Kakarot would rather die fighting than win with one of those disgraceful senzu beans as his crutch! Kakarot trained in the hyperbolic time chamber just as we did! Now let’s see what he can do!” – Vegeta

“There’s only one certainty in life. A strong man stands above and conquers all!” – Vegeta

“I’ll never give in to you circus freaks!” – Vegeta

“What’s wrong Frieza? Is your brain another one of your weak and underused muscles?” – Vegeta

“Kakarot, you’re quite impressive. I never stood a chance against Buu, you’re the only one who can fight him. I think I finally understand how a genius like myself can’t surpass you. I thought it was because you had something to protect. I thought your drive to protect allowed you to take advantage of your capabilities… this may have been a reason, but not I too have this drive. I fought to do as I wished, because it was fun to kill my enemies and feed my pride. But he’s different, he fights not to win but because he absolutely won’t lose, causing him to break his limits and he really doesn’t care who his opponent is. So when he didn’t kill me, it was because he saw I could care for others, like I do now… Go Kakarot, you’re number one!” – Vegeta

“Even the mightiest warriors experience fears. What makes them a true warrior is the courage that they possess to overcome their fears.” – Vegeta

“There’s no such thing as fair or unfair in battle. There is only victory or in your case, defeat.” – Vegeta

“Kakarot… please… destroy Frieza… He made me what I am. Don’t… let him… do it… to anyone else. Whatever it take… Stop him… Please.” – Vegeta

“There are three things I cannot tolerate: cowardice, bad haircuts, and military insurrection. It is very unfortunate that our friend Vegeta possesses all three of these.” – Frieza

“Well, I wonder what the prince would do if he knew, you authorized Planet Vegeta’s destruction from the start?” – Whis

“You failed to protect your planet, because of your own leniency. The only way to avoid this outcome is to send Frieza back to his flower garden.” – Whis

“Death is simply another stage of our life.” – Grand Elder Guru

“You will not go in there with hopes of winning the tournament the first time you compete. To do so would be arrogant! And arrogance is for fools, not warriors! So you will enter the tournament with the sole purpose of improving your fighting skills.” – Master Roshi

“You’re about to find out what it’s like to fight a real super saiyan… and I’m not talking about Goku.” – Trunks

“I am a god with a heart, but there’s one thing I cannot tolerate… people who don’t pay their proper respect to others.” – Beerus

“I start wars, resolve them myself, then I buy up the war ravaged lands for a low prince and make a killing off redevelopment and reconstruction concessions! It is a brilliant scheme.” – Frost

“Look Goku, you can go out in public and have your hair sticking out in every direction if you want to, but not me!” – Bulma Briefs

“I’m not going to lie to you, Vegeta, although the answer may be difficult for you to hear. This is the truth. Goku devoted his life to protecting the lives of other. Because of his selflessness, when he died, he was allowed to keep his body and travel to King Kai’s Planet. You, on the other hand, have spent your life in pursuit of your own selfish desires. You’ve caused too much pain. When you die, you will not receive the same reward.” – Piccolo

“Even If evil makes you lose your way, you stay your ground and keep searching for the path of good. Is that search now what justice is? It is for that reason that gods gave mortals knowledge.” – Gowasu

“I vowed that earth would forever remain in peace. Since I made that vow, not a single threat has been made against earth. That’s all thanks to the fact that my name is known through the entire galaxy.” – Hercule

“I would rather be a brainless monkey than a heartless monster.” – Goku

“Your new form is burning through more power than your body can supply. You should hav ewaited until you were used to this form and knew how to regulate it before you started picking fights.” – Goku

“I have a family of my own I need to tend to. Two boys and a wife. An extremely angry wife who probably wants to kill me right now.” - Goku

“Maybe you’ll come back someday as…as a better person, I hope. I’d like that. Perhaps we’ll have a little one on one.” - Goku

“I am looking at things from a much higher perspective than you. I observe this world, this universe, the truth of all things. And I have realized that humans must be destroyed. Out of all which the gods have made, mortals are their sole failure. In order to make this world, this universe, into a beautiful utopia, I must remove humanity, in place of the gods who refuse to admit their mistake.” – Black Goku

I hope this list of Dragon Ball Quotes will live deep in your hearts and use this to live as a good guy. Which one of the Dragon Ball z quotes is your favorite?

If you're a fan of Goblin Slayer, then you know that the show can be pretty dark and violent. But it's also full of inspiring END_OF_DOCUMENT_TOKEN_TO_BE_REPLACED

In One Piece, there are many memorable quotes from the different characters. Whether they are funny, inspiring, or heartbreaking, these quotes stay with you long END_OF_DOCUMENT_TOKEN_TO_BE_REPLACED

Kakashi Hatake is one of the most popular characters in the Naruto series. He is known for being a skilled ninja, as well as his END_OF_DOCUMENT_TOKEN_TO_BE_REPLACED

Might Guy is one of the most entertaining characters in "Naruto Shippuden". He's always cracking jokes, and he's never afraid to speak his mind.In fact, END_OF_DOCUMENT_TOKEN_TO_BE_REPLACED

In the anime series Naruto, there is one character who always stands out to me and that is Gaara. He is a complex character with END_OF_DOCUMENT_TOKEN_TO_BE_REPLACED

Fruits Basket is a Japanese manga series originally serialized in a magazine called Hana to Yume from 1998 to 2006. It follows the Sohma family END_OF_DOCUMENT_TOKEN_TO_BE_REPLACED