Ever felt like you need an encouraging word to unleash your inner warrior? If so, then this blog post is just for you!

Demon Slayer has a lot of great quotes that will give you the motivation and encouragement needed to take on anything.

It's time to go all-in and be ready for anything life throws at us. You can do it! Don't let anyone tell you differently. 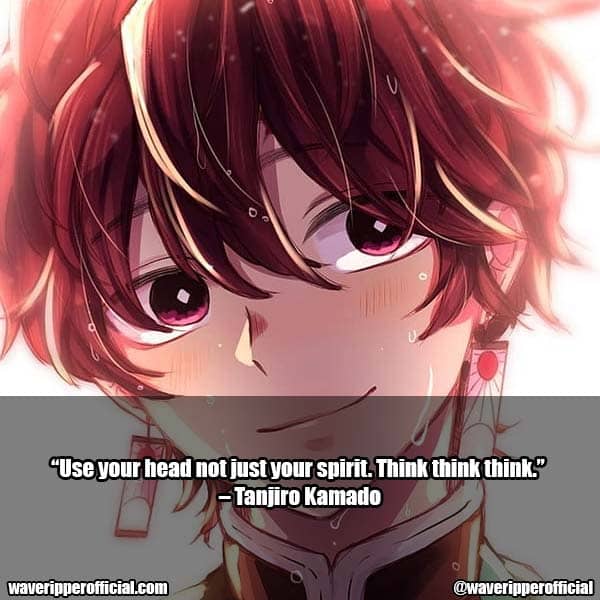 “Use your head not just your spirit. Think think think.” – Tanjiro Kamado

“Breathe all the way into my fingertips! Meditation boosts concentration.” – Tanjiro Kamado

“I can do it I know I can do it. I’m the guy who gets it done broken bones or not… No matter what… I can do it and I can fight!” – Tanjiro Kamado

“Those who regretted their own actions. I would never trample over them. Because demons were once human, too. Just like me, they were human, too.” – Tanjiro Kamado

“Work at it. All I can do is work hard! That’s the story of my life!” – Tanjiro Kamado

“No matter how many people, you may lose, you have no choice but to go on living. Regardless how devastating the blows maybe.” – Tanjiro Kamado

“I swear your big brother will save you no matter what!” – Tanjiro Kamado

“Go further! If you’re a man. If you call yourself a man! There’s no other way to go but forward!” – Sabito

“All you did was memorize a fact. Your body has no clue what it needs to do.” – Sabito

“I may be the only swords-lady among the pillars who can’t cut a demon’s head off. But anyone who creates poison that can kill demons can be quite amazing.” – Shinobu Kocho

“The weak have no rights or choices. Their only fate is to be relentlessly crushed by the strong!” – Giyu Tomioka

“Feel the rage, The powerful, pure rage of not being able to forgive will become your unswerving drive to take action.” – Giyu Tomioka

“If you can only do one thing, hone it to perfection. Hone it to the utmost limit.” – Jigoro Kuwajima

“In this world, there is only one demon whose blood flowing in its veins has the power to turn humans into demons.” – Muzan Kibutsuji

“I am a perfect creature that is infinitely close to perfection.” – Muzan Kibutsuji

“I want you to remove the head of that demon hunter with the hanafuda earrings.” – Muzan Kibutsuji

“Do you have something you want from me? You’re in quite a panic.” – Muzan Kibutsuji

“Be thankful for the blood… You are not allowed to spill even a single drop on the ground… for if you do… your torso and head shall have a sorrowful parting.” – Kokushibo

“Don’t ever give up. Even if it’s painful, even if it’s agonizing, don’t try to take the easy way out.” – Zenitsu Agatsuma

“I’ve… been protecting it… because you… said that… this thing is more important to you… than your own life.” – Zenitsu Agatsuma

“Clearly Gramps did smack me around a bit too much. But he never abandoned me.” – Zenitsu Agatsum

Trivia Questions on Kimetsu no Yaiba

Don't give up! This is Tanjiro's catchphrase. Although you don't hear him say this in plain words, you can see the determination on his face and actions.

What is the moral lesson of the Demon Slayer?

Demon Slayer has many moral lessons that you can apply in real life. One of these lessons is to appreciate the little things in your life.

Don't take anything for granted in your life because nothing is permanent in this world.

If there's anything Tanjiro's family has to say, it's that you should value what you have at all times since you might never know when something will be taken away from you.

Throughout the series, you can see that the characters never choose to give up. They keep on doing what they need to do to achieve greatness.

What is Tanjiro famous for?

This young protagonist is a demon slayer. He trained to become one, so he can avenge his family.

Being the eldest brother, Tanjiro tries to protect his only surviving kin, Nezuko, his little sister.

Tanjiro's notable personality is his ability to empathize with other people. He could clearly feel and understand what others feel even if he hasn't been exactly in their situation.

Is Demon Slayer the best?

Many anime fans (and even critics) consider this series as one of the best shows in the shonen genre.

Of course, the anime has plot holes and its storyline is a cliche in most parts. But, the main protagonist is so relatable that viewers are willing to overlook these flaws.

There's a charismatic aura to the whole cast.

These amazing Demon slayer quotes I’ve shared with you today should help you get a sense of how these brave warriors think and feel.

What do you find most inspiring about the demon-slaying profession? Is there any advice or wisdom that resonates deeply with your own life struggles?

I hope this blog post was helpful in understanding more about what it means to be a demon slayer. If not, let us know!

Which Demon Slayer Pixel Art In minecraft Looked The best?

If you’re an anime fan, chances are you know about the popular series Vampire Knight. It follows a young girl named Yuuki as she navigates END_OF_DOCUMENT_TOKEN_TO_BE_REPLACED

Tokyo Revengers is an anime series that is full of quotable moments. Each episode leaves you thinking about life in a different way. Here are END_OF_DOCUMENT_TOKEN_TO_BE_REPLACED

Are you an anime fan looking for inspiring words? You've come to the right place! Classroom of the Elite is a unique manga that provides END_OF_DOCUMENT_TOKEN_TO_BE_REPLACED

Anime fans around the world know about Chainsaw Man. The series has a huge following, and for good reason! The anime is packed with action, END_OF_DOCUMENT_TOKEN_TO_BE_REPLACED

If you are a Black Butler fan, then you know that the anime is full of memorable quotes. In this blog post, we will share END_OF_DOCUMENT_TOKEN_TO_BE_REPLACED

If you're a fan of Goblin Slayer, then you know that the show can be pretty dark and violent. But it's also full of inspiring END_OF_DOCUMENT_TOKEN_TO_BE_REPLACED