Cowboy Bebop is a classic anime that has been quoted and referenced by many other works since it debuted in 1998.

The show follows the adventures of a group of bounty hunters as they travel across the galaxy. The dialogue is often sharp and funny, and the characters are some of the most interesting in all of anime.

In this blog post, let's look at 30+ Cowboy Bebop quotes! 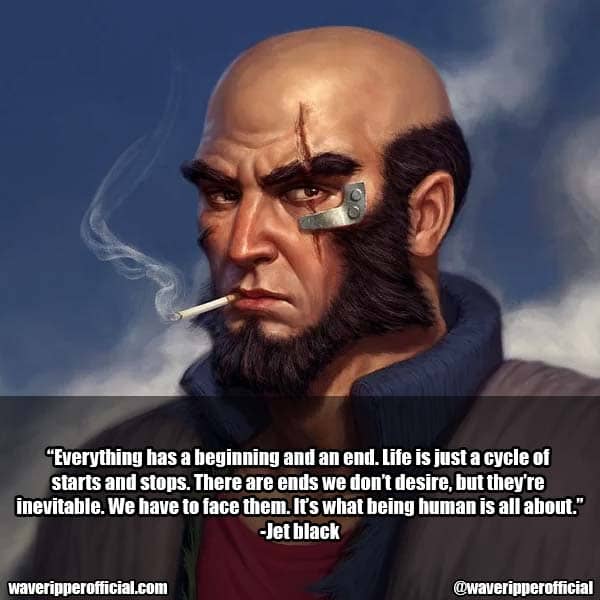 “Everything has a beginning and an end. Life is just a cycle of starts and stops. There are ends we don’t desire, but they’re inevitable. We have to face them. It’s what being human is all about.” – Jet Black

“You were always there for me, and that’s all I needed. Just you. For some reason, I didn’t feel sad or broken up, it just didn’t seem real. But slowly I realized it was real – that you were gone. And little by little, I slowly felt something inside me go numb.” – Jet Black

“When you and I first met, you told me something. You said that you had died once, that you had seen death. Why can’t you just let it go? Forget the past.” – Jet Black

“It’s just like Charlie said in my dream. If you want to receive you have to give. See Spike, you got to listen to your dreams, that’s how you find your dream girl.” – Jet Black

“Men always seem to think about their past before they die, as though they were frantically searching for proof that they truly lived.” – Jet Black

“Back then when I got home from work, you were always there waiting for me. And that was all I needed. Just you. But on that day, when I came back home the only thing there was that pocket watch; that and a small piece of paper that just had one word written across it: farewell.” – Jet Black

“Humans were meant to work and sweat for their money after all. Those that try to get rich quickly or live at expense of others – all get divine retribution along the way. That is the lesson. But, one thing about humans is that they quickly forget the lesson they have learnt.” – Jet Black

“Ah! I never wanted to live with this regret. So, I try in every moment to not have anything that I didn’t do or try. That’s so true when we talk to people who’re older or about to die.” – Jet Black

“Don’t you want to hang out and waste your life with us?” – Spike Spiegel

“There are three things I hate the most: Kids, pets, and women with attitude. So tell me, why do we have all of them packed into our ship?” – Spike Spiegel

“A fallen angel banished from heaven arises into the light to be received by the benevolence of God.” – Spike Spiegel

“Look at my eyes, Faye. One of them is a fake because I lost it in an accident. Since then, I’ve been seeing the past in one eye and the present in the other. So, I thought I could only see patches of reality, never the whole picture. I felt like I was watching a dream I could never wake up from. Before I knew it, the dream was over.” – Spike Spiegel

“They say hunger is the best spice.” - Spike Spiegel

“We are all in the perpetual quest for keeping oneself occupied, entertained, and important—which burns at the edge of addiction.” - Spike Spiegel

“I was younger then, I wasn’t afraid of anything, I didn’t think about dying for a second. I thought I was invincible. Then I met some girl. I wanted to live, I started to think like that; for the first time I was afraid of death. I had never felt like that before.” – Spike Spiegel

“Once, there was a tiger striped cat. This cat, died a million deaths, revived and lived a million lives. And he had various owners that he didn’t really care about, the cat wasn’t afraid to die. Then ONE day, he met a white female cat, the two of them fell in love and lived together happily. Well, the years went by and the white female cat got old and passed away. The Tiger Striped cat cried a million times, then he also died. But this time…..he didn’t come back.” – Spike Spiegel

“Why don’t we drink to me and my reflection in your lovely eyes?” – Andy Von De Oniyate

“Angels banished from heaven have no choice but to become devils.” – Vicious

“A ravenous beast. The same blood runs through both of us. The blood of a beast who wanders, hunting for the blood of others.” – Vicious

“That’s just how you were back then, you made every decision; in the end, you were always right. Whenever I was there with you I didn’t have to do anything for myself. All I had to do was to hang onto your arm like a child without a care in the world. I wanted to live my life; make my decisions, even if they were terrible mistakes.” – Alisa

“That’s a story from long ago. I’ve forgotten about it. Time never stands still.” – Alisa

“You said that you didn’t need comrades, but I’m attached to that word… to the point of tears.” – Gren

“Do not fear Death. Death is always at our side. When we show fear, it jumps at us faster than light. But, if we do not show fear, it casts its eye upon us gently and then guides us into infinity.” – Laughing Bull

“Tell me, why do people believe in God? It is what they want to do. Living in such an ugly and corrupt world is not easy. There is no certainty and nothing to hope for. People are lost, so they reach out, don’t you get it? God didn’t create humans, no it’s humans that created God.” – Dr Londes

“The souls that God has given us, our spirits. Our spirits, which found a way to swim through the immense network and live in the infinity of space. Is not the human body a mere shell? A form of existence all too small and weak for consciousness with such vast reach and potential.” – Londes

“No one can draw a clear line between sane and insane. You move that line as you see fit for yourself. No one else can. You’ll understand soon… that the one that’s insane is this world.” – Vincent Volaju

“Know much about purgatory? It’s the place between heaven and hell, where those who were left behind, unable to get into heaven continue to suffer, a place of struggle and pain. In other words, the world that we’re in now.” – Vincent Volaju

“Of the days that I have lived, only those I spent with you seemed real.” – Vincent Volaju

“I have no fear of death. It just means dreaming in silence. A dream that lasts for eternity.” – Vincent Volaju

“I can’t be stuck in one place for long—it’ll kill me. My whole family’s like that.” – Faye Valentine

“You know the first rule in combat? shoot them before they shoot you.” – Faye Valentine

“The past is the past and the future is the future. A man is a man and a woman is a woman. The present is the present. I am who I am and you are who you are. That’s all there is to it. Does it really matter? Or do we just think it does?” – Faye Valentine

“Survival of the fittest is the law of nature. We deceive or we are deceived. Thus, we flourish or perish. Nothing good ever happened to me when I trusted others. That is the lesson.” – Faye Valentine

“Men are such idiots”. – Faye Valentine

“You told me once to forget the past, cause it doesn’t matter, but you’re the one still tied to the past, Spike.” – Faye Valentine

What do they say at the end of Cowboy Bebop?

"You're gonna carry that weight."

Oh, boy! Anime fans who fell in love with the series took it seriously.

But what does this mean?

The "weight" of the past? The weight of responsibility, family, duty? Or is it all that and more? Perhaps it's even specifically tied to Spike Spiegel as a character.

What is the moral of Cowboy Bebop?

The moral of Cowboy Bebop is that anyone can change their life for the better, no matter how difficult things seem. The characters in Cowboy Bebop all had tragic pasts searching frantically for purpose, but they were able to overcome them and become better people.

The show also teaches viewers to never give up on themselves, no matter how bad things may seem. The characters in Cowboy Bebop faced many challenges throughout the series, but they never gave up on themselves.

They kept fighting even when the odds were against them, and they eventually achieved their goals. The moral of Cowboy Bebop is that it’s never too late to change your life for the better, and you should never give up on yourself.

Why did Cowboy Bebop get canceled?

There's been a lot of speculation over the years. Some say it was because the producers didn't want to continue funding it. Others believe that the creators had planned on ending it at episode 26 all along. The truth may never be known.

But one thing is for sure, Cowboy Bebop is one of the most beloved anime shows of all time. It's a shame it had to end so soon.

Is Ein from Cowboy Bebop a boy or girl?

Ein is a data dog, or in other words, an artificially created intelligence. This AI has no gender and by default is considered to be a male by the rest of the crew on Bebop (although it's shown at one point that he can physically change himself into a female form).

Cowboy Bebop is one of the most quotable shows in history. If you're looking for a way to spice up your own dialogue, or just want some new quotes to add to your repertoire, then these are perfect!

Which quote was your favorite? Let me know in the comments below. I'd love to hear what you think!

If you're a fan of Goblin Slayer, then you know that the show can be pretty dark and violent. But it's also full of inspiring END_OF_DOCUMENT_TOKEN_TO_BE_REPLACED

In One Piece, there are many memorable quotes from the different characters. Whether they are funny, inspiring, or heartbreaking, these quotes stay with you long END_OF_DOCUMENT_TOKEN_TO_BE_REPLACED

Kakashi Hatake is one of the most popular characters in the Naruto series. He is known for being a skilled ninja, as well as his END_OF_DOCUMENT_TOKEN_TO_BE_REPLACED

Might Guy is one of the most entertaining characters in "Naruto Shippuden". He's always cracking jokes, and he's never afraid to speak his mind.In fact, END_OF_DOCUMENT_TOKEN_TO_BE_REPLACED

In the anime series Naruto, there is one character who always stands out to me and that is Gaara. He is a complex character with END_OF_DOCUMENT_TOKEN_TO_BE_REPLACED

Fruits Basket is a Japanese manga series originally serialized in a magazine called Hana to Yume from 1998 to 2006. It follows the Sohma family END_OF_DOCUMENT_TOKEN_TO_BE_REPLACED