If you are a Black Butler fan, then you know that the anime is full of memorable quotes. In this blog post, we will share our favorite Black Butler Quotes with you.

These quotes come from all aspects of the show, including manga and anime. We hope that you enjoy them! 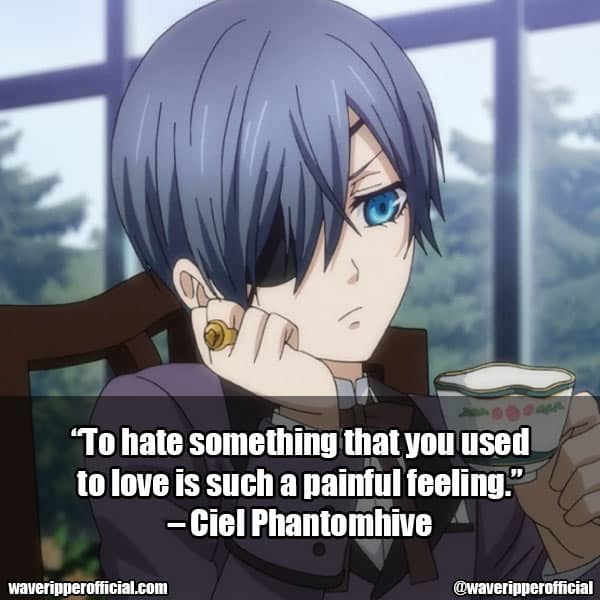 “To hate something that you used to love is such a painful feeling.” – Ciel Phantomhive

“I am not so noble that I would stake my life for someone else. Nor am I so forgiving that I would sit by and allow someone to trample me. I am selfish… and self righteous human being! That’s why! I… to clear my own shame… I used your power. Not for anyone else! But for myself!” – Ciel Phantomhive

“Death is like being born, but backwards. It only hurts for a little while, then a new life begins. A life with no sorrow, no pain, a glorious new beginning. A beginning that will last an eternity.” – Ciel Phantomhive

“Moping around with sadness and sorrow… what will come of it? Even dead people can do that. However, I’ll live and stand on my own two legs. If we are going to die one day, wouldn’t it be better to have no regrets?” – Ciel Phantomhive

“You aren’t wrong. You fought to protect your world. What’s wrong with that? In the end, “justice” is just an official line taken by those in power to serve their own ends. No one’s looking out for others. If you’re careless, you’ll be robbed. There are only two kinds of people in this world. Those who steal, and those who are stolen from. And today, I steal your futures. That’s all this is.” – Ciel Phantomhive

“Words are cheap. There’s no guarantee she won’t tell anyone. Humans lie without a second thought. Including me, of course.” – Ciel Phantomhive

“So what? You’re another person, so of course you look different. What do you need to be ashamed for? Besides, I’m free to be with whoever I want. No one has the right to say anything about it.” – Ciel Phantomhive

“After all, justice in this world is just a bunch of principles, made by those with power to suit themselves.” – Ciel Phantomhive

“There’s nothing more deceiving than an obvious truth.” – Ciel Phantomhive

“You should keep your distance from me if you want to live. My place is in the shadows, yours in the light. We walk opposite paths, Aberline. It’s best that you remember that.” – Ciel Phantomhive

“Only two kinds of people exist in this world, those who steal and those who are stolen from.” – Ciel Phantomhive

“Those bound by superficial rules who do not use their pawns to the utmost are fools.” – Ciel Phantomhive

“We mock their desperate wishes, and trample them like insects! Cowardly, base – we’re more demonic than demons are! I’m just like them. I’m full of the same ugliness they were. This is how humans are. It’s how we are, Sebastian!” – Ciel Phantomhive

“If you are crying, fight against it! If you’re regretting, walk forward! Only complaining on your misfortune, you’re nothing but a common pig!” – Ciel Phantomhive

“He is nothing more than one of my pawns. However, he is not a normal pawn. He is a pawn that can get across the whole board in one move.” – Ciel Phantomhive

“Unfortunately, in reality there is no situation where one can win merely by following the rules. There will be knights that break the rules, and even chess pieces that betray him.” – Ciel Phantomhive

“I have long forgotten how to laugh as if I were having fun.” – Ciel Phantomhive

“Love is a magnificent thing but, incidentally, it can also give birth to dreadful tragedy.” – Vincent Phantomhive

“There is nothing shameful about being different from others. This is your character! Ann’s red hair is really beautiful, just like the color of red spider lilies in their full bloom. Red really suits you. You should have more confidence in yourself.” – Vincent Phantomhive

“Passion to insincerity, lies to reality, a stray dog into an Earl.” – Claude Faustus

“If he made a ripple in the long, long lazy life of a demon, then Alois Trancy’s soul also was worth cracking open, perhaps.” – Claude Faustus

“For a mere butler, to go that far… Don’t worry, Young Master. The menial soul that can give love to one is only a butler.” – Claude Faustus

“Passion to calm, hesitation to resolve, love to gravestones. That is the Trancy butler.” – Claude Faustus

“Say, have your demonic senses weakened after devoting too much to that human’s soul?” – Claude Faustus

“I was born alone in this world and alone I will die. If this is my fate, why are tears coming out of my eyes?” – Alan Humphries

“Poetry over philosophy. Embroidery rather than cooking. Dance instead of chess. Be an unknowing angel. Every girl born in the country of roses is raised by these three words.” – Elizabeth Midford

“In this world, Earl, there are people who can’t survive because of the cruelty of reality. I sell those people dreams.” – Lau

“A good man’s past makes people curious! But if he’s a bad man, then it makes me wanna see even more!” – Grell Sutcliff

“Oh, Little Sebas-chan, I do love red the most. Hair, clothes, lipstick, I love them to be red. That’s why I love using fresh blood to do make-up for those ugly women. The more flamboyant a woman is, the more she’s as beautiful as a poisonous flower, right?” – Grell Sutcliff

“I’m going to use the heels of my shoes to step on this cold, uncaring face of yours! I want you to lick my shoes clean!” – Grell Sutcliff

“Those round and innocent eyes that know no filth or foulness, those tails that lovingly swish as if they belong to nobility, those paws in the soft shade of warm light pink!” – Sebastian Michaelis

“Yes…I am a demon. There’s no way I could understand my prey, a human’s sense of taste. What I understand is…only the taste of a human’s soul.” – Sebastian Michaelis

“For a king to survive it’s good for him to be able to skillfully manipulate the other pieces using both the knight and the queen. Beneath the throne the bodies of your pieces will pile up along with your sins. You must not lose.” – Sebastian Michaelis

“I have lived for a long time, but this is my first time meeting a space alien. What kind of counter-attack is that sparkly, smiley face expecting from me?” – Sebastian Michaelis

“As long as there is the contract, I will protect your life. However, if you make a mistake of your own accord, you will possibly suffer a painful experience while alive. You already know that, don’t you?” – Sebastian Michaelis

“Wanting to be loved, for that sole obstinate reason, people can even go this far.” – Sebastian Michaelis

“If it is your wish, I will follow you anywhere, even if your throne crumbles, and your shiny crown turns to rust. Even if the bodies pile up endlessly above the bottomless pile of corpses. Beside you as you lie down softly, I will be, until I hear the words “Check Mate.” – Sebastian Michaelis

“You see, I'm merely one hell of a butler.” – Sebastian Michaelis

“Once one has rejected faith, it will become impossible for him to enter the gates of Heaven.” – Sebastian Michaelis

“Always skillfully manipulate your pieces, that’s how you survive. Use me and madam red, any piece within your reach. Even if the bodies of your pawns pile up in front of your thrown. Because if the king falls – this game is over.” – Sebastian Michaelis

“Humans are easily tempted. When they are poised on the edge of hellish despair, and a spider-thin thread of salvation presents itself, they will invariably grasp it. No matter the human.” – Sebastian Michaelis

“At this moment, my body and soul, to the last hair, belong to my master.” – Sebastian Michaelis

“Cats are great. They don’t talk about useless things. Or do them. Nothing is cuter. They are something that don’t exist in my world. They have pets over there as well…but…it doesn’t quite compare.” – Sebastian Michaelis

“These are my precious glasses that the young master bought for me! These maid outfits as well. Before I’d come here, I’d never worn anything like a skirt. I’m so happy I’m a maid now.” – Maylene

“I’ll keep to what the young master has told me. To face the master with a clean mansion every day. That is a maid’s job. I wipe away the mansion’s dirt.” – Maylene

“I have a dream at last. The butterfly trapped in a spiderweb has no wings. That butterfly is… me.” – Alois Trancy

“My heart was entwined in a spider web. You’ll always be my Highness. I wanted your love.” – Alois Trancy

“The ring seems more like a collar to me. I hope that one day that collar chokes you.” – Undertaker

“How sad it would be if laughter should disappear.” – Undertaker

20+ Black Clover Quotes To Help You in Facing Adversity

If you’re an anime fan, chances are you know about the popular END_OF_DOCUMENT_TOKEN_TO_BE_REPLACED

Calling all anime fans! Are you ready to jump into a hot END_OF_DOCUMENT_TOKEN_TO_BE_REPLACED

Tokyo Revengers is an anime series that is full of quotable moments. END_OF_DOCUMENT_TOKEN_TO_BE_REPLACED

Are you an anime fan looking for inspiring words? You've come to END_OF_DOCUMENT_TOKEN_TO_BE_REPLACED