Are you ready to have your mind blown? Because I've got 30 of the best Beyblade quotes for you, and they're all about getting ready for battle.

Whether you're a seasoned pro or a complete beginner, these quotes will help get you psyched up and ready to take on your opponents! 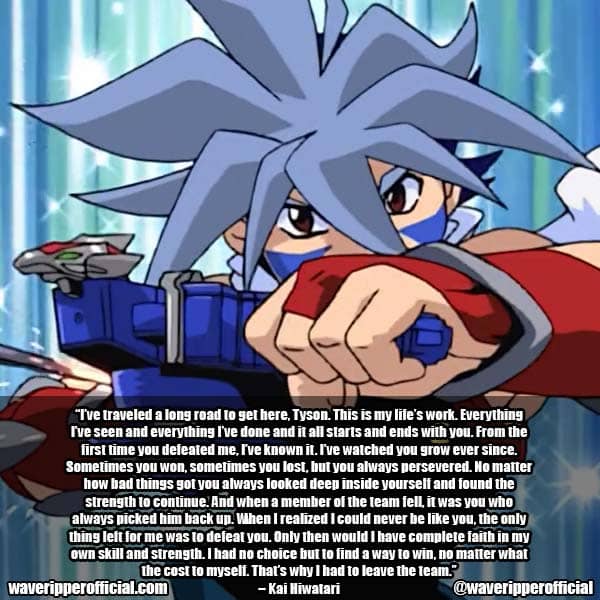 “I’ve traveled a long road to get here, Tyson. This is my life’s work. Everything I’ve seen and everything I’ve done and it all starts and ends with you. From the first time you defeated me, I’ve known it. I’ve watched you grow ever since. Sometimes you won, sometimes you lost, but you always persevered. No matter how bad things got you always looked deep inside yourself and found the strength to continue. And when a member of the team fell, it was you who always picked him back up. When I realized I could never be like you, the only thing left for me was to defeat you. Only then would I have complete faith in my own skill and strength. I had no choice but to find a way to win, no matter what the cost to myself. That’s why I had to leave the team.” – Kai Hiwatari

“Sorry, Gramps. But Tyson and I have work to do. Seeing as the World Championships are over, the Bladebreakers don’t exist anymore. That means we’re not teammates – we’re competitors, and I want action.” – Kai Hiwatari

Quotes about Winning and Losing

“If you think the battle is over, then you are sadly mistaken. It’s only just begun.” – Kai Hiwatari

“In losing you can learn a lot, and we did twice.” – Kai Hiwatari

“I won’t relax until I know we can beat that guy.” – Kai Hiwatari

“I think I’ve just perfected my blade. My new attack ring is awesome. Now Dranzer is ready for anything. This blade is totally state of the art. I’ll be the man to beat at the World Championships.” – Kai Hiwatari

“What was I thinking? Letting themselves explore this place by themselves. They’ve been gone over two hours now. Something must’ve happened. I’m their leader. I’m supposed to be out there.” – Kai Hiwatari

“The most important thing is to always have fun and believe in yourself.” – Kai Hiwatari

“Tyson and his Dragoon have a connection that’s nearly impossible to explain. When one is hurt, so is the other, and right now they must battle to regain their strength again.” – Kai Hiwatari

“Heh. What did you expect? No matter how many times I battle, I win. Doesn’t matter who I’m up against.” – Lui Shirosagi

“When I win, I realize how much Beyblade has changed my life for the better.” – Shu Kurenai

“I am sorry to hear about the Luinor Cup. Fubuki, stay strong, there is nothing for you to worry about. Just keep moving forward. In fact, get out of Japan and let’s catch up.” – Shu Kurenai

“I was lucky enough to have a friend. A friend who dragged me out of the darkness and showed me I was wrong. He put every emotion he had right into his Bey, and he used every bit of that strength to show me… exactly what true strength was, and true resonance.” – Shu Kurenai

“You know, I wish that sometimes I would stop and think some of my plans through.” – Tyson Granger

“We’re all one big team, and that’s the only way to come out on top.” – Tyson Granger

“Any blade takes a few spins to get right. I’m sure this won’t be any different.” – Tyson Granger

“If this is his best, he’s still got a long way to go.” – Delta Zakuro

“Only one star in the sky can shine the brightest.” – Delta Zakuro

“It doesn’t matter whether you lose or win. It’s about having fun.” – Valt Aoi

“So close, yet feels so far. What’s the point of even setting my alarm?” – Valt Aoi

“My absolute favorite thing in the world is Beyblade!” – Valt Aoi

“You’re probably learning a lot about Beyblade with all the data you’re collecting. But nobody wants to feel like they’re being used as a lab rat. As long as you’re upfront about it, everybody’s happy.” – Valt Aoi

“Shu, you’re the only reason I’m able to stand here today! I owe everything to you!” – Valt Aoi

I fly solo, but I might consider having a wingman.” – Free De La Hoya

What is the Beyblade catchphrase?

The Beyblade catchphrase is "Beyblade, let it rip!" This catchphrase is used to encourage kids to let their Beyblades rip, meaning to spin them as fast as possible.

The faster they spin, the more powerful their attacks will be. The catchphrase is also a reminder to have fun with your Beyblade battles and not take them too seriously. After all, it's just a game!

That's it for today, Beyblade fans! I hope you enjoyed these quotes as much as I did. Which one is your favorite?

Let me know in the comment section below – and don't forget to get psyched up and ready for battle! Until next time, may the best Blader win.

Which Beyblade Pixel Art in Minecraft Looks The Best?

20+ Black Clover Quotes To Help You In Facing Adversity

If you're a fan of Goblin Slayer, then you know that the show can be pretty dark and violent. But it's also full of inspiring END_OF_DOCUMENT_TOKEN_TO_BE_REPLACED

In One Piece, there are many memorable quotes from the different characters. Whether they are funny, inspiring, or heartbreaking, these quotes stay with you long END_OF_DOCUMENT_TOKEN_TO_BE_REPLACED

Kakashi Hatake is one of the most popular characters in the Naruto series. He is known for being a skilled ninja, as well as his END_OF_DOCUMENT_TOKEN_TO_BE_REPLACED

Might Guy is one of the most entertaining characters in "Naruto Shippuden". He's always cracking jokes, and he's never afraid to speak his mind.In fact, END_OF_DOCUMENT_TOKEN_TO_BE_REPLACED

In the anime series Naruto, there is one character who always stands out to me and that is Gaara. He is a complex character with END_OF_DOCUMENT_TOKEN_TO_BE_REPLACED

Fruits Basket is a Japanese manga series originally serialized in a magazine called Hana to Yume from 1998 to 2006. It follows the Sohma family END_OF_DOCUMENT_TOKEN_TO_BE_REPLACED