Anime and its storylines range from tense action sequences to excellent art-style. Aside from these, anime dances in the opening, ending song, and in the episode make anime fans gush all over again with awe.

I know you're guilty of doing those dance routines on social media, particularly TikTok and Youtube. How can you not? The dance steps are easy, cute, and memorable. So, if you've been looking for some dance sequences for your next Tiktok video or cosplay dance floor moves, here is a list you can check and practice. 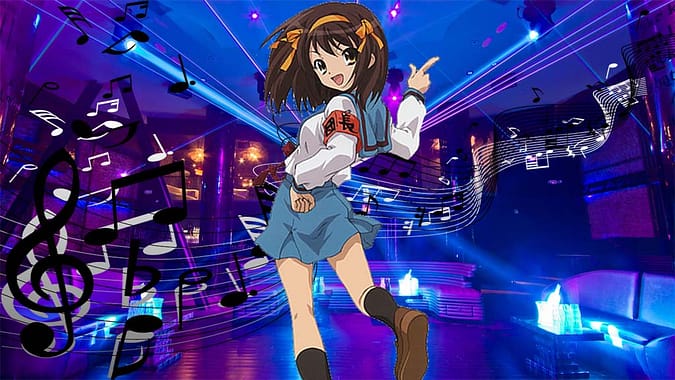 Hare Hare Yukai is the theme song (ending part) of The Melancholy of Haruhi Suzumiya. The dance in the ending song became one of the most sensational dances in early 2000.

Many anime fans recreated the video worldwide. Hare Hare Yukai is a trendsetter of anime dances.

Some dances such as Princess Tutu have come before it but the anime dance sequences are not as addictive as the dance of Haruhi Suzumiya together with her SOS Brigade members.

Hare Hare Yukai is really a fun dance you and your friends must try.

Anime dances aren't just cutesy. The Torture Dance is quite bizarre, not because of the dance moves. It's the premise as to why the characters are dancing. The Part 5 episode dance from Jojo's Adventure lasts for a minute while the group is torturing somebody to divulge information.

The dance features a hip-song entitled Canzoni Preferite. Many anime lovers have recreated this dance. You can see uploaded video parodies, anime GIF, all over the world. If you like hip hop and feel like a gangsta member, this is your groove.

KyoAni is the expert behind the sick dance moves in Splash Free ending song. It's like watching a boy band video doing their dance routine for a single.

Interestingly, the choreography reflects the swimming styles of the characters dancing. Not a surprising thing because the anime series is about swimming.

Kyoukai no Kanata (Beyond the Boundary)

Beyond the Boundary is about spirit warriors hunting down youmu. Youmous are supernatural beings. One day, the heroes in the series encountered a powerful youmu. Even their powers couldn’t defeat this but succeeded.

What did they do? Dance and sing! Yes, the protagonists distracted their enemy with perfectly choreograph and dance moves that’ll make you swing your head or your body to the music.

Many anime fans hate Lucky Star, well maybe, because of how “boring” some of the episodes are. Some couldn’t follow the storyline.

Still, you couldn’t hate the characters’ fun dance at the beginning song of the series. It’s so cute and catchy you couldn’t help but tap your feet and nod your head to the beat. I’m guessing you’re trying out the dance moves on your head right now.

Caramell Dans is an opening song in the anime Popotan. The anime series is almost twenty years old as of today. Still, the song immortalized in the anime had been danced a thousand times, and fans uploaded their own versions.

The music is catchy. The squeaky, girlish tone and the tempo can make you sing. No matter how many times you listen to it, you couldn’t help but put your hands in the air and do the groovy moves. Based on some sources, the original song comes from the NSFW video.

Kill Me Baby is a comedy series where a high school student is also an assassin. The ending song with its dance is quite charming. Despite its weird and flat art-style, you couldn’t help but laugh at the dance routine.

Whether you like it or not, I know you’re dying to try that out in TikTok and have your followers wonder if you’re being weird or just hilarious. Whichever is the case, enjoy dancing the peculiar routines and tell me how it feels.

The second best to Hare Hare Yukai is the Chika Dance in terms of routines. The Chika dance comes from the anime series Kaguya-sama: Love is War. Chika Fujiwara performs the routine in the 3rd episode of the show.

The dance sequence is more realistic than the dance of Haruhi. It’s like watching a real person dance. It’s not surprising because the animators used the rotoscoping technique. Try this now and upload your own version.

Ayumu Aikawa loves to breakdance and even uses it to cheer up people. He’s a high school boy who turned into a zombie after a necromancer dressed in Lolita-style resurrected him.

The sequences aren’t as smooth and real as the Chika dance. However, they’re worth trying, if you love break dancing. Just make sure you don’t break your arm like Ayumu Aikawa did when he was trying to impress a lady (the same one who resurrected him).

Honoka Kousaka wants to save her beloved high school when it’s on the verge of closing due to low enrollees. She creates an idol group to raise the popularity of the school and lure students in enrolling.

Honoka names the group “Muse”. The Idol series features anime dances and songs that you should try dancing in your next TikTok anime dance videos.

One Piece is one of the longest-running animation TV shows. It has been airing for more than 20 years. In the series, Luffy wants to become the King of Pirates.

Jango's Dance Carnival is a short film where Luffy and his crew were hypnotized to dance the whole night. Not just them but the whole island where they stopped for a while. The short film shows that you don't need to be an expert to dance.

Just feel the beat. Follow your heart and what your body tells you to do even if it doesn't look awesome to others.

The spin-off features a cool dance choreography. The characters did it during their school festival. Seeing a character who has this serious aura in the regular series is quite a refresher. After all, they're still students burdened with standards they have to live on.

It's short but sweet. You might want to try those moves.

The anime show features handsome idols often dancing and singing. The dance is so graceful. With fan screams surrounding them, you'd think you teleported into the scene.

This series is a reverse harem where one girl is surrounded by 13 brothers. Getting them to dance and sing together would be a feat. The moves are easy to learn. You can use them to impress someone in the dance floor.

Do you want an anime with dancing as its main theme? Well, here it is. This show is all about dancing. The girls have their yosakoi dance club. Yosakoi dance combines traditional Japanese dance and modern music. The song is great and the dance moves are easy to follow even for beginners.

THE iDOLM@STER is about a group of girls who like to be the next idols. The group composes of thirteen teen girls. Since they want to become stars, you will usually see them dancing and singing. Expect a lot of dance performances. The good news is you can learn those dance steps and use them in your next video.

Love, Chuunibyou, and Other Delusions

As the title suggests, the anime is about teens who think they have superpowers. It's a comedy with lots of laughter. Dancing seems to be part of being a teenager. The series has captured that side of teenage life. The dance in this show has a weird choreography, but it's quite hypnotic to watch.

Other Anime with Great Dances

Dance is part of a person's life, at least to an anime fan. I know you've danced once or twice in your life. These anime dances can bring your inner you, whether weird or not. I hope that this list helps you in planning your next anime GIF, TikTok video or cosplay performance.

Tokyo Ghoul is a dark, gritty anime that tells the story of humans living in fear of Ghouls: beings that look human but survive by END_OF_DOCUMENT_TOKEN_TO_BE_REPLACED

What would you do if you could take out your enemies with a single punch? For most people, the answer is nothing, because they don't END_OF_DOCUMENT_TOKEN_TO_BE_REPLACED

Eye color in anime varies. You have blue, purple, gold, brown, black, and red. Typically, anime characters with red eyes are either demons, vampires, or END_OF_DOCUMENT_TOKEN_TO_BE_REPLACED

Fans are no strangers to anime characters with purple eyes. Though it's not a particularly common eye color, there are still quite a few anime END_OF_DOCUMENT_TOKEN_TO_BE_REPLACED