26+ Sad Anime Quotes That Will Break Your Heart

I love Anime, and I am always on the lookout for quotes that will make me laugh.

However, sometimes it is nice to take a break from laughter and focus on more serious things. These are 26+ of my favorite Sad Anime Quotes that made me cry! 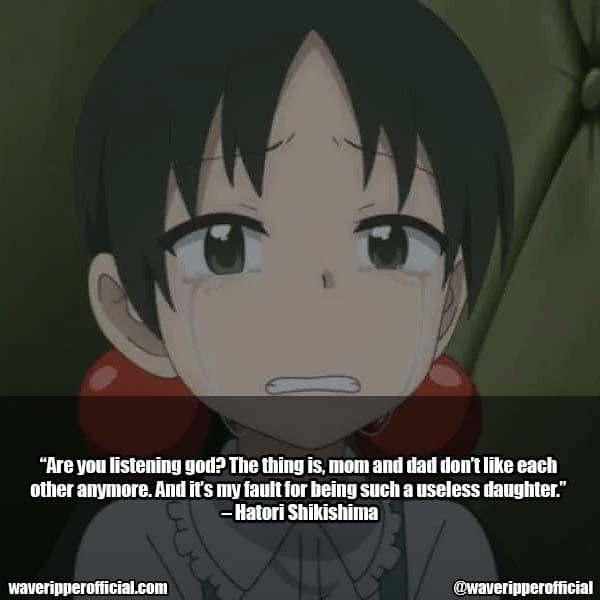 “Are you listening god? The thing is, mom and dad don’t like each other anymore. And it’s my fault for being such a useless daughter.” – Hatori Shikishima

“I think death is equally terrible for everyone. Young people, old people, the good, the bad; it’s always the same. It’s rather fair in its treatment. There’s no such thing as a particularly terrible death, that’s why it’s frightening.” – Sunako

“The loneliest people are the kindest. The saddest people smile the brightest. The most damaged people are the wisest. All because they don’t wish to see anyone else suffer the way they did.” – Jellal Fernandes

“The thing I wished for destroyed my whole family. I brought all this suffering down on my family because I made a wish for my dad without knowing what he really wanted.” – Kyoko Sakura

“They call certain methods of fighting good and others evil, acting as if there were some nobility to the battlefield. Such illusions, perpetrated by heroes throughout history, have led countless young men to their bloody deaths, all for the sake of this valor and glory.” – Kiritsugu Emiya

“I bet dead people are easier to get along with.” - Crona

“Remember what you said before? A normal person with a gun will wind up doing something he never thought himself capable of? No one in this world can truly hold himself separate from violence. Guns are literally within reach of anyone. Sadly that’s where we put our faith, in bullets rather than human kindness.”- Koko Hekmatyar

“Forget about revenge. The fate of those who seek revenge is grim. It’s tragic, You will end up suffering and hurting yourself even more. Even if you do succeed in getting revenge, the only thing that remains is emptiness.” – Hatake Kakashi

“All this time, I seriously thought that it's better to die than to live your life alone.”- Kirito

“Being alone is better than being with the wrong person.” - L Lawliet

“Do not seek death. But do not fear it either. There cannot be life without death, it is inescapable.” - Keisei Tagami

“Rock, if you think about it, other than this, what do we really value in life? God? Love? Don’t make me laugh. When I was a brat, crawling around in that shithole city, it seemed God and Love were always sold out when I went looking. Before I knew better, I clung to God and prayed to Him every single night — yeah, I believed in God right up until that night the cops beat the hell out of me for no reason at all. All they saw when they looked at me was another little ghetto rat. With no power and no God, what’s left for a poor little Chinese bitch to rely on? It’s money, of course, and guns.” – Revy Rebecca

“Human beings are strong because we can change ourselves.” – Saitama

“Even if I'm worthless and carry demon blood... thank you for loving me!” - Portgas D. Ace

“I’m such a hopeless idiot. All this time and I haven’t grown up one bit. I thought maybe the rain would wash away some of this gloom that’s been following me… but right now, every drop that hits my face is even more depressing.” – Edward Elric

“There are people in this world who don't understand that what they consider a harmless prank can deeply hurt someone else.” - Mio Nishizono

“I’ll never resent you, or hate you, or hurt you. Not ever. Not you or anyone. I’d rather die. So If I’m killed, I’ll face my killer with a smile. And I’ll tell them that it’s okay because it won’t be their fault for doing it. It’ll just be that they don’t know any better. I’ll die hopeful, that my death might have helped them… to understand someday.” – Photo

“The two of us aren’t so different. My whole life I’ve desired from others. i felt bitter to the people around me and I closed off my heart. And a heart that lets nothing in, will become empty before you realize it.” – Mei Aihara

“It’s just like changes in the notes and passports. You may find it hard to adjust to at the beginning, but you get used to it eventually. Time is very depressing after all… Both happiness and sadness fade away with time.” – Detective Conan

“Perhaps the companionship of an evil person is preferable to loneliness.” – Gaara

“I always believed that everyone in this world was far nicer and smarter than me. That no matter how unlikeable they seemed to be, they still had a good conscience and had justifiable circumstances for acting the way they did. That’s why I hated myself for being so timid and depressed when I didn’t even have any good reason for doing so. …But now I see that there actually are people who’re despicable in every way and don’t blink twice at ruining another’s life.” – Punpun Onodera

“The scariest thing about killing people is getting used to it! When you kill someone and realize you won’t be punished… That’s when people forget all about punishment.” – Rentaro Satomi

“It's okay to feel depressed. It takes time to overcome things. And then, by taking that time, you just start moving forward again. That's just what humans do.” - Mondo Oowada

“Having happy and beautiful memories won't always bring you salvation. The more beautiful a memory is, the more painful it can become.” - Isla

“The past makes you wanna die out of regret and the future makes you depressed out of anxiety. So by elimination, the present is likely the happiest time.” – Hachiman Hikigaya

“Love is never as simple as sharing the same path.” - Khamsin

I hope you enjoyed these sad anime quotes as much as I did. It’s always nice to take a break from the laughter and focus on more serious things every once in a while.

Be sure to share this post with your friends if you found it interesting, and let me know what is your favorite sad anime quote in the comment section below!

If you're a fan of Goblin Slayer, then you know that the show can be pretty dark and violent. But it's also full of inspiring END_OF_DOCUMENT_TOKEN_TO_BE_REPLACED

In One Piece, there are many memorable quotes from the different characters. Whether they are funny, inspiring, or heartbreaking, these quotes stay with you long END_OF_DOCUMENT_TOKEN_TO_BE_REPLACED

Kakashi Hatake is one of the most popular characters in the Naruto series. He is known for being a skilled ninja, as well as his END_OF_DOCUMENT_TOKEN_TO_BE_REPLACED

Might Guy is one of the most entertaining characters in "Naruto Shippuden". He's always cracking jokes, and he's never afraid to speak his mind.In fact, END_OF_DOCUMENT_TOKEN_TO_BE_REPLACED