Thick brows, bowl-cut hair, round eyes, and green overalls? Who wouldn't recognize Rock Lee? He's one of those anime characters with noticeable personalities.

Aside from the appearance that is uniquely his, Rock Lee’s character is quite remarkable. He couldn’t use ninjutsu and genjutsu, but this didn’t faze him.

Instead, this young ninja tried his best to overcome his lack of talent in these areas.

Along with his awesome journey in Naruto, he also is a source of inspiration and some Rock Lee Quotes. You can use these quotes as your motto in life.

So, I have gathered some inspiring messages that this awesome young man had said throughout the series. 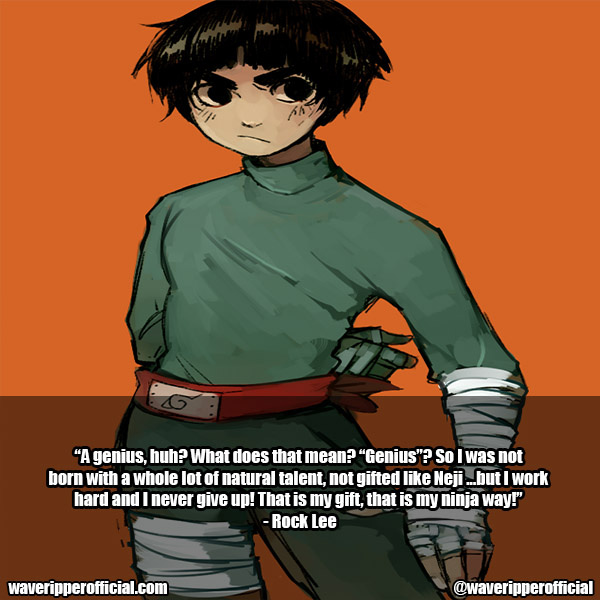 “A genius, huh? What does that mean? “Genius”? So I was not born with a whole lot of natural talent, not gifted like Neji …but I work hard and I never give up! That is my gift, that is my ninja way!” – Rock Lee

"A hero is not the one who never falls. He is the one that who gets up, again and again, never losing sights of his dreams." - Rock Lee

“If you believe in your dreams, I will prove to you, that you can achieve your dreams just by working hard.” – Rock Lee

“I want to show I can be a splendid ninja as well even if I don’t have ninjutsu or genjutsu… I want to prove it to the whole world!” – Rock Lee

“There are two different kinds of ninja. Those like you who are born with a natural talent and do not have to work at it. And those like me! The ones that have to train everyday of our lives!” – Rock Lee

"It is now…the time to carry through and protect one’s own way of ninja." - Rock Lee

“I am the Handsome Devil of the Hidden Leaf Village! My name is Rock Lee!” – Rock Lee

"The lotus of the Leaf Village blooms twice." - Rock Lee

"A dropout will beat a genius through hard work." Rock Lee

"Guy-sensei is the coolest! He practically GLOWS with cool!" - Rock Lee

"I would like to see how my moves will do against a descendant of the genius clan." - Rock Lee

"A rock thrown at a pole will not hit, but if one does not aim at the pole, it will hit! That is the law I used!" - Rock Lee

What is Rock Lee's catchphrase?

I don’t Rock Lee has any favorite catchphrase. The catchphrase in this context refers to words this protagonist says multiple times in the entire Naruto. It is more like a verbal expression.

No. Rock Lee stands no chance against Might Guy. In the series, Might Guy can open eight gates while Lee is seven.

Despite their similar features, Guy is not Rock Lee’s dad. Guy has clarified this matter while the younger one is still in the academy.

So, why do they look similar as if they are brothers? This is because Rock Lee wants to be like his idol with respect for Guy’s mentorship.

Before Lee joined Team Guy, he looks different. But since joining, Lee changed his appearance drastically.

Is Rock Lee stronger than Naruto?

Rock Lee could defeat some Naruto characters such as Sakura, Darui, Shikamaru Nara. However, Naruto is a lot stronger than Rock Lee.

After all, the legendary seventh Hokage possesses the spirit of the nine-tailed fox, which is rumored to be the strongest one.

Moreover, Rock Lee is best in taijutsu and is one of the best persons adept in hand-to-hand combat. Still, this skill might not be enough to defeat the future Hokage.

If you're a fan of Goblin Slayer, then you know that the show can be pretty dark and violent. But it's also full of inspiring END_OF_DOCUMENT_TOKEN_TO_BE_REPLACED

In One Piece, there are many memorable quotes from the different characters. Whether they are funny, inspiring, or heartbreaking, these quotes stay with you long END_OF_DOCUMENT_TOKEN_TO_BE_REPLACED

Kakashi Hatake is one of the most popular characters in the Naruto series. He is known for being a skilled ninja, as well as his END_OF_DOCUMENT_TOKEN_TO_BE_REPLACED

Might Guy is one of the most entertaining characters in "Naruto Shippuden". He's always cracking jokes, and he's never afraid to speak his mind.In fact, END_OF_DOCUMENT_TOKEN_TO_BE_REPLACED

In the anime series Naruto, there is one character who always stands out to me and that is Gaara. He is a complex character with END_OF_DOCUMENT_TOKEN_TO_BE_REPLACED