One Punch Man is an anime that has captured the hearts of many people around the world, whether it be because of its comedy or just how well-drawn and animated the show is.

But what really makes this show so great are all the inspirational quotes from Saitama that act as life lessons for us to follow in our own lives.

Here we will discuss 19 moments of inspiration from One Punch Man, and why they're important for everyone to remember! 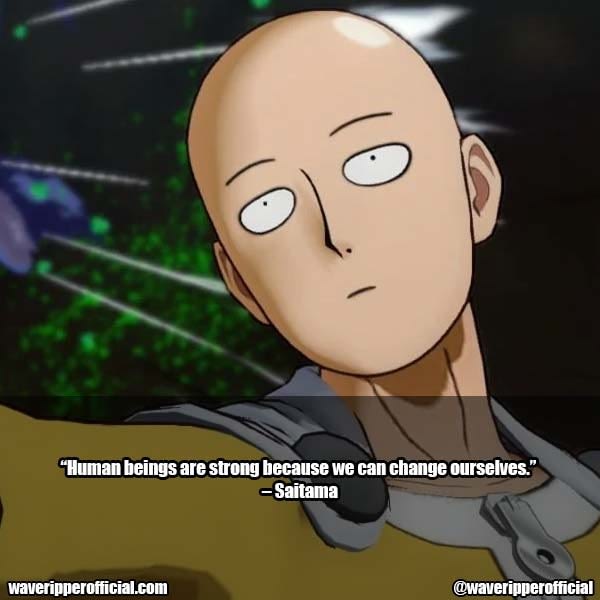 “Human beings are strong because we can change ourselves.” – Saitama

“When I was a little boy I wanted to be a hero. Not some damn business man. But a superhero who could send rotten villains like you flying with one punch.” – Saitama

“In exchange for power, maybe I’ve lost something that’s essential for a human being?” – Saitama

“If the heroes run and hide, who will stay and fight?” – Saitama

“Is that really the limit of your strength? Could you of tomorrow beat you today? Instead of giving in, move forward.” – Saitama

“You gotta train like hell until the point where your hair falls out. That’s the only way to become truly strong.” – Saitama

“I'm not saying I need fans, but it'd be nice if someone noticed what I've been doing.” - Saitama

“You are too young to worry about failure. In a pinch, just muddle through. The outcome won’t change, so that’s best.” – Bang

“You are calm and intelligent, but youth can invite disaster. Do not fight alone.” – Dr Kuseno

“I only accept the strong.” – Automic Samurai

“To calm the populace’s unease, a hero must be tough, strong and beautiful, as well as be able to promptly and splendidly eradicate evil.” – Sweet Mask

“Cretins who think they don’t need to evolve… have no right to pass on their genes!” – Dr Genus

“Why do you have to pay money to eat?! Can’t we all just share?! Where is freedom in the world?! All are slaves to labor!! The rich grow fat… While the poor die!” – Hammerhead

“If this is the path you choose to walk… I will not interfere. But if you turn the people against you… Will you be able to function as a hero? This worries me. But if you ever get in a tight spot… I will be there.” – Genos

“The popular will win, the hated will lose, it’s such a tragedy. Then I won’t lose to anyone. I will become the strongest monster ever and change this scenario.” – Garou

“What is evil? What is justice? All those pretty words mean I should go die because the majority wants me dead! This is absurd! They can all go to hell.” – Garou

“This strength doesn’t make any sense. It’s not fair. It’s like he’s made up of the world’s unfairness. As if he is the personification of justice… of course. Didn’t I already know? This world is unfair. Justice and evil are decided by others. That’s how the world is. To oppose the unfair power known as justice, I have to obtain the unfair power known as evil. To defeat the unfair beings known as heroes I have to become unfair being myself!” – Garou

“I know no one expects much from me. And I know better than anyone how useless a C Class hero is. I know I’m too weak even for B Class! I know more than anyone else that I’ll never beat you. But I must fight you anyway!” – Mumen Rider

Trivia Questions About One Punch Man

No one killed Saitama because he is very much alive. But if there's someone who could kill him, that would be a person who has god-like powers or is a god.

Despite his strength, One Punch Man is still a human being. Since he's a human being, he could die or be killed if he isn't careful. Saitama isn't an immortal.

No. Blast and Saitama are two different heroes in One Punch Man. You can hear his name referred to multiple times, but this hero was never shown, until recently.

Blast is an S-class hero who travels around the world collecting some weird cubes as a hobby.

A lot of heroes in the series seem to look up to him, except Saitama who doesn't have any inkling who the person is.

What does one punch man always say?

Well, Saitama always says this, "I'll leave tomorrow's problems to future me." Ultimately, this hero is saying to us that human strength lies in your capability to create changes.

Hmm. This one is really difficult to answer. But, if Saitama surpasses his current strength level, he might beat his old self. One adage says that the only enemy you must beat is yourself.

Moving forward, One Punch fans! What are your favorite Saitama - One Punch Man anime quotes in this list? Or, you can check out our My Hero Academia Quotes.