9 Kirito Quotes To Live Your Life By

To understand his complexed character better, there are some Kirito SAO quotes that you need to read.

Maybe you should even spend some time contemplating his favorite quotes. What do they mean and what is he trying to tell you? 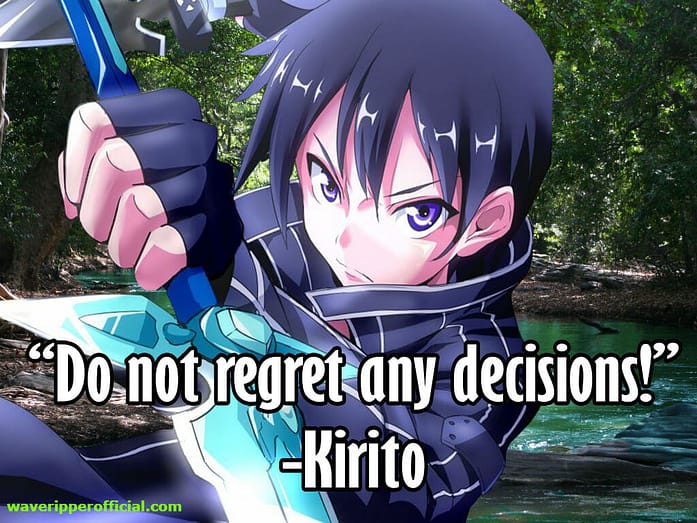 "This world is just an illusion. Don't let it fool you!'' - Kirito

''Real pain is the result of losing someone'' - Kirito

''The reason I got stronger, is to survive!''

''Levels are just numbers in this world'' - Kirito

"It is pointless to question who someone really is because we would never know." - Kirito

"I am better at using swords than words" - Kirito

"I'd rather die with someone than let that person die before my eyes." - Kirito

"I can't just sit back and watch someone die. I'd rather die alongside them than do nothing." - Kirito

What You Need To Know About Anime Kirito

Kirito real name is Kazuto Kirigaya and is one of the world’s leading fictional characters. He is a member of the cast of Sword Art Online and his character was created by Reki Kawahara.

To most of us, he is better known by his short name, Kirito, but he was indeed originally called Kazuto in the Sword Online novel published back in 2002.

Author Reki Kawahara novels are set in a video game. In many ways, the series reminds of the Matrix.

In Sword Art Online, Kirito appears as a teenager and is one of the first beta-testers of this multi-player game.

When the game goes on general release, Kirito and the rest of the players discover that they can’t log out.

That is really the last thing you want to happen to you, and it makes you want to ask questions about the future of virtual reality.

Today, Kirito from sao is one of the most recognized characters in anime, and perhaps the most popular ones.

Why You Should Watch Sword Art Online

There are many reasons you would follow and watch Sword Art Online. When you first start to watch the series, you may not make the association with what is going on in real life.

But, the character of Kirito will make you stop and think. What is the future of virtual reality and computer gaming? Could we actually lose ourselves in a game?

Many claim that Sword Art Online is a rather accurate picture of the future? It makes you wonder what would happen if we could upload our souls into a game?

Another reason, you should watch Sword Art Online, is because of the amazing action scenes.

In my point of view, Sword Art Online is the most action-packed anime and manga series. If you can’t get enough it, you can buy the original novels online from places such as Amazon.

Not all anime characters have something interesting to say but Kirito certainly does.

I even find some Kirito quotes inspirational. A little while ago, I became so inspired by Kirito quotes that I started to collect them.

As a result, I have decided to share some of them with you.

If you feel that I have missed out on any, please let me know. I know that Kirito is a character who has a lot to say for himself, and I can’t wait to find out if you have got a couple of favorite Kirito quotes.